The following is an objective review of the Zilliqa project. The review is based on certain criteria, which we think are important for an ICO project to succeed. We measure a successful ICO by short and long term ROI estimation. The following is not financial advice.

Zilliqa is a new blockchain platform that is designed to scale securely in an open, permission-less distributed network. The idea of the Zilliqa blockchain was conceived in the Computer Science Lab at the University of Singapore, based on a paper written by Lui Loo, the cofounder of Kyber Network.

To date, 870 Dapps (Decentralized apps) are being built on top of the Ethereum Blockchain, aiming to attract millions of users. The current Ethereum Blockchain max transaction rate is approximately 15 transactions per second, which is obviously not enough to handle the expected transaction volume, even if only a few Dapps succeed. This situation is making Dapp developers seek off/on-chain solutions.

The project is aiming to serve as an alternative, scalable and secure solution for Dapps to be built on.

Let’s get going with our evaluation!

A scientist and practitioner in building secure systems, ranging from blockchains to web browsers and applications. He was the technical lead for several national cybersecurity projects in Singapore and holds a PhD from the National University of Singapore.

An Assistant Professor at the National University of Singapore. Together with his PhDs, his lab is actively publishing many blockchain-oriented papers. Projects like Dexecure, TrueBit, Smart Pool, Kyber Network and now Zilliqa are based on these papers. He has received several premier awards, including the Top 10 Innovators under 35 (MIT TR35 Asia) in 2017.

Amrit is a Research Fellow at the National University of Singapore. He holds a PhD from Université Grenoble-Alpes, France. Prior to his PhD, he obtained an Engineer’s diploma from Ecole Polytechnique, France, where he studied Computer Science and Mathematics. His research interests broadly span security, privacy and applied cryptography.

Founded StrongHold Labs, he is also a Science Fellow at MIT Media Lab and Visiting Professor of Financial Engineering at EPFL. He has had prior experience in management positions at Bank of America, Merrill Lynch, Credit Suisse, and other major financial organizations. Has a PhD from the Moscow State University.

A researcher working on cryptocurrencies, smart contract security and distributed consensus algorithms. He is also a regular invited speaker at Bitcoin and Ethereum workshops such as Devcon. He founded Kyber Network, a decentralized cryptocurrency exchange. Kyber Network recently raised 60M USD and is now valued at approximately 200M USD @ coinmarketcap.

Stuart Prior is a Fintech veteran with 20+ years in Corporate and Investment Banking. Stuart specializes in leading corporate banking initiatives for the adoption of blockchain technology and Crypto Finance. Throughout his career, he has focused on the development of banking technology applications including Ultra High Frequency / Low Latency trading and the development of large scale data management platforms. Over the years he has worked with many of the largest banks in the world, including Credit Suisse and Deutsche Bank.

Zilliqa project prides itself on being “The world’s first high-throughput public blockchain platform”. High-Throughput Computing or HTC is a way of utilizing computing power by breaking its load into many small loosely-coupled tasks and distributing the workload across a grid of many different computers.

Zilliqa utilizes HTC and uses network sharding – “dividing the mining network into smaller consensus groups called shards, each capable of processing transactions in parallel”, supposedly Zilliqa’s blockchain will process more transactions per second as more mining nodes join the network. This may sound intuitive, but in reality, the greater the number of nodes the greater the processing time.

In order to understand the framework of Zilliqa, one must first understand the general idea of consensus. A consensus in Blockchain is the mechanism in charge of approving new information being appended to the blockchain across all the decentralized nodes, the most common consensus protocol is Proof of Work (POW), which is usually referred to as mining.

In a high level, the Zilliqa framework is built of two main components:

An independent group of nodes which are responsible for validating a portion of the transactions. In order to do so, each shard will need to decide on its own consensus. This will be done by another consensus approach named Byzantine Fault Tolerance Algorithm or PBFT protocol. At a high level, for each shard, a leader is selected. This leader will validate a constant amount of transactions and create a new block. Then the block will be validated by the other nodes of the shard. If the vast majority of the nodes in a shard accept the block, it will be addressed to the DS Committee in order for the block to be accepted in the general consensus of the Zilliqa blockchain. 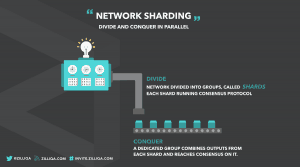 This is a group of nodes that manage the activity of Zilliqa’s framework. We can divide their role into two main parts: Building the general consensus (the Zilliqa general blockchain) and maintenance of the Zilliqa framework.

As we mentioned before, each shard is only aware of the transactions that were assigned to it. After some shard has finished creating a new block it is sent to the DS Committee. The DS Committee needs to decide whether to add this block to the general blockchain. This is done by executing another process of the PBFT consensus protocol.

Zilliqa also utilizes the Proof Of Work consensus approach in its framework. POW is used solely for the purpose of establishing mining identities both for the DS Committee and for the shards. 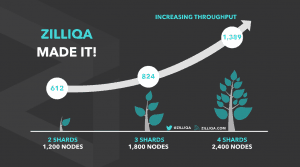 ZIL token use – the fuel of the blockchain

ZILs are the driving force behind the Zilliqa Blockchain, as ETH is for the Ethereum Blockchain.

ZILs are consumed by paying fees to the network nodes. One must hold ZILs in his wallet in order to transfer ZILs or other future tokens to be created on top of the Zilliqa blockchain (Made equivalent to ERC-20 tokens on the Ethereum blockchain, serving hundreds of ICOs each month).

Before Zilliqa main-net goes live, Interim ERC-20 tokens will be generated and allocated to various parties, including contributors of the ICO.

These interim ERC-20 tokens will be issued to the initial holders and be transferable within 2 weeks after the completion of the ICO. They are expected to be migrated to the Zilliqa main-net as ZIL tokens in 2018.

Whitelist: KYC via Bitcoin Suisse. The whitelist is closed.

The team initially intended to raise a total hard cap of 20M USD (Private sale- ~12M USD, public sale – ~8M USD). Unfortunately (or not 😊), the ETH/USD price had spiked since the end of ZIllilqa’s private allocation, and the 44,000 ETH raised turned out to be more than 20M USD. The team announced that their public allocation was canceled as they had raised the money needed for future development.

Hearing the voice of their community, the team recently announced that it will raise their hard cap a bit (+4445 ETH) and reopened their public allocation period.

Stage of The Project

To The Full Evaluation

Team & Advisory board: Project is led by highly respected PhD scientists and well-respected figures in the crypto ecosystem. Score 9

Token use: ZILs tokens are the fuel for the blockchain, high correlation between token price and the success of the project. Score 9.5

Whitepaper: Published a technical and a business whitepaper. Both have good detail. Score 9

Backend and Technology: Brilliant implementation of the network sharding protocol, which enables higher transaction rates with an increase in the number of nodes in the network. Score 9.5