2017 brought the crypto market to the collective consciousness, but the declines of 2018 replaced enthusiasm with uncertainty. Can this trend change by the end of the year?

This week the prices have brought the green color back to the market. The Bitcoin price climbs, and the alternative coins are celebrating and remind us of the days we had already forgotten. It is certainly possible that another Alt season is coming, as the graphs of some of the alternative coins show a change in trend. The end of the year is near, and there is still a chance that the market will recover to some extent after a particularly bearish year.

History does not repeat itself in the same way, but if we conclude from past market behavior, there is still time until the end of the correction and a real change in trend beyond the technical analysis. However, the crypto market is not a predictable one, and there is some difficulty in predicting trends. It appears that the ecosystem continues to accelerate and large companies keep entering the field and raising capital for the development of the market infrastructure. In addition, regulatory clarity is beginning to take shape, and many countries have already begun to regulate the issues relating to cryptocurrencies.

In summary, the market is signaling a mixed trend that on the one hand makes investors uncertain and on the other, it fills them with hope. In this situation, another media hype can certainly lift another wave. 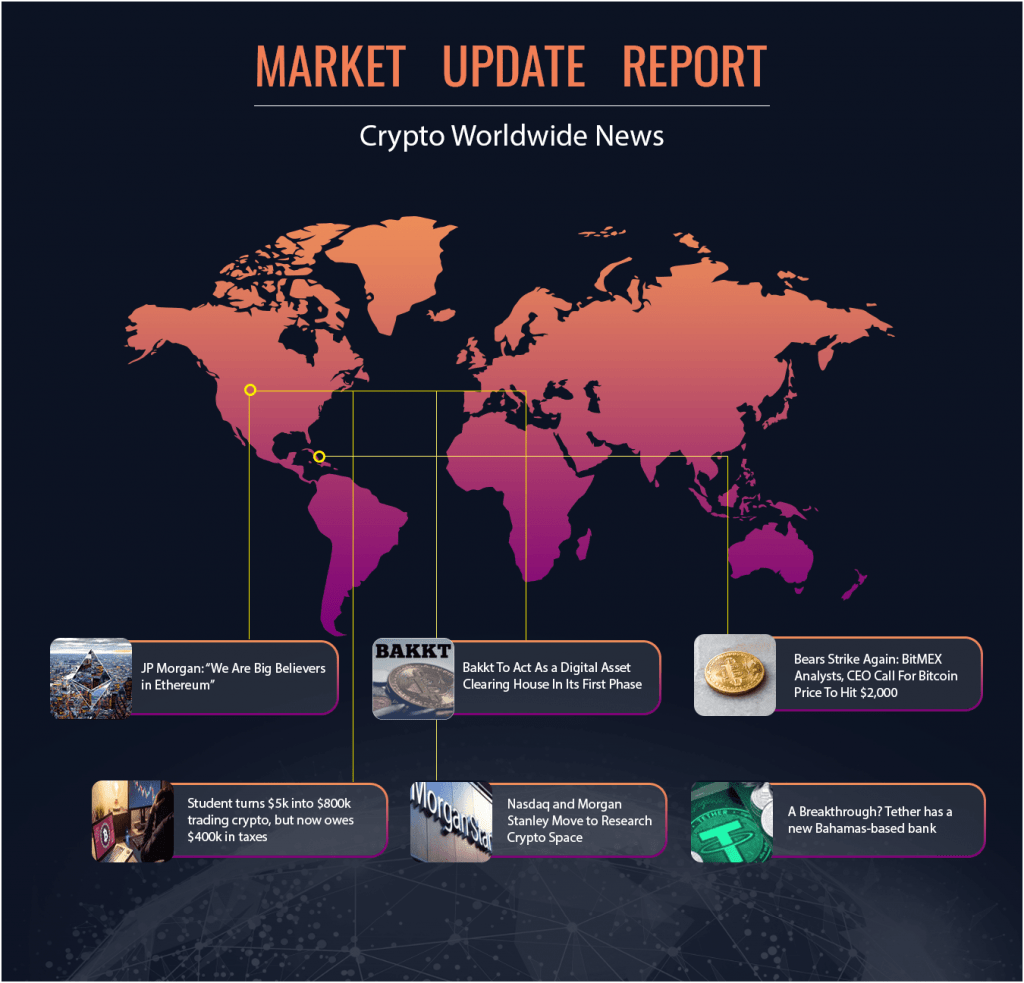 JP Morgan: “We Are Big Believers in Ethereum.” Among the numerous blockchains in existence, JP Morgan has singled out Ethereum for praise since the company can create its own enterprise-based solution using the same model.

Bears Strike Again: BitMEX Analysts, CEO Calls for Bitcoin Price to Hit $2,000. Arthur Hayes, the CEO of Hong Kong-based crypto exchange BitMEX and a group of analysts, believe that the lack of volatility in Bitcoin value looks similar to a trade pattern in 2014 and could drag the asset into a bearish run down to $2,000

STUDENT TURNS $5K INTO $800K TRADING CRYPTO, BUT NOW OWES $400K IN TAXES. A bitter-sweet story has been told by a California student who made a huge fortune with just $5k from the 2017 bullish run, only to realize that he hasn’t paid crypto-related taxes which now amount up to $400k. He’s asking for a way out of the mess.

Bakkt to Act as a Digital Asset Clearing House In Its First Phase. The crypto exchange will partner with the Intercontinental Exchange’s (ICE) markets to provide digital asset clearing services which will, in turn, encourage institutional investors to join the crypto markets.

A Breakthrough? Tether has a new Bahamas-based bank. Owners of controversial stablecoin, Tether have announced that they have opened a $1.8 billion bank account in the Commonwealth of The Bahamas at Deltec Bank & Trust Limited. It is hoped that this will finally end USDT’s shaky price.

NASDAQ and Morgan Stanley Move to Research Crypto Space. The traditional institutions are now the latest to indicate interest in the nascent industry. Morgan Stanley even claims that its solution can finally end the price manipulation issues faced by cryptocurrencies.

Traded around $6,400, trend rising this week. Resistance at $6,500. Support at $6200. It can be seen that the triangle has been breached not far from the area marked by previous technical updates. There seems to be an attempt to break above in the short term, and it seems that the resistance at $6,800 is still strong.

Against the dollar traded around $210 resistance at $220 is being tested. In this range support $200.


Against Bitcoin, it traded around 0.093BTC on its way to test the resistance at 0.1BTC. Sharp gains follow the expected fork that also affects trading.

Against the dollar traded around $170 in an attempt to break up the resistance around $180 support in this range at $160.


Against Bitcoin, after approval of the 0.023BTC support, the price continues to rise. Traded around 0.026BTC and the market is testing resistance in this range.