For the first time – our market update report was broadcast live on Facebook. Congratulations! Those who did not watch live can follow the link to watch the broadcast. Many thanks to Jonathan Levy and Alon Goll of Bitcoin Academy for making it happen. You are invited to register for free courses on their website. 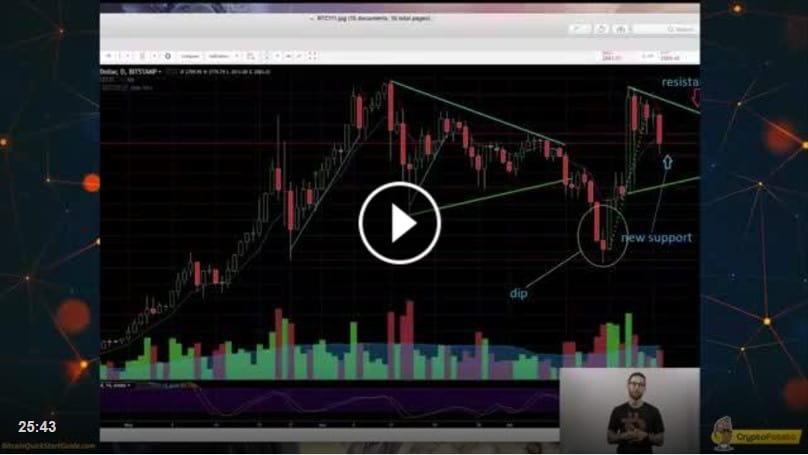 And now let’s talk about what’s going on

This week, miners started operating under the New York agreement, and therefore, adopted SegWit in response. Overall, Bitcoin had an amazing week… jumping from a recent record low of $1,830 to over $ 2,900 (!). I know a LOT of folks out there were just waiting for this opportunity, and didn’t hesitate to jump on the opportunity to buy bitcoin at this incredible price.

In the last two days, China’s BTCC mining pool announced that they WILL be proceeding with an unofficial hard fork on August 1. The new currency that comes out of the fork will be called Bitcoin Cash, or BCC, and as long as you are holding your own private keys when the fork happens, you will hold your current balance in both currencies after the fork.

Coming back to BTCC and this landmark decision, as you guys know, mining pools make up the majority of Bitcoin mining done today. A mining pool is basically where large groups of miners all over the world join forces and mine together more efficiently. A new mining pool, VIA BTC, has actually sprung up and announced that they will support BCC mining on August 1. This is a surprise announcement that came from nowhere, but we are already accustomed to shock and awe like this in the crypto world …  If that wasn’t surprising enough, get this: Currently, BCC futures are trading at around $ 460 – for a coin that doesn’t even exist yet!

In the past 24 hours we have witnessed a violent correction to the steep rise that came after bitcoin’s plummet last week. This saw Bitcoin drop from it’s high at $2,900 back down to the $2,550 range that we were seeing before the drop to $1,800. Plus, in the last few hours, the correction has been moderate and fairly stable – though, as we all know, stable is a really relative term in the crypto world. 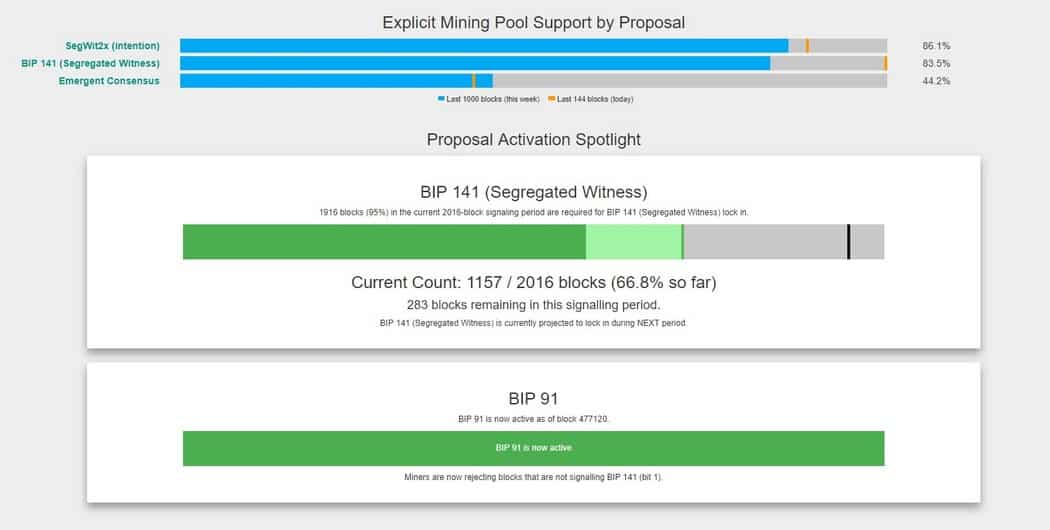 Altcoins have seen a downward move against the dollar that’s even steeper than bitcoin’s correction. As altcoin holders were trying to sell off their altcoins, they had to get bitcoin to do so, which arguably mellowed the correction in bitcoin’s dollar price.

There’s been a tremendous amount of trading done between bitcoin and altcoins, and major altcoins fail to find footing against bitcoin.

The market has been very volatile in the recent period as people anticipate the events of August 1. Now more than ever, we advise extreme caution when trading.

The decline in altcoins is reflected in Bitcoin’s market cap dominance over altcoins – Right now, 48% of the crypto market is made up by Bitcoin and it seems that the trend will continue to favor Bitcoin for the indefinite future 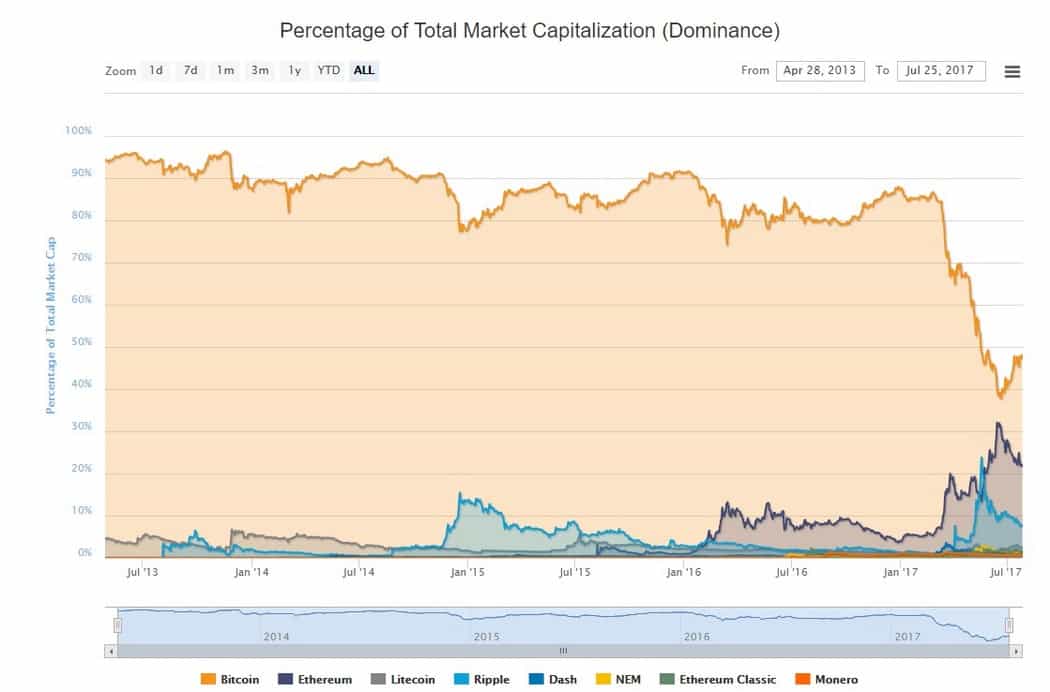 You can also see the market value of all of the altcoins in the additional graph. It’s possible that we’ve reached a peak in valuation of the total market cap. 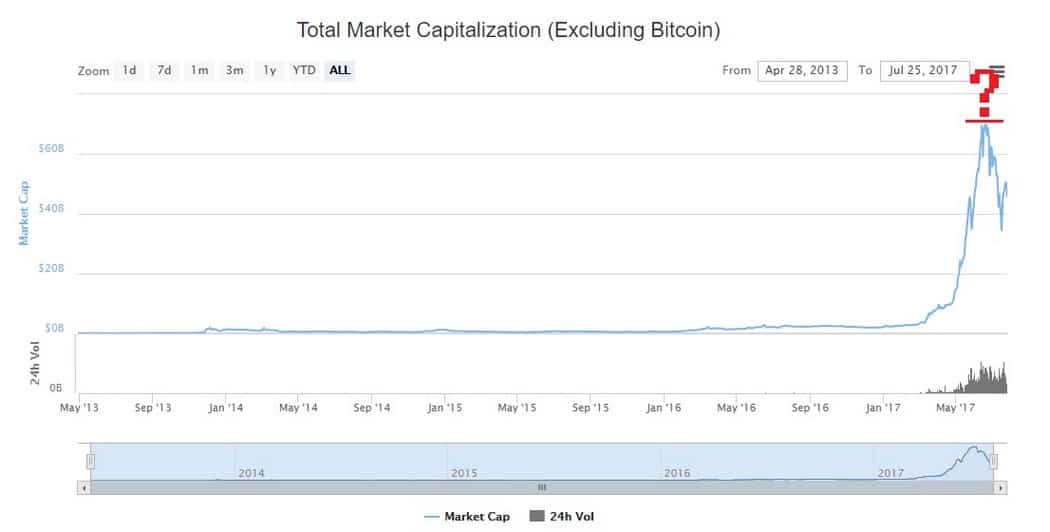 As we said, Bitcoin experienced a dramatic rise, and violent and volatile correction. This is all happening because of Bitcoins increasing mainstream adoption, combined with mounting anxieties over the events of August 1st. So the current prices are around the $ 2,400 level, with price resistance at around $ 2880. It is likely that an increase above this level will lead us to new highs, but only after some of the uncertainty over Segwit is relieved. 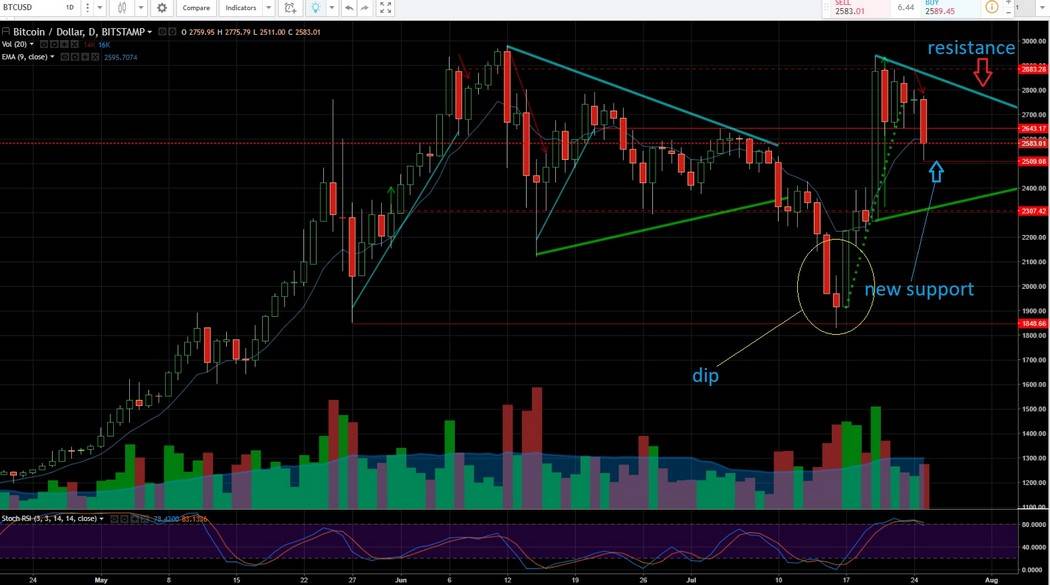 In the previous week’s update CryptoPotato reported a loophole in multi-sig wallets that caused tens of millions of dollars worth of Ethereum to be stolen. From the technical perspective – if the level of 0.075 BTC to ETH breaks it seems that the market will panic and Ether will fall. In addition, we saw another hack this week, where $4.5M worth of Veritaseum -Tokens were stolen. 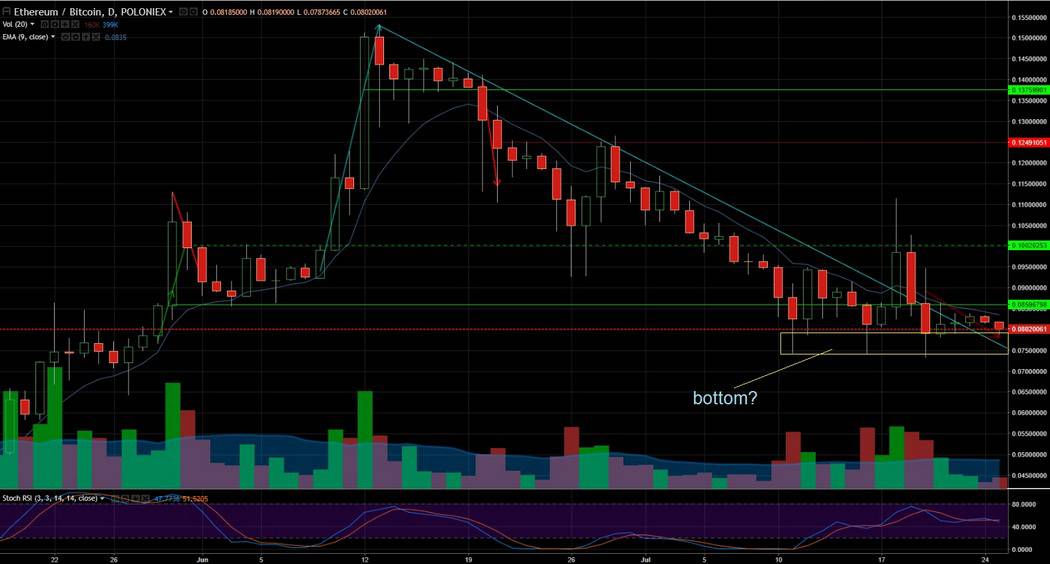 On the dollar trading – The $ 200 zone is an important support level right now. Of course, Ether is affected by Bitcoin, so this depends on Bitcoin not declining. As we have said, we see the effect of Bitcoin on the recent dollar value of the Alts as a whole. 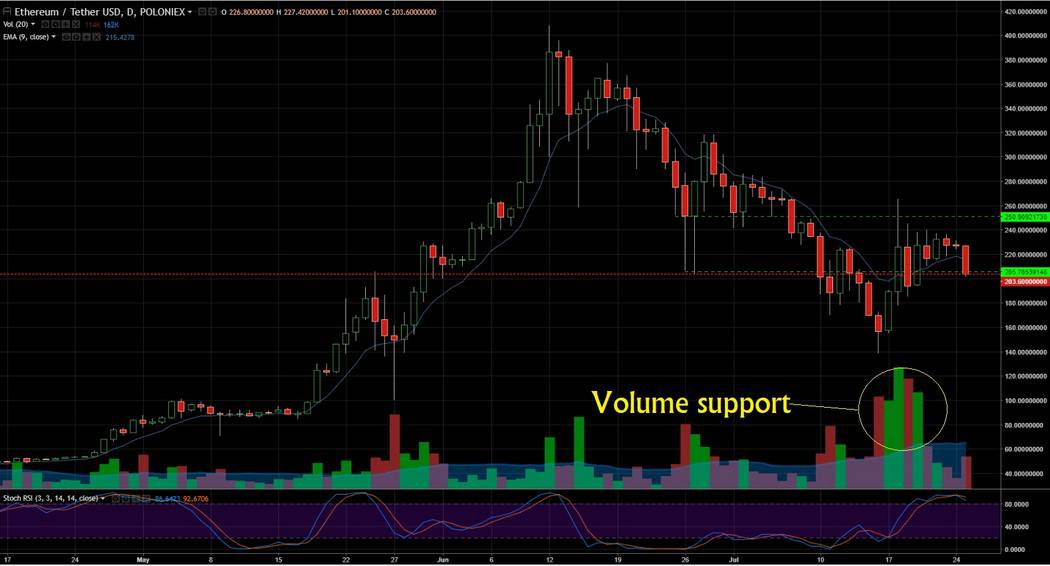 Since the adoption of Segit in Litecoin, the coin has come to life and there is more interest than ever before. Will Litecoin become a hedge source for Bitcoin? It seems that the market likes this old altcoin.

Litecoin has been on a up trend since April, as you can see in the graph. At the moment the supports are at around 0.015-0.016 BTC (in the graph marked with a rectangle). Resistance is waiting at the 0.02 BTC level in the red rectangle. It is also possible that the market will examine the trend line and see a more massive correction. 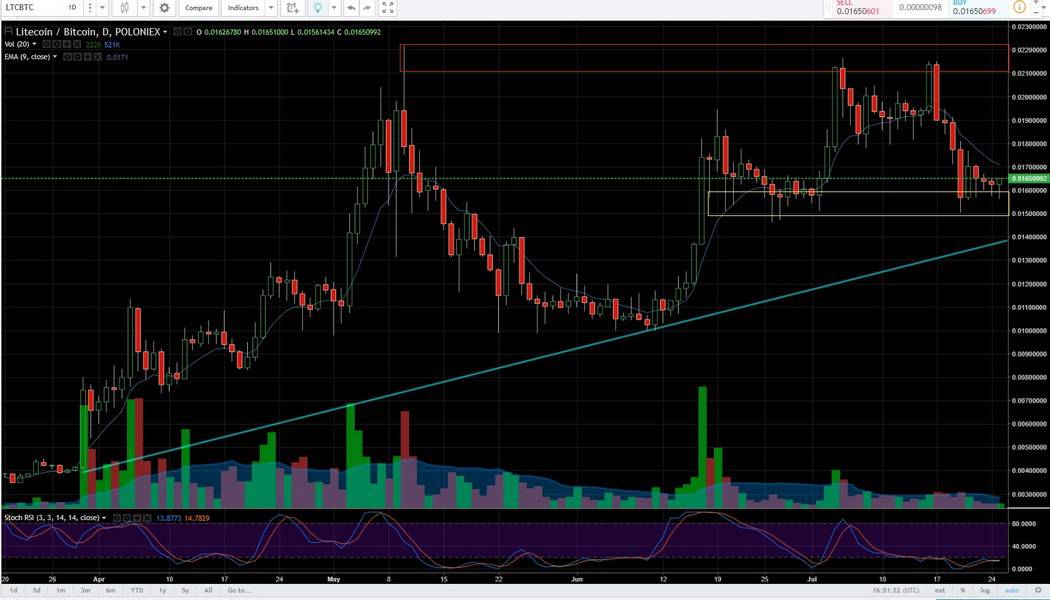 We’ve been following Dash closely with regular updates on CryptoPotato.com The currency behaved as we expected in terms of ranges of fluctuations. At the moment, DASH is in the resistance zone at 0.077-0.084 BTC. If these rates break, we will return to the March highs above 0.1 Bitcoins for one! The total currency appears to be in a positive trend. 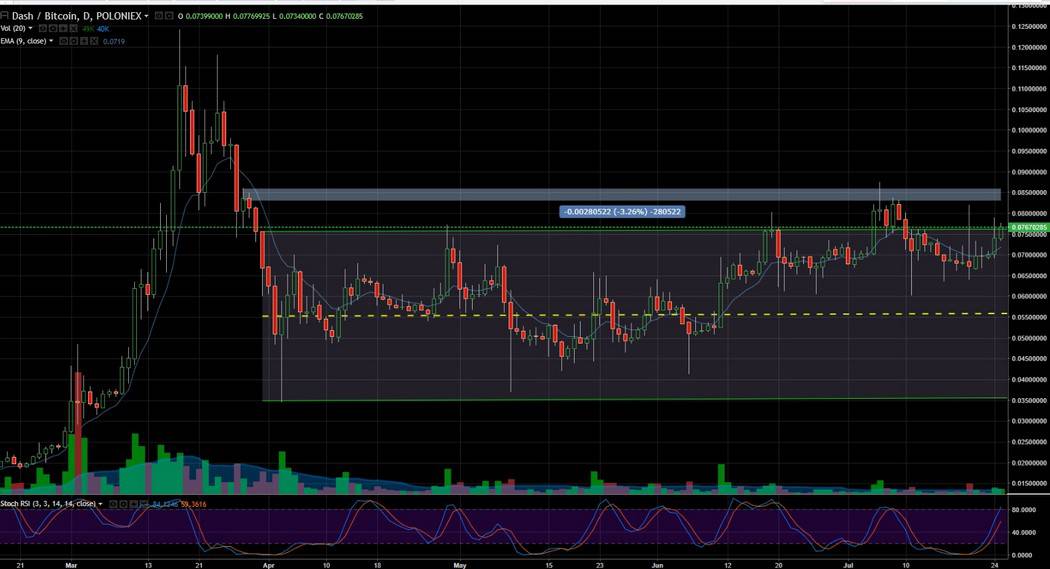 DASH is a very volatile coin vis-a-vis the dollar: since the price has crossed the $ 120 level. The Bitcoin rate, of course, is the influencing factor. 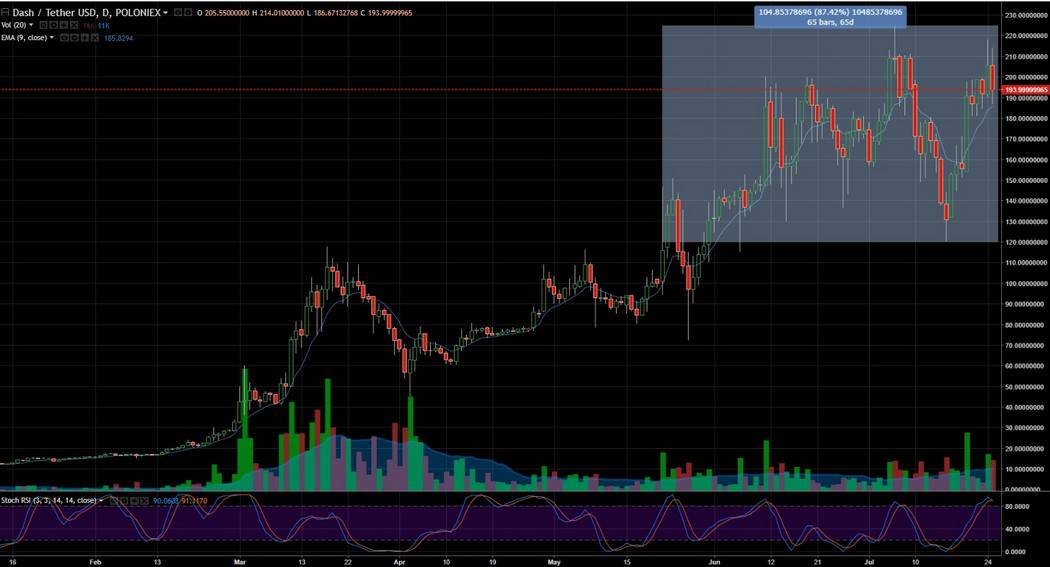 In a continuous uptrend from the beginning of the year, like many alts. Technically, there is currently support.

We see high potential in weak instant buying as a panic market, and in addition, the analysis of the previous surveys shows the trend in the currency, and according to the graph, we are still in a long term trend. The 0.0004 BTC area looks like a strong support. Marked in the yellow rectangle support and resistance areas are red. 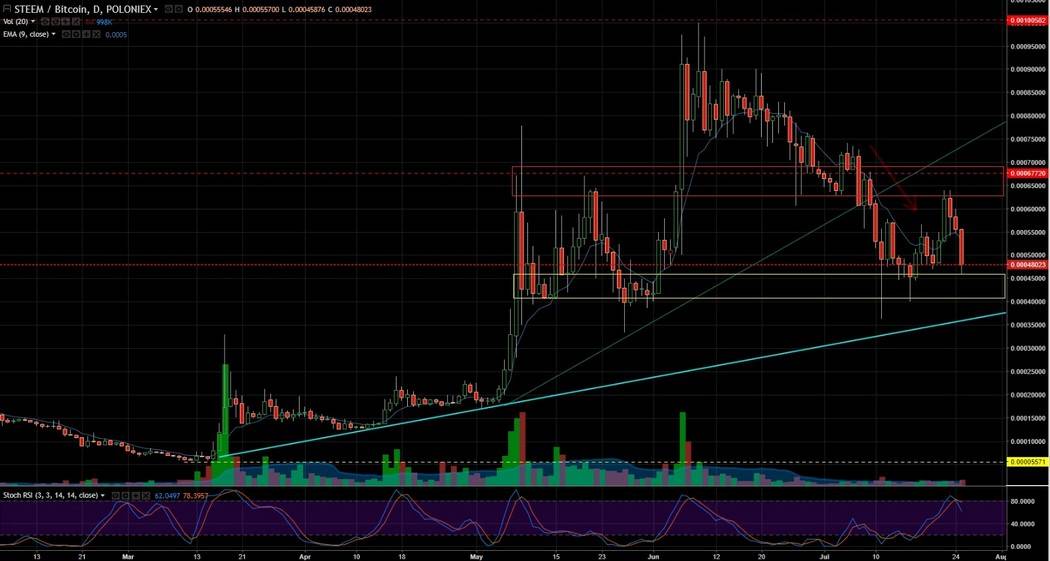