Although the 2018 crypto bear market seems to be fraught with bad news, there have been some less obvious benefits. As it turns out, the decline in Bitcoin prices has been increasingly beneficial to the development and functionality of the Bitcoin network.

During the peak of the crypto bubble (around November and December 2017) the Bitcoin network was so clogged up with transactions, it could take several hours to get your orders confirmed (if they happened at all). Since prices began dropping around February, these network confirmation problems have largely vanished, as displayed on the following chart:

Lower transactions in 2018 have helped to decongest the network and allowed transactions to be confirmed faster. In another example, we can see the TPS (Transactions Per Second) rate over the same period:

What have been changed since SegWit and Lightning

Over the past few months, the Bitcoin network has been developing into a more robust form thanks to new solutions like SegWit and the Lightning Network.

SegWit (short for Segregated Witness) is an upgraded protocol that aims to solve the scalability problem by changing the way information is stored on the blockchain. It was first introduced to Bitcoin in August 2017 but has slowly increased in its utility during the bear market.

The maximum block size on the Bitcoin blockchain is 1 MB, which restricts Bitcoin to only being able to process 7 transactions per second. SegWit was initially developed to solve a bug in Bitcoin’s code that allowed anyone to make small modifications to the transaction ID. SegWit fixed the problem by removing signature information from the main transaction block and storing it outside.

Removing signatures also helped reduce the weight of the block, allowing more transaction data to be input, which helped increase the speed of confirmed transactions.

This chart shows the adoption rate of the Segwit solution. As you can see, shortly after the number of transactions plunged, adoption of Segwit spiked. And, as the price of Bitcoin has relaxed, more and more providers have begun to use Segwit: 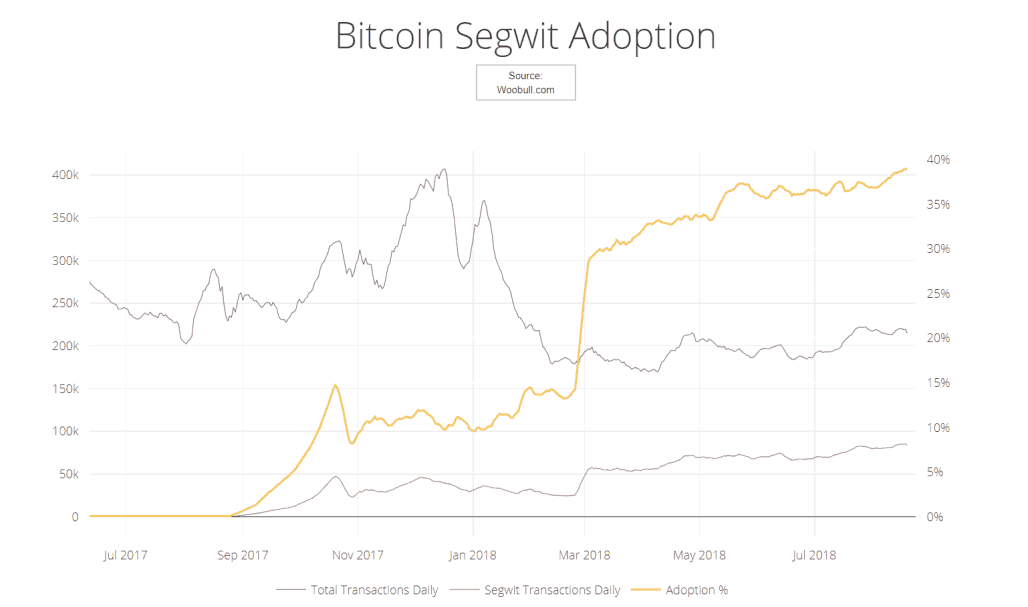 What’s going to happen on the next run to $20K?

When the next bull run occurs is anyone’s guess, but as these solutions continue to strengthen the Bitcoin network, we can be sure that another run up to $20K per BTC will provide a much smoother transactional process for everyone.