The Blockchain revolution is being compared to the Internet in the 1990’s, with Bitcoin and Ethereum being labeled as the Microsofts and Amazons of their day. Millions of dollars and thousands of development hours have been invested into these networks with the goal of replacing our current financial and economic system with one that is more decentralized and secure. However, despite their incredible potential, Bitcoin, Ethereum, and most other distributed networks are still plagued by the fundamental problem of scalability.

Ethereum founder Vitalik Buterin first came up with the term ‘Scalability Trilemma’ to address the issue of how we develop a scalable, decentralized, and secure blockchain, without compromising any one of those components.

Currently, most Blockchains fit into 2 camps:

These are permission-less and censorship-resistant networks that give anyone the power to use and build on them. Decentralized systems operate by consensus, where transactions are verified by a group of nodes as opposed to an individual node. Decentralized systems are also immutable and offer no single point of failure.

Examples of Decentralization and Secure Blockchains:

As the first blockchain, Bitcoin is the most secure and decentralized. It currently implements what is called Sovereign grade censorship resistance.

Sovereign grade requires enough decentralization to secure a network from being manipulated or attacked by Governments (in other words; resistant to Government censorship).

This is the case with the Bitcoin blockchain, which is primarily built to store value, and therefore cannot compromise security.

Ethereum’s blockchain is more focused on providing an infrastructure for developers to create decentralized applications, as well as peer-to-peer contracts (aka Smart Contracts).

Ethereum is also regarded as being highly secure. However, it favors a different kind of decentralization that is based on Platform grade censorship resistance.

Platform grade requires just enough decentralization to assure developers that no centralized stakeholder (like a Facebook, Google or Apple) can alter the rules on the platform in ways that would disrupt their ability to continue building on it.

Arguably, both of these Blockchains are leaders in the space not just because of their first mover advantage, but because they stuck to a core ethos of sovereign grade or platform grade censorship resistance, which reliably convinced many to contribute to developing their ecosystems.

However, in spite of their leadership positions, these blockchains still need to scale, so they are not left behind as newer, faster alternatives arrive. To solve scalability problems for blockchains that are fundamentally Decentralization and Secure ‘layer 2 solutions’ have to be built: These are essentially separate networks that break off from the main blockchain in order to process smaller transactions, and then feed data back to the main blockchain in chunks. 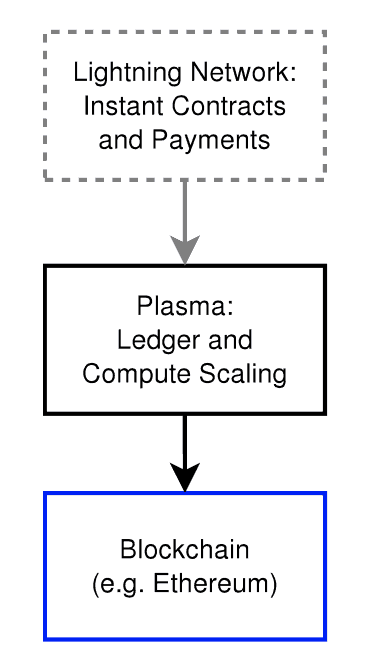 Plasma is a layer 2 solution created by Buterin and Bitcoin Lightning Network co-creator Joseph Poon. With Plasma, ‘child-chains’ are created on the Ethereum Blockchain (main-chain), with their own validators.

By using Plasma, many complex operations can be performed at the child-chain level. Such as the smart contracts that enable the network to run entire applications with many thousands of users, while only interacting with the Ethereum main-chain occasionally. The end result is an increase in tps and lower transaction fees.

Other solutions like the Raiden Network provide off-chain scaling by opening multiple channels.

The Sharding method distributes nodes to certain groups so that nodes don’t have to validate the whole of a Blockchains history before validating a new transaction.

Like Plasma, the Lightning Network enables transactions on existing Blockchains to be faster, and more frequent. This ‘layer 2’ solution stores smaller, less significant transaction ‘off-chain’. Off-chain transactions are grouped together and validated independently by small communities. Once validated, they are sent back to the main Blockchain, where they can be processed as one single transaction. 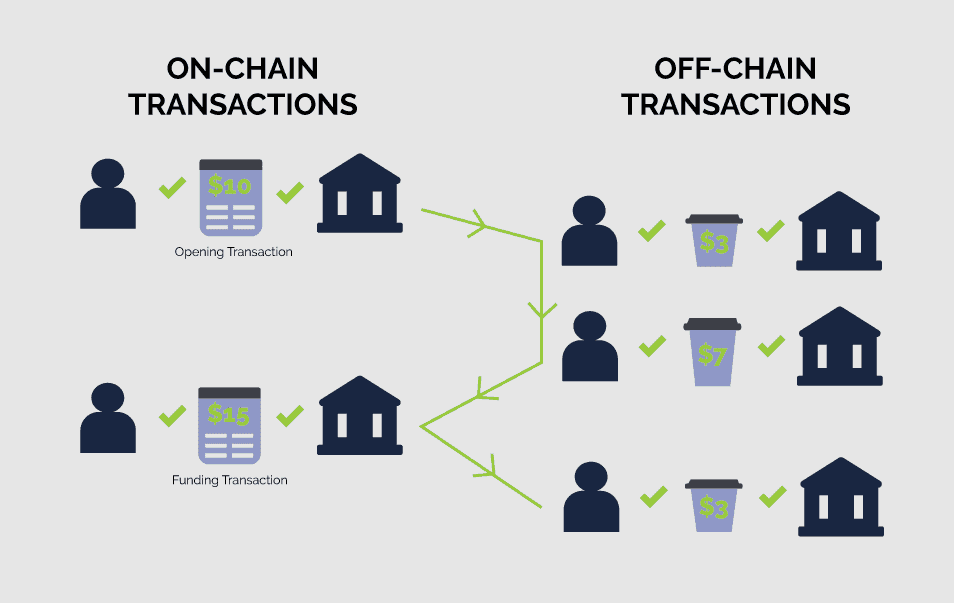 In this visual above, a payment channel is opened between a consumer and a coffee shop. The channel is funded with $10. This $10 transaction is validated on the main blockchain.

From there, all other smaller transactions that occur to add up to that $10 are made ‘off-chain’.

If the consumer wants to add another $15 to the channel, that transaction will be recorded on the main blockchain, then further smaller transactions can be made, and validated off-chain once again.

The reverse of this process can also be done, where instead of first funding the channel with $10, the consumer and coffee shop can setup an IOU on the blockchain, enabling the consumer to purchase coffee for free (and recording those transactions ‘off-chain’) until they’ve bought $10 worth of coffee. Then the consumer will make one $10 payment on the main blockchain to close out their tab.

Of all the scalability solutions offered for the Bitcoin and Ethereum Blockchain, the Lightning Network and Plasma solutions seem to show the most promise, with the potential to achieve tens of thousands of transactions per second in the near future, while also reducing the costs per transaction.

This pattern of growth (faster transactions: cheaper transactions) is more in line with how a network is supposed to scale and has been observed in previous innovations like the Internet or cell phones.

In response to the Blockchain Trilemma, a new class of Blockchains has been developed with the goal of overtaking Bitcoin and Ethereum by achieving the type of scalability that enables hundreds of thousands (or even millions) of transactions per second.

However, many of these companies achieve this knowing that they have to compromise decentralization (and therefore security) in order to validate transactions in less time.

Cosmos’s goal is to become the “internet of Blockchains” by solving the problem of scalability, while also offering Interoperability (the ability for multiple Blockchains to communicate with each other).

With Cosmos, scalability is achieved through the vertical and horizontal approach: With vertical scalability, additional resources are added to a single system node or computer, resulting in additional CPU, processing power and memory for the operating system and applications to run faster. With horizontal scalability, multiple parallel chains are running the same application, and are operated by a common validator set.

EOS is an Ethereum competitor that uses ‘delegated proof of stake” to achieve faster transactions. With this method, the network nominates multiple “witness nodes” as representatives who help to make certain high-level decisions more quickly without polling the entire network. This approach essentially hands control to about 100 witnesses who are voted in by the community.

It’s easy to see how such a centralized system could be influenced by internal politics and self-interest (people’s vote strength is determined by how many tokens they hold. This means that people who have more tokens will influence the network more than people who have very few tokens).

However, this (along with other system upgrades) has enabled EOS to run tests where they achieved 50,000 tps.

Hedera Hashgraph is a DLT that aims to provide users with all the benefits of blockchain, without the limitations. The system requires no proof of work, proof of stake, or layer 2 solutions.  Instead, it offers a completely different architecture for distributed nodes to achieve consensus.

Leemon Baird invented Hashgraph and is also the cofounder and CTO of Swirlds, a platform for distributed applications. What makes Hedera unique is that their consensus mechanism is based on a virtual voting algorithm combined with a gossip protocol. With the gossip protocol, each node “gossips” about the information it learns from a transaction, allowing data to spread more quickly from one member to the next at random. 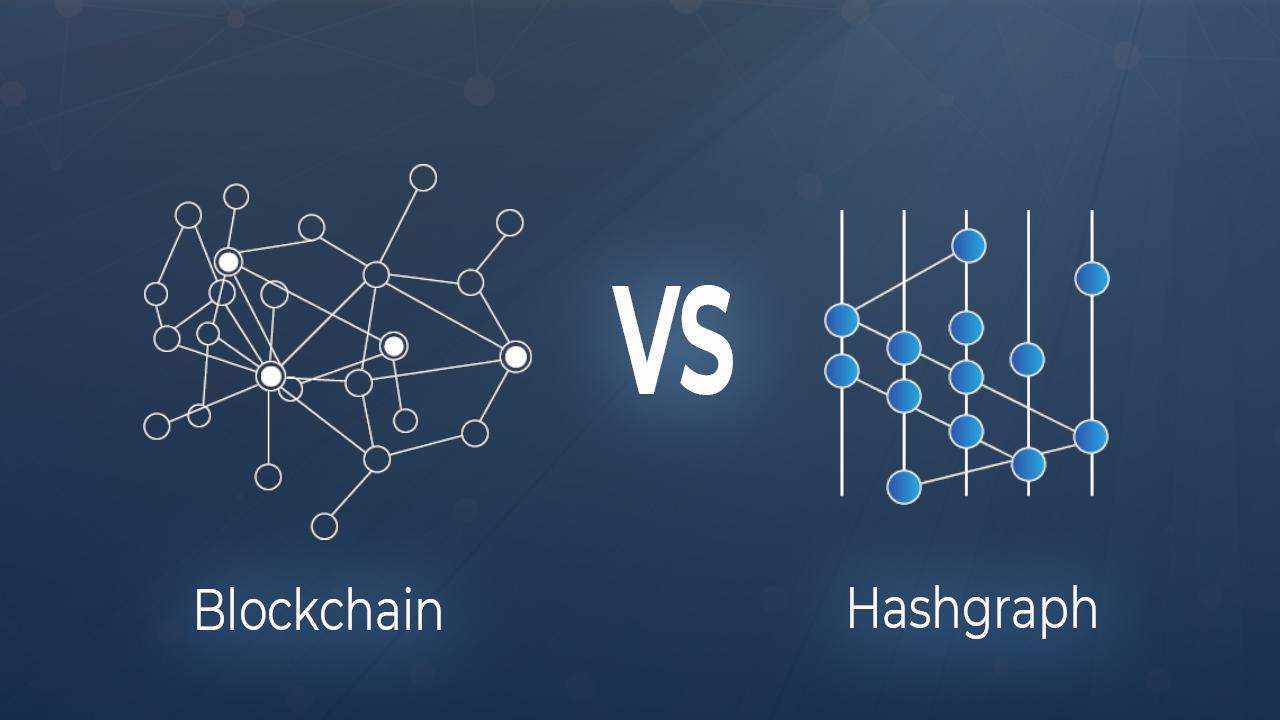 Blockchains relay information in a linear pattern (from one block to the next), whereas Hashgraph disperses information using the gossip protocol across multiple nodes simultaneously, allowing consensus to be achieved faster.

Despite these benefits, Hashgraph is often criticized because its technology is actually patented by the inventor Leemon Baird and his company.

Leemon claims that this is done in order to prevent the network from forking like Bitcoin or Ethereum and that they plan to make all the code open source as soon as version 1 of the platform is released.

The fact that the tech is under the control of a single company is a clear sign that Hashgraph is willing to compromise decentralization to achieve the full monetary gains that come with a distributed ledger technology that has higher levels of scalability and security.

How much Decentralization do you need?

Scalability is a problem that has many Blockchains (and non-Blockchains) fiercely competing to create a solution that will enable their network to reach mainstream adoption.

Entrepreneurs’ and developers creating new Dapps must ask themselves whether the Blockchain they decide to build on should prioritize decentralization and security (and must, therefore, use a layer 2 scaling solution) or prioritize scalability, and achieve the highest transactions per second even though the system is more centralized.

Ultimately, I believe the scalability trilemma represents the last hurdle to climb before Blockchain technology can finally achieve mainstream status.

Scalability enables people to spend Bitcoin, Ethereum, and other cryptocurrencies on everyday goods and services, which can be the difference between the crypto space achieving a $300billion combined market cap and a $1 Trillion one.

With thousands of developers forming communities across the world to solve this problem, I’m highly optimistic that we will scale the hurdle successfully, and do so in a number of unique ways not yet imagined.