The following is an objective review of Gifto ICO. The review is based on certain criteria, which we think are important for an ICO project to succeed. We measure a successful ICO by short term and long term ROI estimation.
The following is not a financial advice.

The company behind GIFTO is Asian innovations Group, a fast-growing social apps company with over 100M users to date (founded in 2013).
UpLive, one of AIG’s apps, is a live video streaming app with a gamified gifting solution that enables emotional interaction between broadcasters and their followers. Currently, users of UpLive are buying virtual gifts worth Millions of USD each month.
AIG wants to enable anyone to give and receive virtual gifts in an easy way. Gifto is a decentralized gifting protocol based on the Ethereum blockchain and a virtual gifts market place. Gifto will first serve UpLives’ 60,000 broadcasters to receive gifts from their millions of followers from other social media platforms such as Facebook, Instagram, YouTube, and others.
The team is strong and well experienced in the necessary fields, the advisory board is well respected in the crypto sphere, the crowd sale details are fair (low cap, low bonus to early contributors), and the first pilot of the Gifto protocol is expected to launch by the end of December 2017.

Let’s get going with our evaluation!

Asian Innovations group
Gifto is a project led by Asian Innovations Group Limited.
Asian Innovations Group, founded by Andy Tian, is a fast-growing mobile internet company creating mobile products, with over 100M users to date.
It has the following social products:
PengPeng: a gamified social chat app in Asia, with over 40 million downloads.
UpLive: a live streaming platform launched in June 2016 which has managed to attract 20M downloads, 60k broadcasters and is on track for 100M USD in revenue for 2017.
BigCat: a YouTube Content maker in South East Asia, with 150M views per month on YouTube, attracting 11 million unique viewers per month.
Superfans: a fan app that allows fans to follow their favorite stars’ social media activities, with over 10 million users since launching in 2016.

Andy Tian: Founder
CEO and founder of AIG (described above), previously the general manager of Zynga China and an early member of Google China.
Graduated from MIT with a bachelor’s degree and a masters in computer science.
Charles Thach: Chief crypto officer
Previously worked at top tier investment banks in various roles in Washington DC, Boston, Paris, New York and Hong Kong.
William H.Nguyen, Ph.D.: Chief crypto architect
Over the past 10 years, William has built much social networking, on-demand video streaming, and telecommunication applications serving tens of millions of users worldwide. He is also the author of a US patent-pending technology (filing number: 62590659 with the USPTO), allowing one to build a scalable cryptocurrency wallet (The tech behind Gifto’s future wallet).

UpLive- Live it Up

In order to understand the Gifto protocol and platform, one must understand the UpLive video streaming app.
Let’s take Olivia as an example:
Olivia is a social media influencer with ~140,000 Facebook followers. Since being on UpLive for about 10 months and broadcasting for about 40 hours/month, she received 14.7 coins (=diamonds) on UpLive which is equivalent to ~220,000 USD.
Olivia’s viewers who want to show their affection can buy and send her virtual gifts, for example, a private jet (73.5$), Lipstick (0.3$), private island (441.2$), Blue Roses (1.5$) and more.
If you send a gift to Olivia, everyone sees the gift that you have sent, and Olivia can thank you. It creates emotional interaction.
Olivia’s revenue is a percentage of the cost of the total gifts sent to her.
You can check it out yourself and join a live show of one of the top broadcasters with thousands of viewers.
Like Olivia, there are many more broadcasters with monthly revenues of tens of thousands of dollars.

Expanding UpLive’s influence: Allowing the current 60,000 UpLive broadcasters to receive gifts from all their other social media followers, in YouTube, Facebook, Instagram, and others.
The better revenue potential for all social platforms media creators: Allowing all social media producers to post a link under their content and receive Gifto tokens for each gift sent to them. Just like using PayPal, BitPay etc.
Gamified donations: Donating gifts is a lot more fun than just donating BTC, USD, etc. There is only one way to give someone $10, but endless ways to give someone gifts valued at $10.
Exponential growth potential: The creation and maintenance of a high-quality and high-demand inventory of virtual gifts is a hugely manpower-intensive task. The current team of over 300 highly skilled game artists, designers, engineers, and operational staff can only create 50 new gifts a month. The Gifto protocol will open up this market to anyone and hopefully increase its capacity and capability.

The Universal Gifting Protocol is envisioned as being a self-governing and self-sustaining ecosystem for virtual gifts to be created, curated, tracked, bought, sent and exchanged across any content platform such as YouTube, Instagram, Facebook, and UpLive.
Gifto Protocol will have the following components:
Gift – Gifto Protocol’s Virtual Smart Gift, self-executing virtual assets based on smart contracts that live on the Ethereum blockchain.
Gift Store – where a fan can buy a gift for the content creator. The Gift Store will be displayed when a fan clicks on the gifting link of a content creator and will show gifts customized by this content creator.
Gift Inventory – holds gifts for a user who can either be a fan of a content creator.
Gifto Tokens – an ERC20-standards token used to buy/redeem virtual gifts.
Gifto Wallet – a wallet to hold a user’s Gifto Tokens.
The Gifto wallet will leverage a private chain server for massive, fast transactions off-chain, and then sync back to the public chain. The wallet is simply a part of the overall fast transaction systems that are required to support a real large scale commercial deployment.
Gift Portal – a management system for gifts to be created, curated, and managed by Gifto Protocol contributors.

Gifto platform Shares revenue of each virtual gift that is bought and sent to a content creator (the following revenue mechanism will be written into each gift’s smart contract and will be transparent to all): 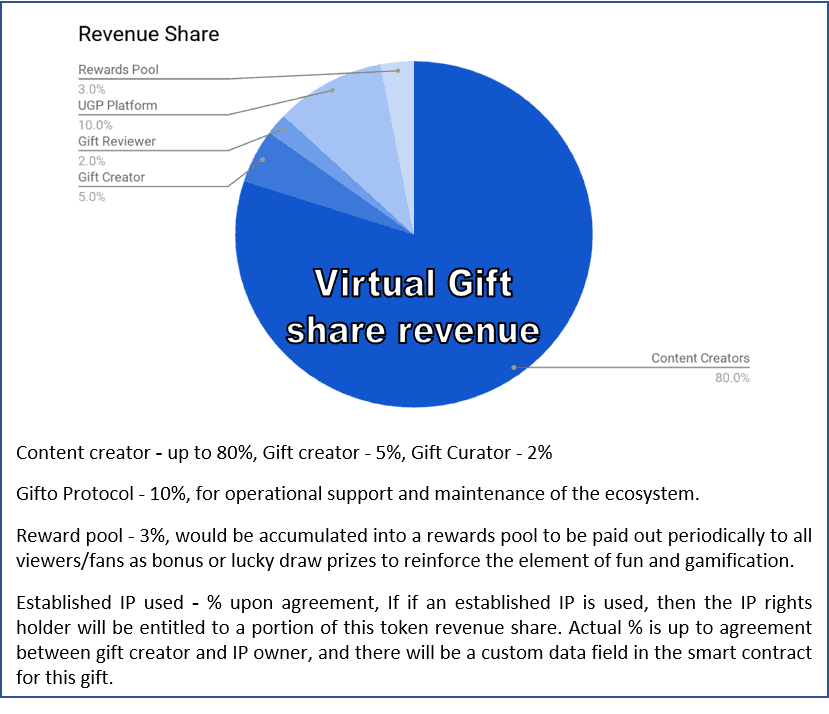 The following is one example of how we might use the GIFTO protocol in the future.
Let’s say that we have decided to end our next live market update with a gamified poll.
At the end of our broadcast, each viewer will send a gift coin (ETH/BTC/LTC/ZCASH/ENG/other) that he thinks will top all other coins until the next market update.
To do so, you press on a link under the video, choose your gift resembling the coin you believe in and send it to our broadcaster (You will have to charge your GIFTO balance in advance).
Each gift is an asset that will enter cryptopotato’s inventory immediately and could be calculated easily.
At the last 10-sec time frame, everyone will see ETH/BTC/LTC/ZCASH coins flying to the screen and a live score bar of all the coins sent.
Not only will it make our show more playful and create a better interaction with you, our community. We will also receive 80% of the price of each gift in GIFTO tokens.

The Gifto token will be the only way to buy virtual gifts on the Gifto platform, Gifto tokens will gradually replace Diamonds on UpLive platform (The current virtual coin to buy gifts on UpLive).

Team and Advisory board: In 4 years the AIG startup managed to attract 100M+ users and ~100M USD revenue in 2017. The team has vast experience in the necessary fields (gamifying, social media, blockchain tech). The advisory board is well respected in the crypto community.

Product feasibility: The idea is already successful on the UpLive platform- virtual gifts are bought for millions of dollars each month. The Gifto platform will expand initially via UpLive’s 60,000 broadcasters that have millions of followers on other social platforms (Facebook/Instagram/YouTube etc).

Sale mechanism: The hard cap and the token allocation is fair (30M USD/30% tokens distributed). The cheapest token that will be sold during the private and public sale is with only a 10% discount. • The cap was initially 100,000 ETH. When the ETH price started to rise, the team decided to peg the hard cap to the USD. This decision is much appreciated.

Product development: By the end of December 2017, the first pilot of the Gifto protocol on external content platforms will be live on a private blockchain. The Gifto team assigned 5,000 broadcasters for that pilot (all have millions of followers on external content platforms). Binance partnership Gifto was selected by Binance to be the first ICO on their launchpad platform. Binance is a crypto-asset exchange with a daily volume of ~500M USD.

Token allocation: Advisory/investors/contributors/company allocation is 40% of all tokens which will create an uneven distribution and may allow easy price manipulation in the future (there is a 2-year lockup for the team and 6 months lockup for the advisory board).

Community size: To date, there are ~2,900 members on Gifto’s telegram group. It is quite small compared to other recent hyped projects (Quantstamp – 10,000+)

Key for the evaluation: IF = Impact Factor WA = Weighted Average

Team & Advisory board: Broad experience and knowledge in necessary fields. Score 9.5 IF 5 WA 1.72

Token use: virtual gifts will be bought only with Gifto tokens. Strong token demand/platform success correlation. Score 9.5 IF 3 WA 1.29

Backend and Technology: A good use case for Ethereum smart contracts. High-end Gifto wallet to allow a scalable on/off-chain solution. Score 8.5 IF 2 WA 0.72 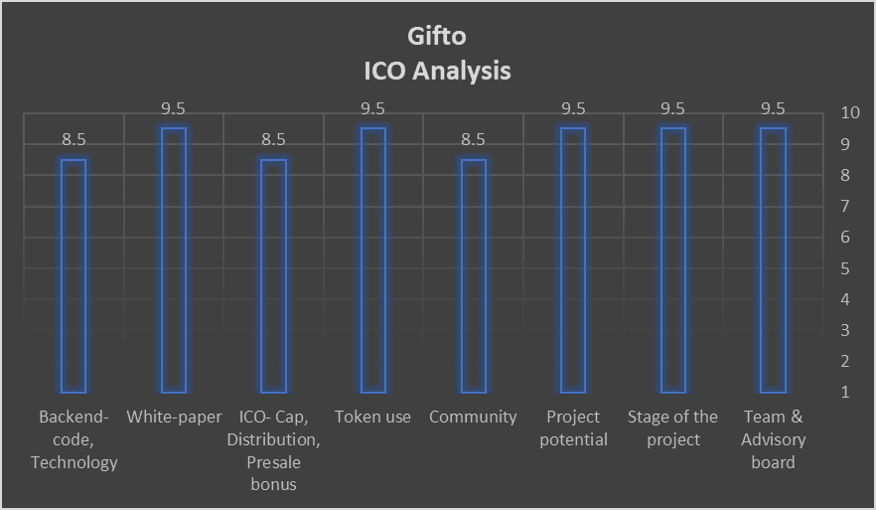