By now many people are aware that Crypto markets can be influenced by traditional asset classes like Stocks, currencies, gold, and bonds. Ever since the 2008 financial crisis, these traditional assets have been subject to (and benefit from) a monetary policy known as ‘Quantitative Easing’ or QE.

Quantitative Easing is simply the introduction of new money into the money supply by a central bank. This policy lowers interest rates and increases the money supply by flooding financial institutions with capital to promote more lending and liquidity.

QE was implanted after the 2008 financial crisis to prevent the banking system from a disaster and to boost the economy by creating an influx of new capital. Many have credited the stock markets longest bull run to this QE policy.

A decade later, QE is now coming to an end, which means a rise in interest rates and a slow down of new capital that could lead to a bear market cycle in traditional assets. On the positive side, it could also lead to deflation of currencies, which means fiat money is worth more. However, this depends on how and when the Federal Reserve reverses QE.

We’ve already discussed how the rise in interest rates could be affecting Bitcoins price.  Former L/S Equities Portfolio Manager Travis King recently shared the following chart showing that 90% of asset classes have posted negative returns this year, likely the result of QE coming to an end. So why does this spells positive news for Bitcoin and the crypto markets in general? 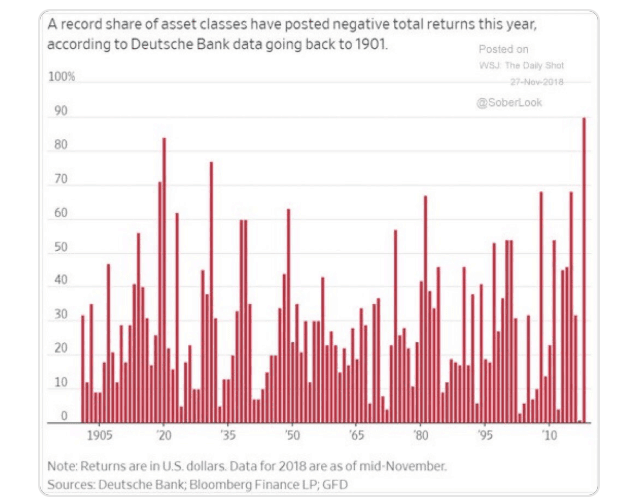 Bitcoin Could Benefit From The Situation

Bitcoin may become more valuable due to the instability created by the end of QE, which will make people feel as though they can’t rely on traditional markets. Instead, they’d rather exercise as much control over their own money as possible by placing it in Bitcoin.

Ultimately, this would make Bitcoin the only asset class to perform well with rising interest rates caused by the ending of QE, which would also be clear indication of the long-term superiority of Bitcoin over traditional assets.