In an industry like this, where cryptocurrency prices are highly volatile and unpredictable, putting all eggs in one basket could be quite risky. Many got to know this the hard way, while some learned from the experiences of others.

A recent Twitter poll revealed that an increased number of crypto traders and investors are now expanding their portfolios to include more than one digital currency, including Bitcoin.

46.7% of Traders Invest In BTC and 5 Other Altcoins

Popular cryptocurrency trader Josh Rager, took it to Twitter to ask people what digital assets they invest in.

As per the poll, almost 47 percent of traders have their money in Bitcoin and less than five other cryptocurrencies, while 16.6% of the participants have investments in Bitcoin and at least six altcoins.

Interestingly, as many as 23% of traders are in the bandwagon of being “All in on Bitcoin.” These participants said they only invest in BTC with no interest in other coins in the market. 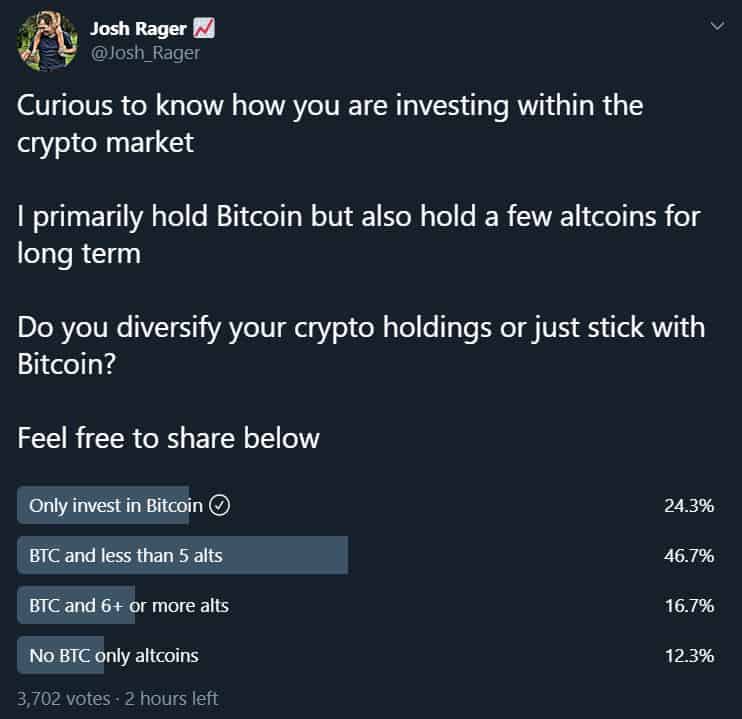 Lastly, 12.3% of the traders who participated in the poll claimed they are 100% altcoiners with no investments in Bitcoin, despite the increased volatility associated with alternative cryptocurrencies. Banking fully on altcoins, however, comes with its own perks as traders can make huge profits within a short period like in the case of Everex (EVX), an altcoin that gained a 300% profit in just a few days. Of course, it’s also worth noting that a lot of the altcoins are still miles away from where they were prior to the bear market in 2018.

While it’s clear that more people are now diversifying their portfolio to accommodate more cryptocurrencies, a previous Twitter poll involving more than 10,000 participants, revealed that most crypto traders dedicate a larger percentage of their investments to altcoins rather than Bitcoin, Cryptopotato reported in 2019.

Another interesting poll held in late 2019, which aimed to unravel the selling sentiment in the crypto community, further revealed that 23% of investors would never sell the majority of their Bitcoin stack, not even if the value hit $1,000,000.