A relatively quiet week passed over the crypto markets, which continues its dive into the unknown. The realizations trend continues, and it seems that the market is beginning to internalize the regulatory decrees and keeps some fiat on the side to pay the taxes. Also, in the ICOS world, it seems that regulation is doing its job and that the trend of public funding has stopped. At the time of writing, the Crypto market had lost around $40 billion when bitcoin lost an average of $500 and even visited the five thousand prefix.

And like the market veterans know from experience that when the bitcoin price is going down, the alternative coins suffer to a greater amount and their decrease reinforces the dominance of Bitcoin to 42%. So those who needed a reminder that Bitcoin leads the crypto market received it in the last wave of declines, we hope it did not hurt.

In conclusion, the market continues the correction from the beginning of the year, and traders signal risks and a lot of uncertainty that takes us from floor to floor on the way to the long-awaited support.

Amsterdam Schiphol Airport Installs Europe’s First Airport Bitcoin ATM. Amsterdam Airport Schiphol has left its mark in history as the first European airport to install a Bitcoin ATM which is now available for use. The machines, however, are currently on a six months trial period to determine the demand for such service. Crypto enthusiasts using Schiphol airlines will benefit from using the ATM because it will allow them to easily convert their euros to cryptocurrencies such as Bitcoin and Ethereum.

‘Evolve & Adapt’: Goldman Sachs May Trade Cryptocurrencies, Not Just Futures. The Goldman Sachs Group has become very bullish about cryptocurrencies and would soon launch a full-scale crypto trading operation in order to serve the growing demand of its clients. David Solomon, Goldman Sachs COO during an interview with Bloomberg, revealed that the firm is currently having internal board meetings on how to provide crypto services to investors. In the past, the firm was reluctant to become an active player in the crypto industry, but that is about to change.

Thanks for subscribing, you will get your first report in the next hours!

Third-party report says all tether USDT fully backed by U.S. dollar reserves. A recent report from Freeh Sporkin Sullivan, LLP (FSS) claims that the USD reserves sufficiently back all circulating Tether (USDT) as of June 1. Tether is a stablecoin that was created to convert cash into digital currency and to peg the value to the price of fiat like the US dollar, euro, etc. A review of Tether’s bank account documentation reveals that Tether’s account balance exceeds the total value of circulating Tether.

Mt. Gox ‘Bitcoin Whale’ Trustee Won’t Sell Any More BTC. After almost four years of losing their funds, creditors to the Mt. Gox Crypto exchange are one step closer to recover the funds they lost in a high profile hack attack in 2014. The Tokyo District Court has ordered the company to suspend the criminal bankruptcy and begin the civil rehabilitation proceedings, which could come next year. The good news is that Mt. Gox Trustee, Nobuaki Kobayashi, won’t sell more BTC until creditors receive reimbursement in starting from early next year.

Bitconnect Director’s Wife Still Missing: Police Now Suspecting Murder. According to local reports, Madeline Bigatton, wife of John Bigatton, and a mother of 2 went missing on March 25th from her family house located in Sydney Australia. It has been three months since she was declared missing and there has been no information on her whereabouts. Bigatton is the director of the popular cryptocurrency Ponzi scheme ‘Bitconnect’ that affected many of unsuspecting investors.

Bitmain Nears 51% of Bitcoin’s Network Hashrate. Beijing based ASICS manufacturer and cryptocurrency miner ‘Bitmain’ has successfully gained 42 percent of hashrate found on the Bitcoin network for the last seven days. The 42 percent was found by BTC.com and AntPool comprising of 27.2 percent and 14.6 percent respectively. Antpool and BTC.com are both owned by Bitmain, but the company claims BTC.com has its own independent operations.

Bitcoin ETFs Could Help BTC Price Reach 35,000 Dollars. Despite the recent Bitcoin bear market, a  group of cryptocurrency researchers has claimed that Bitcoin ETFs, once they enter the market, could boost the price of Bitcoin to around $35,000 and it is possible for this to happen before the end of 2018. These experts believe that once things are in place,  institutional investors readily enter into the cryptocurrency market which will spur things.

Wolf of Wall Street Predicts the End of Bitcoin is Near. Last week, Bitcoin hit a new 2018 low which kept many investors in FUD. While some investors believe that the world’s largest cryptocurrency would recovery from the slump, others think it would dip even further. A popular figure, Jordan Belfort, known as the Wolf of Wall Street, shared on Saturday last week, a Facebook video pointed out that the Bitcoin drop is only the beginning and that the decline would continue until the cryptocurrency finally crashes.  According to him, Bitcoin’s price drop is “just the beginning of the end,” and many HODlers will be affected.

The downward trend in the graph is obvious and the fragile support is based on the low prices seen in February and April of this year. Right now, it seems like we’ve reached the floor from where we can jump back to the $9,000 mark. However, if the floor collapses, the free fall will have to look for another spare parachute. In any case, the market needs time to balance and in the meantime leaves the possibility of quick profit in the short term and at high risk. 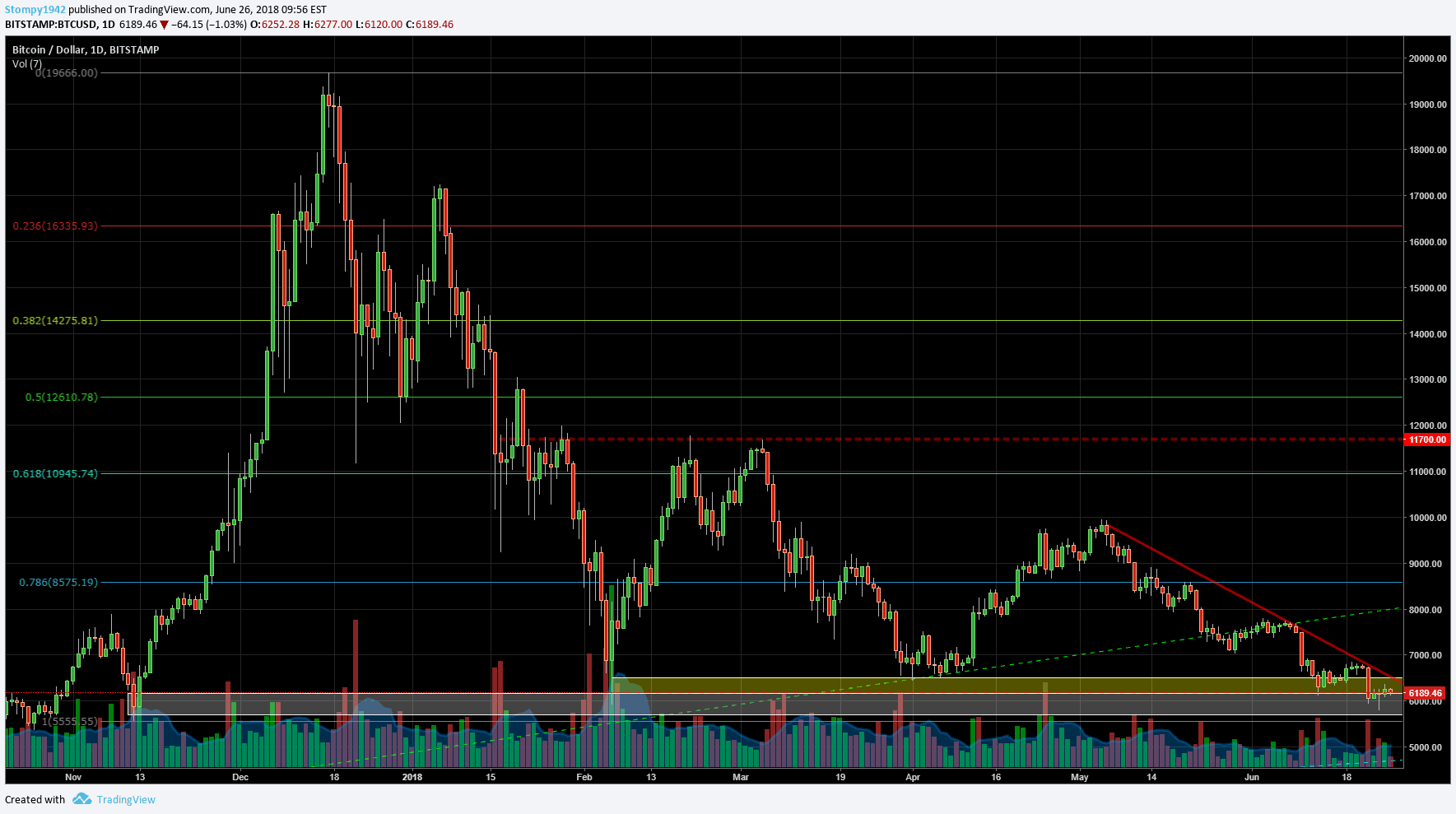 Against the dollar the support levels around $450 are fragile and we have already seen declines to the $420 area. It certainly makes sense that we will soon be visiting $400 to test the support. 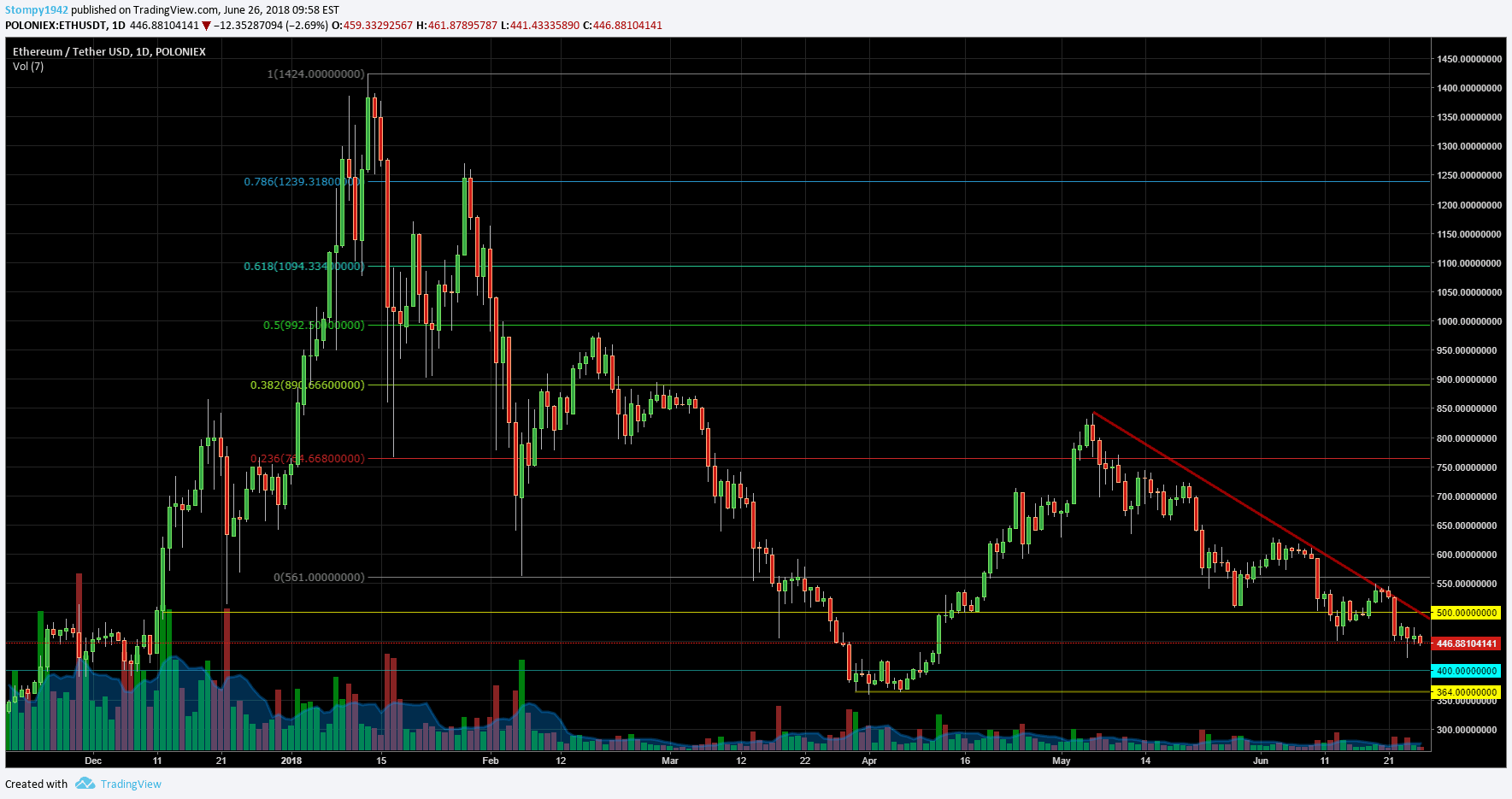 Against the Bitcoin support around 0.07 BTC, is being tested in this range. Its traded around 0.072 BTC with resistance at -0.08 BTC. 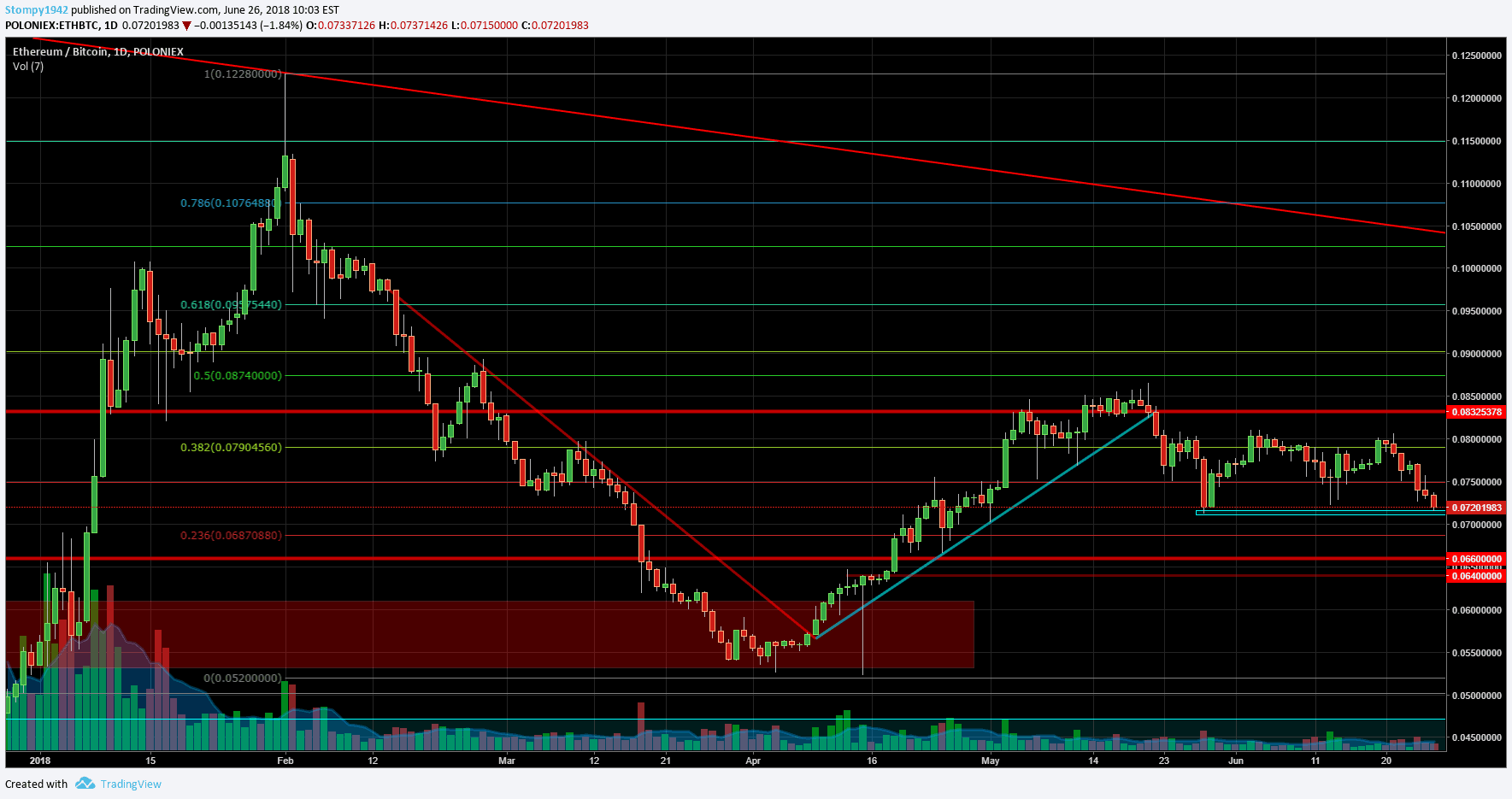 Like the rest of the market, Bitcoin Cash is also on a downward trend and seems to be returning to the levels of support we saw in April around $600-700. 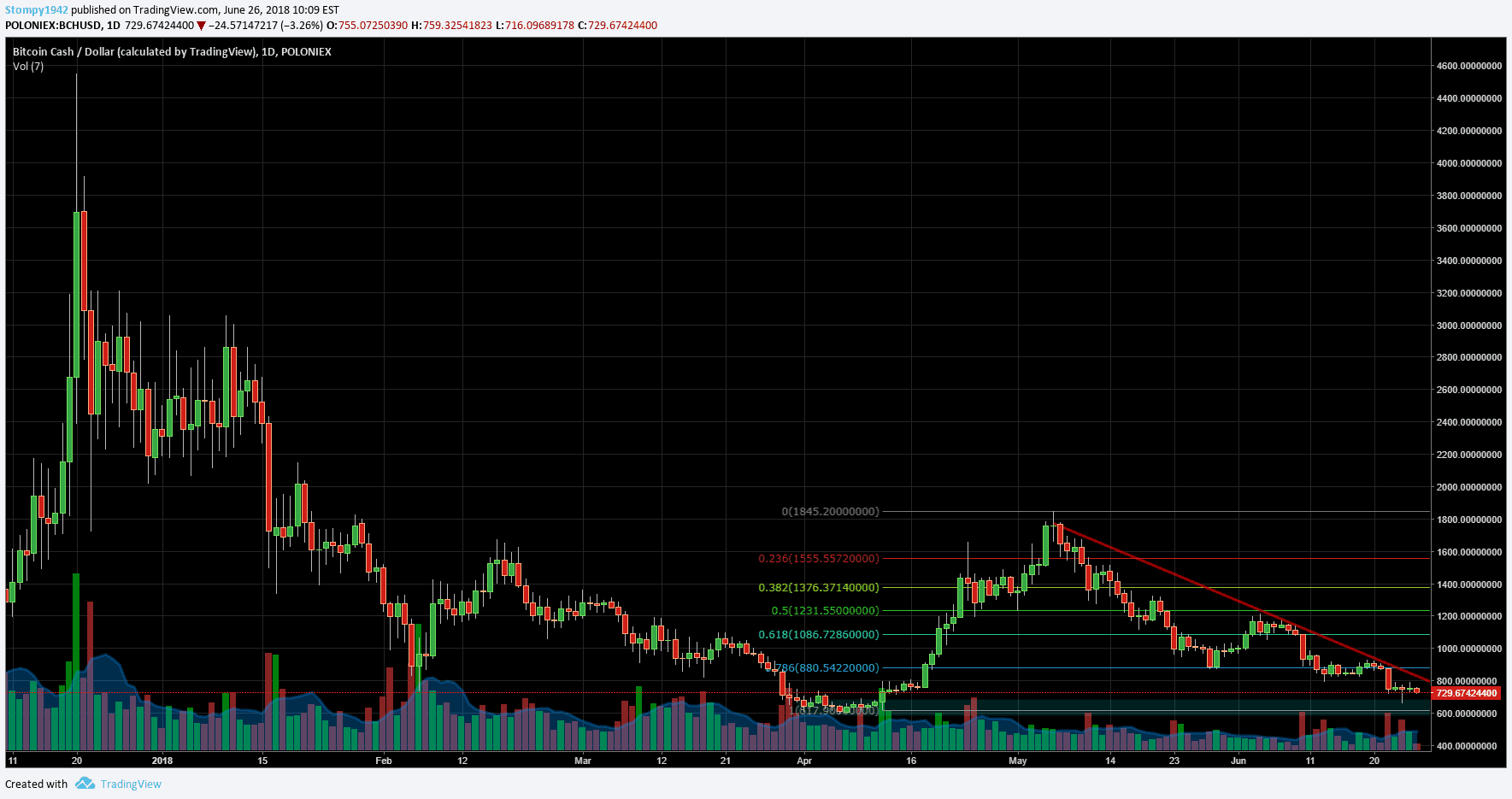 Against Bitcoin, it traded around 0.112 BTC and the support is also hiding in these resistance areas at 0.13 BTC which currently seems difficult to achieve. 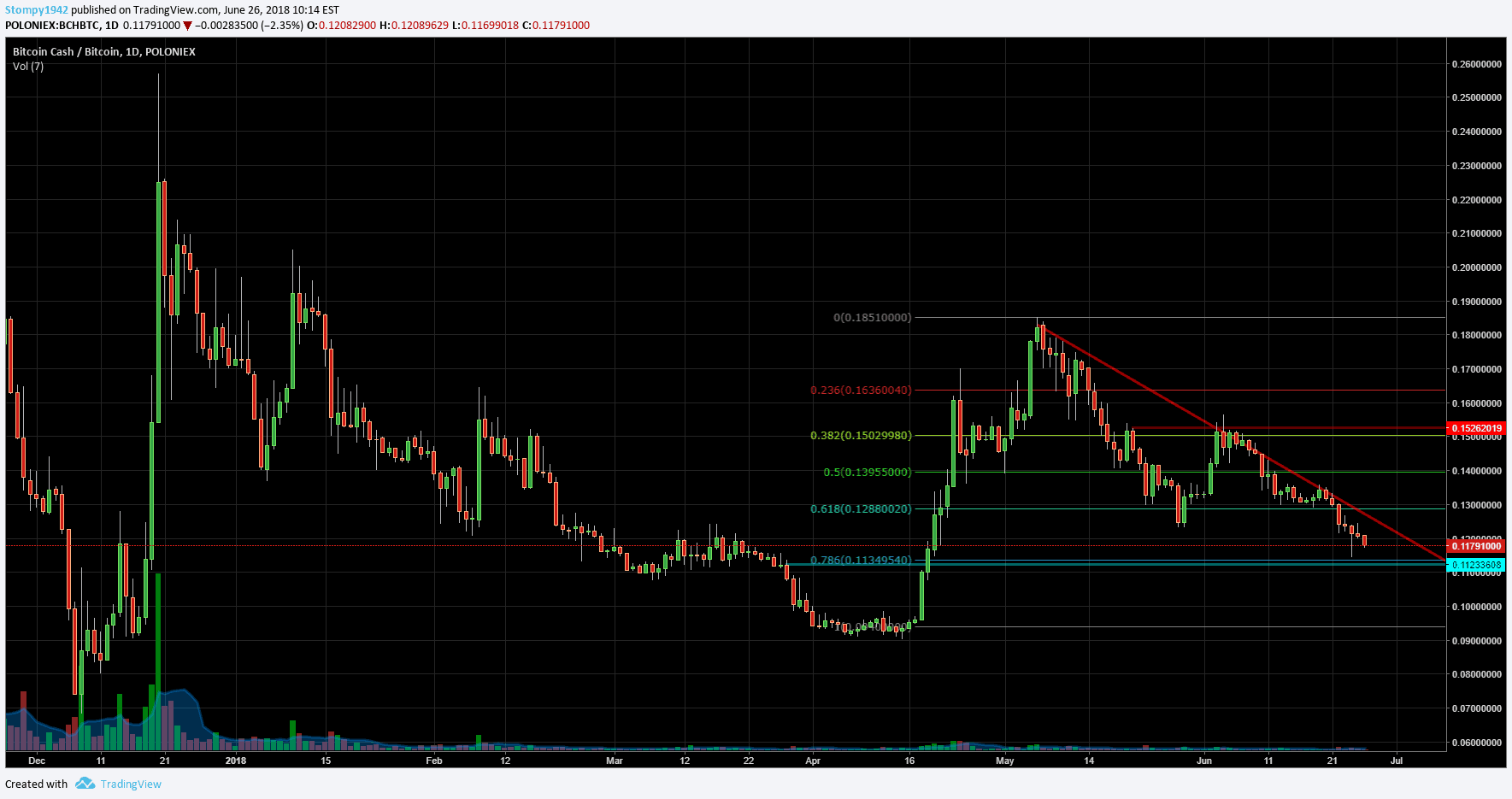 Against the dollar, the exchange rate is at a low point and has even fallen from the levels we saw in November 2017. Are we in the Deep? It traded around $233 with support around $230 and also the resistance is at $280.

Against Bitcoin after a period of volatility during 2017, the rate is in a slow and steady decline which is based on the low support levels around 0.034 BTC. 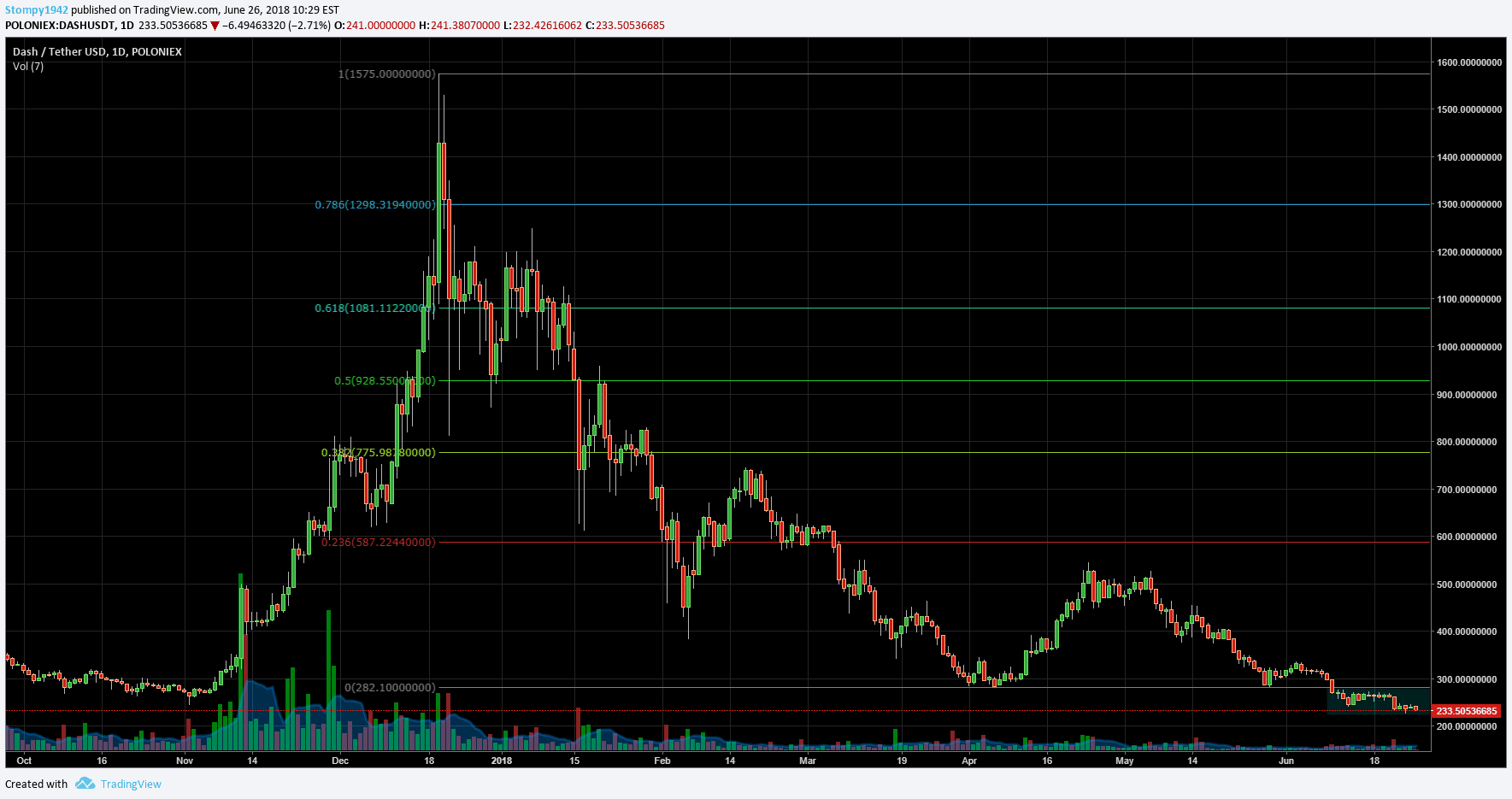 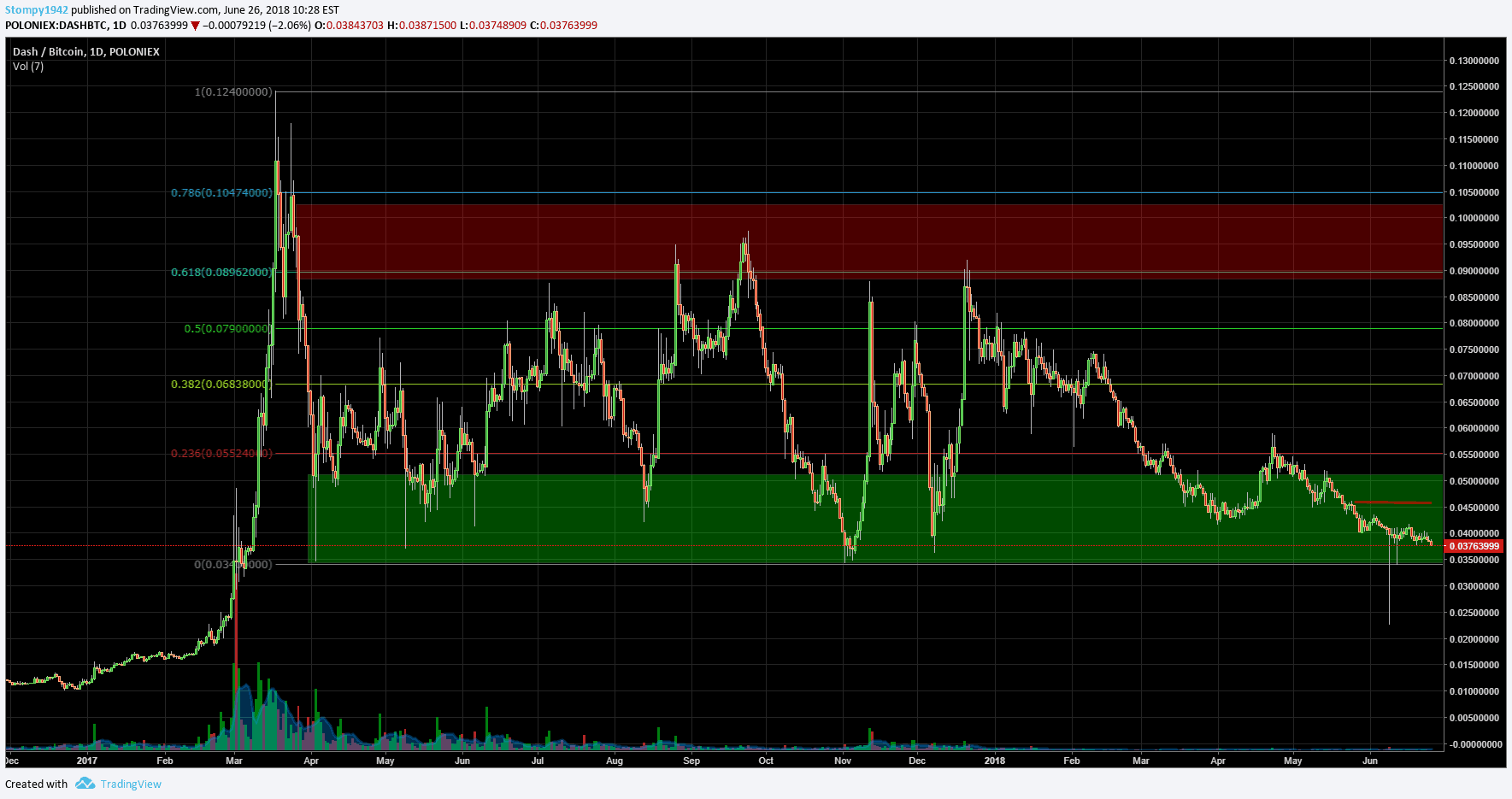 Against the dollar, like Dash, Fibonacci levels were broken, and maybe here we went to Deep around $110, where the support is also sitting. Traded around $129 and in this resistance range its at $150. 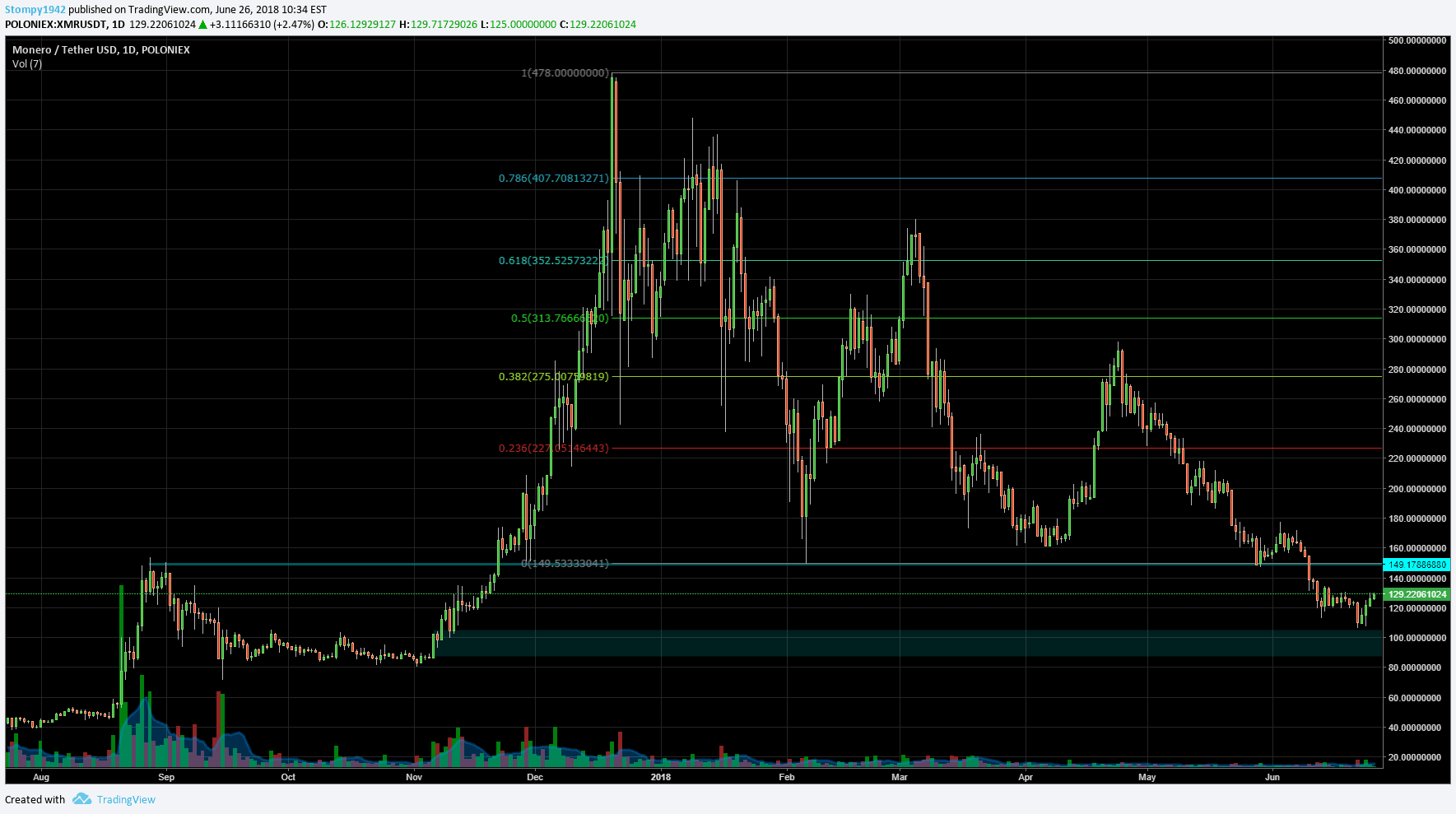 Against Bitcoin, the story is different from the beginning of 2017, with corrections and floors higher than their predecessors. Despite the corrections on the way, Monero seems to be generating a lot of interest. It traded around 0.02 BTC with resistance around 0.022 BTC and support at 0.018 BTC which is also the floor in this range. 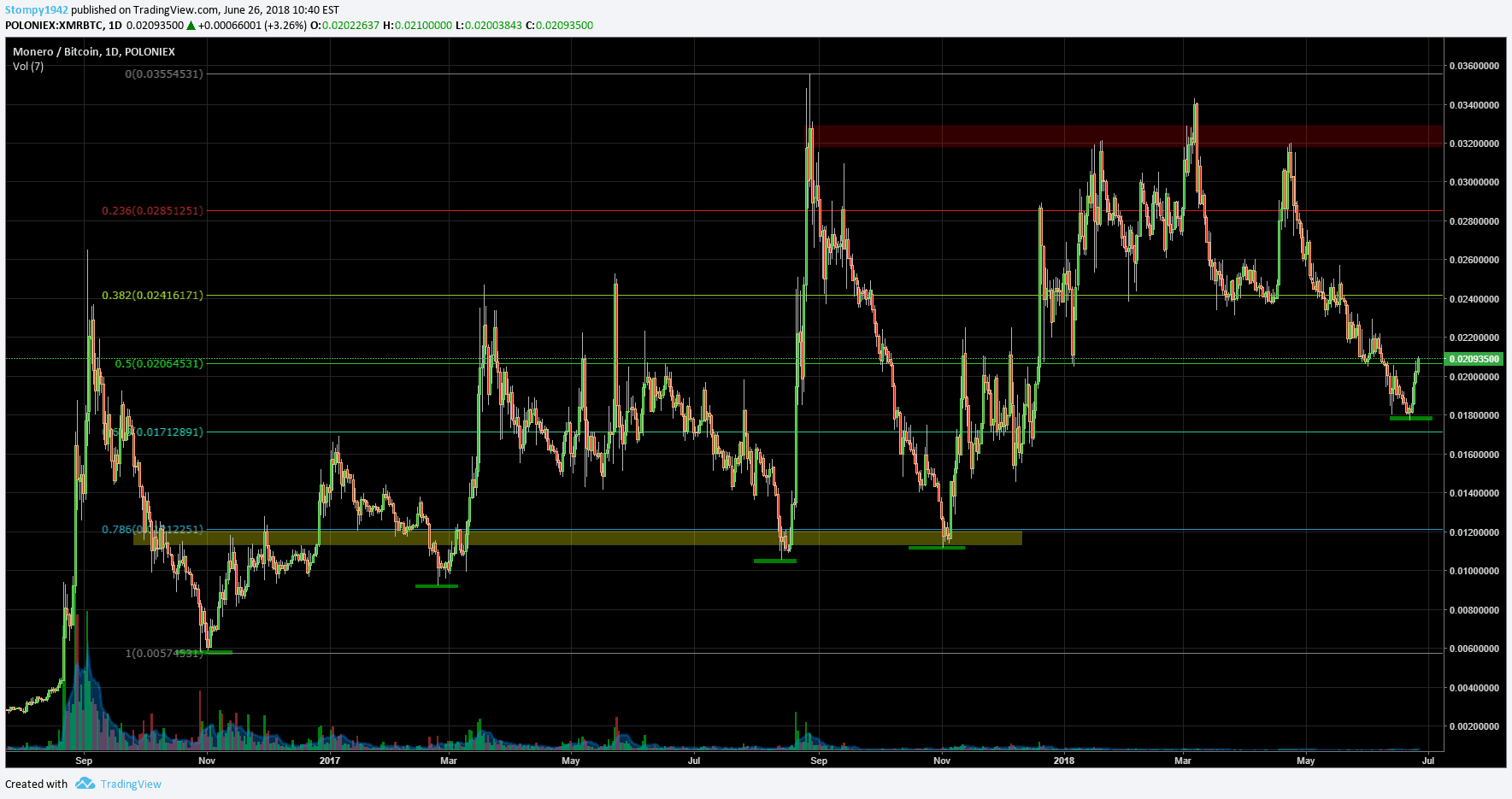