Kraken is one of the first US-based exchanges. It was launched in September 2013, and its margin trading option was delivered in late December 2018. Margin trading allows users to leverage their positions backed by funds that users don’t really possess.

The benefit of this type of trading approach is that it can substantially increase profits and risk a smaller amount of funds. However, it’s also worth noting that it can quickly amplify the losses too.

Leveraged trading allows the user to open a position which is leveraged than their current balance. The funds used beyond what the user currently has in their account are advanced from Kraken.

It’s important to keep in mind that margin trading is considered high-risk trading, heavy losses can be a result if the trade doesn’t go as expected. Therefore, it’s very important to understand the risks of this type of trading and to seriously proceed with caution.

How to Trade on Kraken Margin Trading

To margin trade on Kraken, the user has to go through various order types depending on where they think the market will go. The user can open long or short positions, and they can close them by creating opposite orders or using the settling command.

What Coins Can be Traded on Kraken Margin and What’s the Maximum Leverage?

One thing that has to be carefully clarified is which cryptocurrencies Kraken allows for margin trading, and the leverage levels users will be able to work with.

Kraken has different leverage levels depending on the cryptocurrency the user decides to trade with. Hence, the allowed leverage differs according to the base currency and the quoted currency.

The following shows all the cryptocurrencies currently available for margin trading as well as the leverage levels allowed for each one: 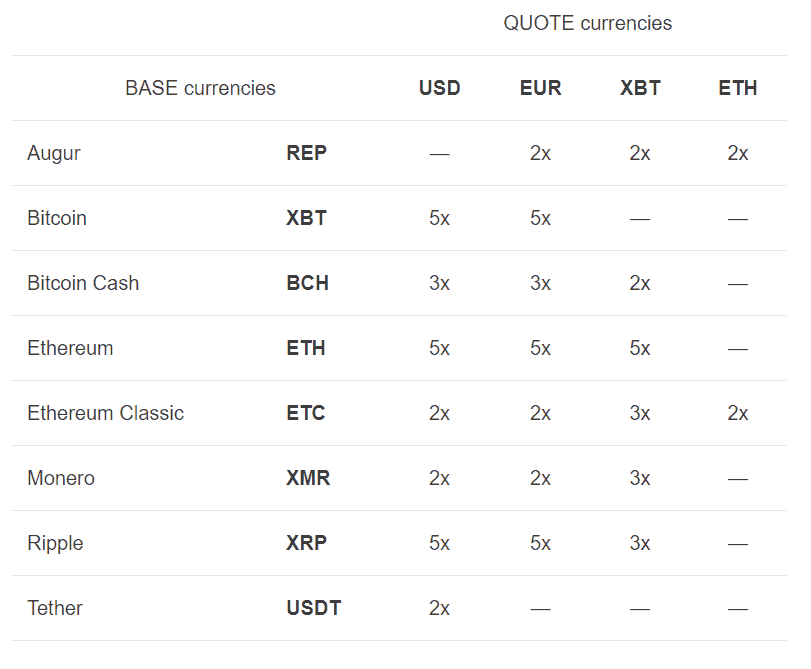 Update October 2019: Kraken had extended its leverage for up to 50x for eligible traders on Kraken futures.

How to open a margin position on Kraken

Opening a position happens when the user receives advanced funds (the margin) which will help them execute a leveraged trade.

In general, two types of positions can be opened, based on whether the user wants to go long or go short.

To open a long position for, let’s say ETH/EUR, the Kraken exchange will advance EUR to purchase ETH.

On the other hand, if the user wants to open a short position, they will advance ETH so the user can sell it for EUR.

Once logged into the account, the user has to go to the “New Order” tab and then select “Intermediate” to enable margin trading.

Once there, the following screen will be displayed. 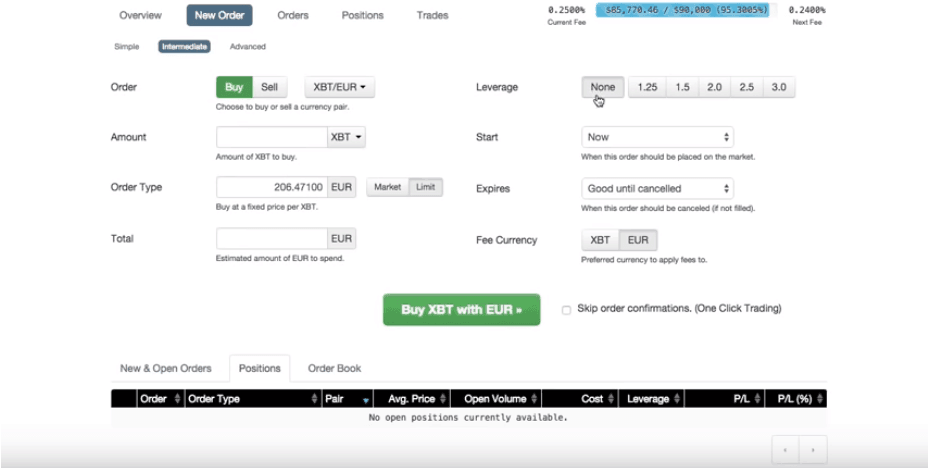 The user will be able to either buy or sell using the given leverage on the right, as shown on the above screenshot. For example, if the user decides to use a leverage amount of 3, which is 3:1, this will triple their buying power.

If the user wants to go long, they’d have to set up a buy order, as in the above instructions.

Next, the user has to set up the Order Type. If they decide to go with the market, they need to select “market” from the two types. However, if they want to execute the trade as the price reaches a certain limit, they’d have to choose “limit”.

How to close a position

As we mentioned previously, when the users are using leveraged margin positions, trades are executed with an advance which is financed by Kraken.

In the above screenshot, there is an open long position for Bitcoin. It shows that the order type is “buy/market” meaning the position is long and picks the best available market order instead of aiming for a certain price limit on the order book.

To close that position, the user would have to create the opposite trade. 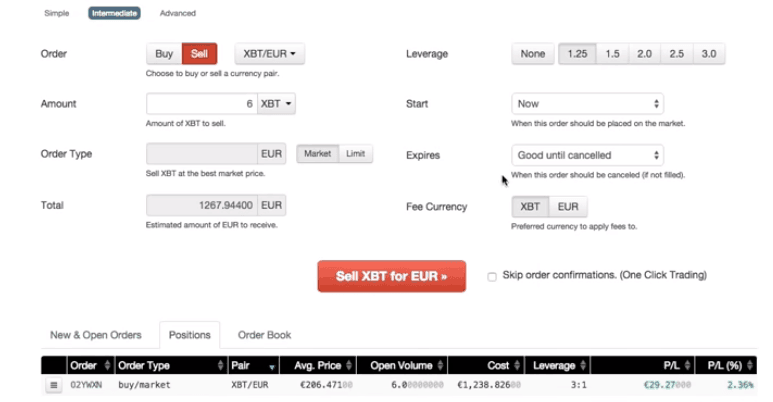 On this screen, the user has to select the “Sell” option because the position that has to be closed is a “Buy”. They would also have to choose any type of leverage because otherwise their funds are sold straight in the best available market price.

After selecting leverage, all the user has to do is click on the Sell XBT for EUR button and the position will be closed, adding or discounting their balance with whatever profit or losses were made with that position.

What is Settling a Position?

As explained, margin trading is executed with advances from Kraken. One way to close positions is to execute an opposite trade as explained previously.

However, the second way is if the trader returns the advanced funds directly from his account without involving a trade. That’s called a position settlement.

To settle a long position, for example, here’s what has to be done.

The user needs to select the advanced tab on the top menu to create a Buy Settle Position order.

After that, the user selects the amount they want to settle and any level of leverage. The order type needs to be “Settle Position”. That’s pretty much all there is to it.

The amount of cryptocurrency settled is going to be bought using the specified currency from the user’s account at the price they opened the position with.

How much are the fees for Kraken margin trading?

There are two types of fees that the user has to be aware of when it comes to margin trading on Kraken. These are the ‘opening fees’ for opening a position and the ‘rollover fees’ for maintaining a position.

Both of those vary depending on the base and the quote currency. The opening fee is between 0.01% and 0.02%.

The rollover fee, on the other hand, is charged on a 4-hour interval and, once again, is different according to the cryptocurrency trading pair the user has selected. It varies between 0.01% and 0.02% per four hours.

Margin trading on Kraken can be beneficial and could enable the user to amplify their gains if the right trades are executed.  The platform does offer quite a few benefits, but there are also some negatives that have to be factored in.