Last week, Starbucks announced that it would be working with Microsoft, BCG and the International exchange to form a new company called Bakkt, which is described as a “A Global Regulated Ecosystem for Digital Assets”.

Major news outlets broke the story as confirmation that Starbucks would be finally accepting Bitcoin in their stores, a bullish signal for the crypto market.

Unfortunately, the reality was much less exciting, as it turned out that Bakkt would “only let users trade and convert Bitcoin into fiat currencies”, which they would use to pay for items at Starbucks.

In other words, Starbucks role in the venture is simply to help Bitcoin holders easily convert their money to fiat.

“Customers will not be able to pay for Frappuccino’s with bitcoin” said a spokesperson at Starbucks.

Like most other major institutions, Starbucks is still weary of embracing Bitcoin due to the many regulatory concerns.  Yet as Bitcoins price currently sits around $7,000, we ask what the potential impact to its price would be if Starbucks actually accepted the cryptocurrency as a form of payment. 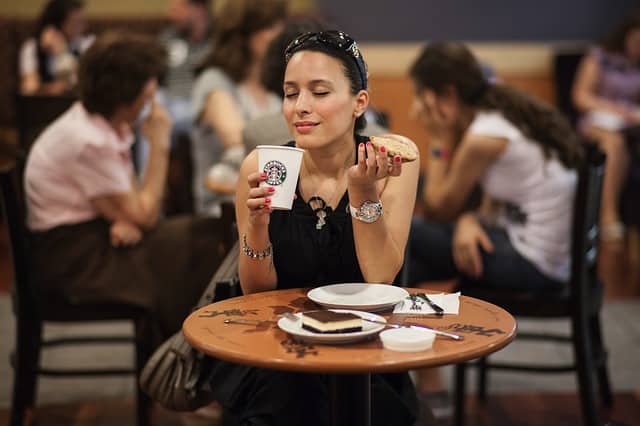 Since the beginning of 2018, we’ve heard from multiple “experts” who claim that Bitcoin will reach $20,000, $50,000 or even $100,000 by the end other year.  It’s clear by now that most of these people are simply trying to put their name out there for attention. The more outlandish the prediction, the more press coverage they get (and frankly, it doesn’t take much to be considered as an ‘expert’ on the internet).

Today the vast majority of Bitcoin holders are only holding the coin as a speculative investment. They either bought before 2017 and made a lot of money, or bought in December and have mostly lost money. Either way, their primary goal is to see the price go up so they can sell at a profit.

If Bitcoins price ever goes up to $19,000 again, it will likely fall back down because nobody will want to buy more at those prices (especially not after what happened in December last year, when the price dropped from $19,000 to $6,000 within 2 months).  The $20,000 price level is going to meet massive resistance from sellers unless we see a wave of new buyers enter the market that have a different motive for owning Bitcoin.

This new buyer must be more interested in using Bitcoin to purchase something else that they perceive to be of higher value that the cryptocurrency itself (a cup of coffee, a book, an IPhone, etc). Only in this case would the customer not care what the current price of bitcoin is, and will go ahead and purchase it in order to make a transaction for an item they perceive to be of higher value.

Such a scenario would only occur if Bitcoin were the preferred currency to buy the valuable item, and if purchasing Bitcoin became faster and more efficient than ever.

Starbucks may not be accepting Bitcoin at this time, but their interest in making it easier for Bitcoin holders to convert is still a positive step in the right direction.

Ultimately, a coin that is held by more speculators than spenders will never experiencing a sustainable price hike, as traders will always be looking to pass it off to the next person who is willing to buy it at a high price because they think it will go higher. As we’ve seen countless times, there reaches a point where there aren’t enough speculators willing to buy at a high price, which leads to a dramatic sell off, resulting in those who bought at the top losing the most money. Once the dust settles from the crash, and the coin is considered ‘undervalued’, and the speculative cycle repeats itself.

If Bitcoin ever hopes to break this cycle and reach $20,000 or even $50,000, we must see millions of new buyers enter the market (via Starbucks or other major corporations) who are less interested in price and more interested in items that they can purchase with Bitcoin, regardless of its price or profit potential.