The next Bitcoin halving that will take place during May 2020 is almost here. The crypto community is excited and already started speculating about its impact on the price of Bitcoin, miners, and so forth.

But to understand why this event is so crucial for the overall performance of the world’s largest cryptocurrency, there are quite a few things to be aware of, especially when it comes to Bitcoin mining and the way the network functions.

In one sentence, what is Bitcoin halving?

The Bitcoin halving is a pre-programmed event occurring every four years (on average) that cuts in half the miners’ reward per block, at which new Bitcoins are created.

How many Bitcoins are produced daily, as of now? What about after the halving?

The Bitcoin’s network blockchain is the heart of the coin. A new block is closed and being added to the blockchain every 10 minutes on average. 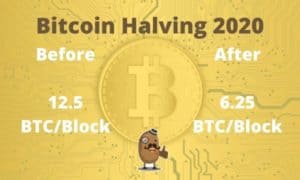 As of now, the miners’ reward per block is 12.5 Bitcoins, or 1,800 BTC daily. After the halving, the block reward will trim down to 6.25 Bitcoins, or 900 BTC daily estimation based on 10 minutes average processing time per block. For more information about the mining process, refer to our Bitcoin For Beginners guide.

Is it the first halving? How many halving events were there so far?

The first Bitcoin block, which is nicknamed the Genesis block, was mined on January 3rd, 2009. Because block halving events occur every four years on average, there were two halving events: The first took place on November 28, 2012. The second one happened on July 9, 2016. 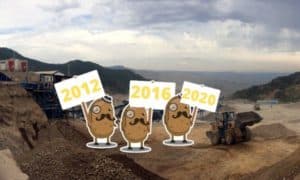 When exactly will the 2020 halving take place?

The next halving, the one of 2020, is scheduled to take place towards the middle of May. The exact date and time depend on the block processing speed. The halving will take place on block number 630,000. You can check what block we are on here, on the block explorer.

Will there be Bitcoin halving events forever?

No. The halving slows down the process of Bitcoin production, but since there will only be 21 million Bitcoins – eventually, it will end someday. The estimated year of the last Bitcoin to be mined is 2140. Consequently, halvings will not be necessary after that.

Why is everyone excited about the Bitcoin halving? Will Bitcoin price go up or down?

It’s a significant deflation event. While no asset or FIAT currency has a built-in deflation mechanism in its protocol, Bitcoin is unique, and the halving makes Bitcoin even rarer. The halving will decrease the pre-programmed inflation rate from 3.65% to approximately 1.8%.

The crypto community is excited because of a possible bullish price effect. After the two halving events of 2012 and 2016, Bitcoin’s price soared in the following year. This causes mass speculation that history will repeat itself. Yet, there is no guarantee, as past performance is not indicative of future results. 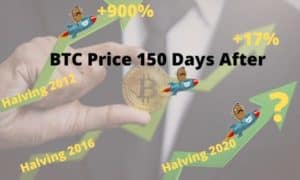 Is the Bitcoin halving bad for miners? Is there a situation where they stop mining?

It depends. Miners will receive less new Bitcoins for their efforts but BTC’s price will have the last word. If the price is low – or significantly lower than the production cost for the miners – some miners may not be able to cover their costs and shut down their mining operations.

This will be a classic example of supply and demand: as miners step out, the ones that will still operate will have less competition and hence, fewer expenses and more reward.

Adding to the above, there might be a rare scenario where the situation can worsen into miners’ war. If that happens, the market could become more centralized as only giant mining companies such as Bitmain would operate.

What will happen to Bitcoin miners when the last Bitcoin has been mined?

Bitcoin miners, besides competing for Block rewards, also profit from transaction fees. As the network grows and becomes more widely accepted, it is entirely possible that by 2140 (estimated), transaction fees could be profitable enough for miners to continue their work indefinitely. This is precisely Satoshi Nakamoto’s vision:

“Once a predetermined number of coins have entered circulation, the incentive can transition entirely to transaction fees and be completely inflation free.”

For Further Reading: What is Bitcoin Mining and How Does It Work?

Even though they are seemingly distinct, you can identify similarities between Bitcoin mining and precious mining metals like gold, for instance. Both of those activities are carried out to earn a reward.

Furthermore, both processes are energy-intensive. In gold mining, it’s a matter of physical use of energy through machines and workforce to excavate the gold from the ground. However, with Bitcoin mining, the energy is mostly electricity, which is used to solve complicated and difficult computational puzzles.

Mining is the beating heart of the Bitcoin network. Miners are the ones who replace centralized entities like banks, and they maintain the payment network. Without them, the network could not be secured and accountable. The reward is the way miners are incentivized for their necessary actions.

When a person with a Bitcoin wallet decides to transfer Bitcoin from his wallet’s Bitcoin address to some other wallet’s address, he has to create a transaction and sign it using his private and public key and broadcast this signature transaction to the Bitcoin network. Eventually, the goal is to add this new transaction to one of the next Blocks that will be added to the Bitcoin blockchain.

The job of miners is to pick up those transactions and encapsulate them into a list of transactions that make up a Block. In this process, the miner needs to verify each transaction they add and make sure there is no double-spending.

Next, the miner needs to broadcast the new Block he just created to the network. If the miner succeeds in doing so before any of the other miners, he will be rewarded with a fixed amount of new BTC that will be reflected in his Bitcoin address. To do so, the miner will have to perform the second part of the mining process – solving a complex computational mathematical puzzle.

Simply put, the miner will have to come up with a certain 64-digit hexadecimal number, which is called a nonce. This nonce will have to have a unique mathematics characteristic when calculating a particular function called a hash function. A hash function is a mathematical function that takes as an input an arbitrary amount of data and outputs a fixed-sized number. There is no real way to predict the output of the Hash function other than calculating the function.

The catch is that the only way to find this nonce number is to guess. Therefore, miners are required to guess an enormous amount of numbers until they find the right one, which fits the requirements. So, miners who have a more substantial amount or more efficient computational power will be able to guess faster and, therefore, increase the possibility of them solving the puzzle first. The number of “guesses” that the computer produces per second is referred to as the “hash rate.”

Each time a computer comes up with the right 64-digit number, a new Block is broadcast to the network. The moment this happens, the miner is rewarded with the so-called Block reward. This is nothing but a pre-determined amount of Bitcoin. Currently, the Block reward is 12.5 BTC per block. Apart from acting as an incentive mechanism, the Block reward also operates as an inflation mechanism which adds new Bitcoins to the market. The current state of the network produces one Block roughly every 10 minutes, meaning that, there are about 1,800 new Bitcoins mined every day.

As you probably know, the amount of Bitcoins that will ever exist is capped at 21,000,000. As soon as the last one of these is mined, there will be no new Bitcoins added to the network.

As we already know, new Bitcoins are produced as miners solve complex math problems and receive them as Block rewards. The amount of Bitcoin rewarded to the miner for solving the problem, however, hasn’t always been the same.

See, unlike today, the Block reward was initially set to 50 BTC per Block. In other words, during the first days of Bitcoin, whoever managed to discover a valid Block would get 50 BTC in return. If that had remained the same, the 21 million BTC cap would have been reached in about eight years.

However, the Bitcoin network was created in a way where the Block reward is decreased over time to create a self-sustaining and secure environment where nodes are incentivized to support the network. Bitcoin’s whitepaper compares this process to gold mining:

“The steady addition of a constant of amount of new coins is analogous to gold miners expending resources to add gold to circulation. In our case, it is CPU time and electricity that is expended.”

This is where Bitcoin halving steps into the picture. This is the event, which slashes the block reward in half – hence, halving. As Bitcoin is an open-source project, the lines of code which enable Bitcoin halving are readily accessible to anyone on the Bitcoin Github repository:

This line of the code reveals that a halving event will take place every time 210,000 blocks are generated. It has been estimated that this will happen approximately every four years.

Furthermore, there is one more line in Bitcoin’s code which is also quite important. It reads:

This means that once there have been 64 Bitcoin halvings, the network shouldn’t see any more Bitcoins added to it.

So far, there have been two previous Bitcoin halvings. The first one took place on November 28th, 2012. It reduced the block reward from 50 BTC to 25 BTC.

We reach the point where people get hyped about Bitcoin halving and its impact on the cryptocurrency’s price.

Historically, there seems to have been a positive correlation between Bitcoin halving events and its price. The periods following the halvings of 2012 and 2016 have both been particularly lucrative for the cryptocurrency.

On the day of Bitcoin’s first halving – November 28, 2012, BTC was trading at around $12. In September the following year, its price had increased by a factor of 10x, trading upwards of $120.

During the second halving day – on July 9th, 2016, BTC was trading at around $650. As seen from the chart, the cryptocurrency increased by more than 400% in the following year, eventually hitting its ATH value upwards of $20,000 towards the end of 2017’s unparalleled rally.

As the date of the next halving approaches, various industry experts have shared their take on the price of Bitcoin during the halving year of 2020. Earlier this year, the Chief Analyst at Fundstrat Global Advisors, Tom Lee, predicted that BTC would reach a whopping $91,000 by 2020.

Some have even gone so far as to bet on the price of Bitcoin by 2020. Civic’s CEO and co-founder Vinny Lingham recently bet Ronnie Moas, director and founder at Standpoint Research, that Bitcoin won’t reach $28,000 by 2020. The loser has to donate $20,000 to charity.