Until now, the cryptocurrency space has been dominated by centralized exchanges that help facilitate transactions from government currencies to cryptocurrencies.

Centralized exchanges, like Coinbase, are easy to access and effortless to use. Unfortunately, many have failed to secure their customer’s funds adequately. Consequently, the decentralized exchange is becoming a more popular concept. However, decentralized exchanges are having a hard time as it’s difficult for them to achieve proper liquidity. In addition, blockchains are generally not suited for accepting high volumes of transactions and reaching high scalability.

Waves-NG is simply a clever selection algorithm. Think about submitting a transaction to the Bitcoin network. Generally, it takes up to 10 minutes before a miner is elected to mine the next block including new transactions. In case of a large backlog, not all pending transactions fit into the ready-to-mine block. That means you have to wait for another 10 minutes and hope your transaction gets included in the next block. Waves-NG optimizes this process by selecting a miner in advance so that transactions can be added to the next block more or less instantly. Using Waves-NG, the only, minimal, delay a transaction may experience is the time it takes for the transaction to be broadcast across the network.

Gleb Kostarev, PR manager at Waves Platform, gave us slightly more detail about how Waves-NG works, “With Waves-NG miners create empty ‘key blocks’ in advance – rather than the blocks created retrospectively by bitcoin miners. Then ‘micro-blocks’ containing the most recent transactions are immediately added to these key blocks. The key block contains a public key that will be used to sign the transaction in the subsequent micro-blocks. The micro-blocks signing process is more secure and also faster as micro-blocks can be generated very quickly.”

Obviously, it’s a great piece of technology that has improved mining efficiency. This technology also offers significant benefits when used in combination with a decentralized exchange like the Waves DEX. It allows Waves peer-to-peer exchanges to reach the speed of a centralized exchange. Waves-NG allows both bots and high-frequency traders to operate on the exchange, just as they do on other crypto trading platforms. 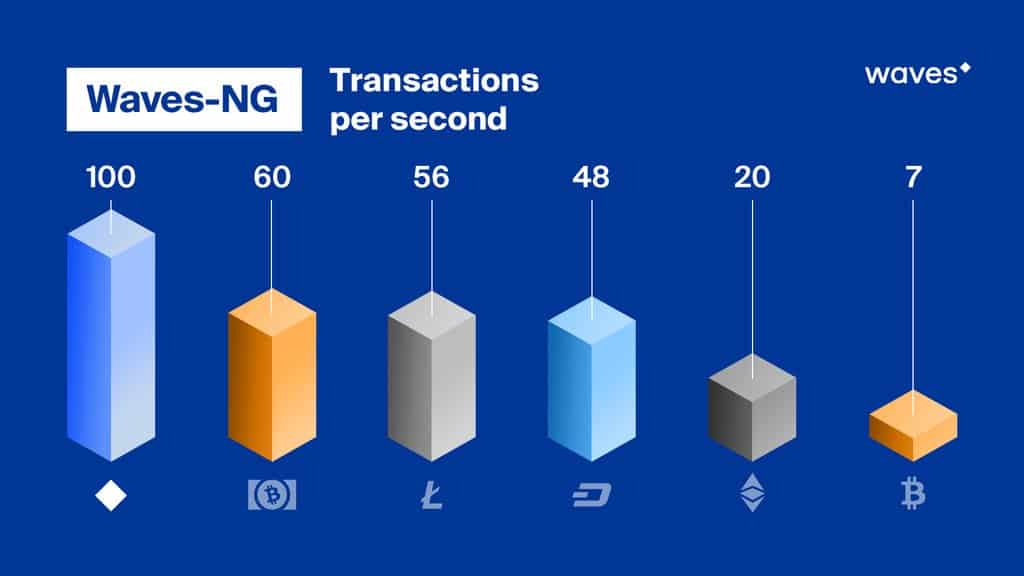 How does the Waves DEX work?

This is pretty cool too. The Waves DEX uses something called ‘Matcher nodes’ which are capable of pairing traders’ orders almost instantly. The ‘matcher nodes’ are centralized systems, although the settlement occurs on the blockchain. Using this hybrid combination allows the Waves DEX to reach very low trade processing times of only a few seconds.

Decentralized exchanges have not been commonly used as they typically have a very low volume because their decentralized nature means they were not ready for high-frequency and bot trading. Waves DEX combines the best of both worlds without unnecessarily compromising security.

Waves DEX has also managed to integrate fixed fees for every transaction, large or small. Miners maintain the blockchain and update the ledger when new transactions are made. The miner sees no difference between large or small transactions, so the cost to the miner is the same. In common with most blockchain platforms, that also means fees are fixed. And because Waves is a proof-of-stake blockchain with low energy and hardware costs for miners, those fees can be very low too: just 0.003 WAVES for a completed trade, far less than the commission on regular exchanges.

The Waves DEX allows you to trade Waves assets almost instantly, with low fees and anonymity in the back of your head. Orders are encrypted before they are sent to the “matcher nodes,” giving users a degree of privacy that is not available on other decentralized exchanges. 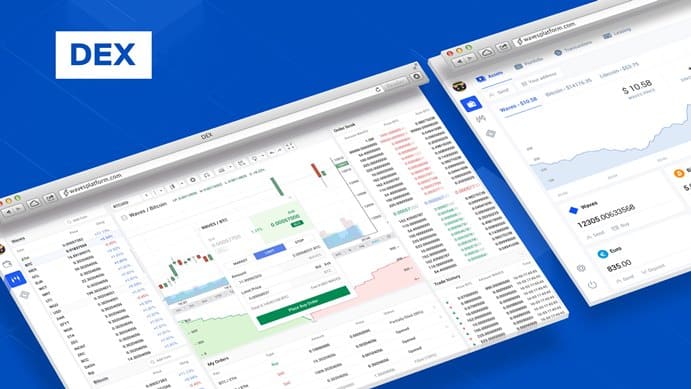 Atomic swap technology seems to be the golden future for further blockchain development as it could leverage the whole community to the next level. Whilst it is relatively straightforward to exchange tokens when they are hosted on the same platform (e.g., WAVES and WCT), the challenges involved in exchanging coins across different protocols (e.g., BTC and ETH) are considerable.

Gleb Kostarev explained about the status of Atomic Swap development on Waves, “Atomic swaps allow parties to exchange different cryptocurrencies trustlessly. Preparations for implementing atomic swap functionality are in development on the Waves platform, with the right research teams being sought. Integration of atomic swaps will allow ERC-20 tokens to be traded on the Waves DEX, amongst other use cases.”

We really hope Waves, or another blockchain platform, succeeds in exchanging coins across different protocols.

To end the article, let’s focus on the initial thoughts on the creation of Waves. Waves was founded on the idea that blockchain is a technology of the people. Waves’ goal is to support a wide range of stakeholders and provide access to a properly functioning blockchain ecosystem. The platform is aimed at consumers, entrepreneurs, communities, services, and even individuals. As mentioned earlier, everyone has the right to have access to blockchain technology.

The Waves Lab is an incubator that monitors promising businesses and ensures that they have access to the right expertise to propose a viable token model. In general, the Waves Lab provides startups with advice, resources, and expertise. The Waves Lab has proven itself by successfully completing two crowd sales – Simdaq raised $5 million, and MyTrackNet attracted $600,000 in its pre-ICO.

Meanwhile, Tokenomica is the first global, blockchain-based investment bank. They are developing a centralized platform which will work on top of the Waves blockchain, and provide 100% compliant legal frameworks for different types of token crowd sales. Tokenomica plans to connect with regulators and banks and to organize self-regulation.

The Waves ecosystem is also focused on providing venture funds for the best initiatives that go through the Waves incubator. The Basics Fund is a blockchain venture fund, concentrated on the Waves platform and holding a diversified portfolio of crypto assets.

Finally, we mentioned ‘communities’ as being one of the possible stakeholders. Waves loves to support the building and creation of new Waves communities. To aid this, the Community Club provides a framework for new ambassadors to join the Waves ecosystem and establish new local communities.