In recent years, new regulations around the use and sale of cannabis across the US and Canada has helped the cannabis industry take off. The legalization of marijuana has led to an explosion of cannabis businesses, many of which have become publicly traded on the stock market.

Cannabis stocks bear a striking resemblance to cryptocurrencies because both are part of very new and emerging industries that are still working to achieve full regulatory compliance (marijuana has been around forever, but it is very new as a legalized industry). Both are experiencing high volatility as a result of the market not yet understanding how to value the assets. Lastly, both have a special attraction for retail investors due to their simple utility and ease of access.

Cannabis has long been declared an illegal substance in many countries around the world. In the US, cannabis was labeled as a poisonous substance as far back as 1906 and became prohibited in the 1920’s. However, it wasn’t until 1970 that cannabis was officially outlawed for any use (medical included) with the passage of the Controlled Substances Act (CSA). The criminalization of cannabis led to many unnecessary arrests and legal proceedings that have had lasting effects on the country’s population to this day. Over the preceding years, certain states like California sought to implement policies that conflicted with federal law by making cannabis legal for medicinal purposes. By 2016, the legalization of medical cannabis expanded to more States, before finally expanding to include recreational use.

The conflict between state and federal law has made it difficult for many cannabis businesses to establish themselves legally in the United States. However, laws are starting to loosen up as the government recognizes that the revenue potential of taxing cannabis consumption is much greater than criminalizing it (the global legal cannabis market is forecast to reach $57 billion by 2027).

Recreational use of cannabis is illegal in the vast majority of other countries, with some exceptions for medical use. Many countries in Europe are slowly starting to decriminalize cannabis. However, in countries like China, extreme measures are taken to prevent the use of the drug, even going as far as to inflict the death penalty for those caught with it.

Cryptocurrencies exist in a similar grey area (and are also not coincidentally banned in China). Many governments associate the use of cryptocurrencies with money laundering, tax evasion, funding of terrorism, and illegal drugs (like cannabis). These claims may have had some validity back in the early days of crypto (2009-2013). However, in recent years, the technology has progressed to offer workable solutions to problems around banking, lending, logistics, and a whole range of the social, financial, and economic challenges we face today.

Governments all over the world are slowly starting to recognize the potential of blockchain technology for creating more transparent and open systems and reducing bureaucracy.  Exchanges like Coinbase, Shapeshift, and Gemini are working to settle these concerns and achieve regulatory clarity for the entire crypto space.

New emerging markets are often highly volatile due to investors coming on board with widely varying expectations of how the asset should be valued. In the case of crypto, before 2017, no one really knew how high Bitcoin and altcoins would go in price once they achieved ‘mainstream awareness’. A year later and we discovered that number was $20k for Bitcoin, $1,500 for Ethereum and about an 8-10x bump in price for most altcoins. This was, of course, a bubble that was created by the irrational exuberance of retail investors not understanding that altcoins would need to prove their actual utility before they could justify the valuations that the market was assigning to them. Today most altcoins are down 90% from their all-time high, which shows that there is still a lot of work to be done before these blockchain companies can achieve those ATH prices again. In the meantime, we’re currently experiencing a trader’s market, where price is determined almost purely based on speculation. This, along with the relatively small size of the crypto market as a whole (about $200 billion) leads to high volatility.

In a small sized market, wealthy traders can force prices to pump or dump simply by flooding exchanges with large buy or sell orders. As we’ve recently seen all it takes is $1 billion to crash Bitcoins price by 10% and Altcoin prices by 20%.

The cannabis industry is dealing with the same traits that lead to high volatility. The market is still very new, small in size, and filled with companies that haven’t yet accurately justified their public valuation. The cannabis industry experienced its own bubble from December 2017 to February 2018. During this time, stocks shot up 10-30% on a daily basis, only to crash by 30-50% 2 months later.

FOMO and investors overestimating the impact of the ‘next big thing’ generally leads to new assets like crypto or cannabis becoming overvalued. They then crash down to a more realistic price and slowly have to work their way back up based on the fundamentals of their business and the value they produce.

For a certain segment of the population, cannabis plays a significant role in their everyday lives. Many use it recreationally or medicinally. This stands in stark contrast to more complex assets like bonds, ETFs or REITs, which bear no real utility to the average person, take a more sophisticated understanding of financial markets in order to trade profitably, and may, therefore, be intimidating for the average retail investor.

Similarly, cryptocurrencies represent a new type of digital money that individuals can store and transfer as if they were their own bank. Retail investors are attracted to crypto because it is fairly easy to understand, easy to access and gives them the freedom to spend and transact without dealing with traditional intermediaries who take up their time and charge them excessive fees.

Cannabis stocks and altcoins are 2 kinds of assets that belong to newly emerging industries that are highly volatile, working towards full regularly compliance, and are ubiquitous and easily accessible to retail investors.

These three factors make cannabis stocks and altcoins potentially very profitable to trade and invest in, yet also very risky and insecure when compared to traditional stocks or bonds. As these industries grow and mature, volatility will eventually subside, and more mainstream investment funds will welcome them into their portfolio. Until then, trade with caution and learn all you can about where the short and long-term value lies within each cannabis stock or cryptocurrency asset you possess.

How to invest in cannabis stocks

Cannabis stocks can be bought as any NYSE and NASDAQ stocks. We won’t recommend on any specific, you can have a share (or fund) of the leading ones. eToro had recently launched a new cannabis care copy portfolio. 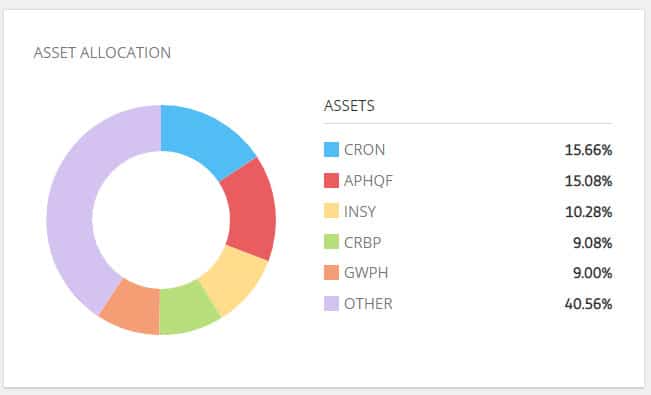