Large traditional market players don’t seem concerned about the continued drop in cryptocurrencies since the start of the year. This is because they are accustomed to planning their strategies well in advance, they are now forcing out some “random” investors to take their place.

In recent months it has come to light that the Rothschilds are working on their own blockchain, which may use a token called IMMO. Some sources say it will be some sort of stable coin. According to others, it will be a private blockchain to solve the problem of accounting for the Rothschild’s accumulated assets. There is much speculation on the importance of the upcoming IMMO project. So, we have asked leading cryptocurrency experts their opinions on the invasion of large banking dynasties into the world of cryptocurrencies. Is the appearance of the projects, such as IMMO, mentioned by Vitalik Buterin just a while ago, useful to the cryptocurrency world? Or are banking dynasties affecting it negatively? Here’s what the experts think:

Banking dynasties foray will lead to a manipulated token economy

“The IMMO appears to be a private chain, managing their internal distribution of wealth. Without more visibility, it is hard to make any conclusion from it.

The large banking dynasties foray into this space will lead to a manipulated token economy, in the same way they have traditionally controlled the financial world. These major players will control prices, instead of the crypto community. The current depressed prices from their highs, nearly six months ago, seems to be a case of manipulation, but it remains uncertain who has been at work on this.

My conclusion is it will be dominated by these major players. I am inclined to believe that the only way to counter this is, that all crypto coins should decouple themselves from one another so that it is difficult to control the entire crypto economy. Right now, the pivoting coin is bitcoin. The coin’s change in value affects the entire market. It should not be the case.”

Thomas Power, professional speaker, board member, and advisor to numerous Blockchain startups around the world, including 9Spokes:

It takes between 15 and 18 years for new technology to be challenged, then questioned, before it is adopted and accepted. We won’t really see cryptocurrency mainstream before 2023 to 2026. Traditional brands that come in, like JP Morgan, or Goldman Sachs, or Morgan Stanley, any traditional banking brand or family brand: Rockefeller or Rothschild, take time to consider new technology. Old money and old names help people consider the new world, new projects, and new techniques. New ideas always come from the young, but the money comes from the old. That is the same with all of history. So, I see it as completely positive.”

Running from fiat to Bitcoin

Tim Draper, the founder of DFJ Venture Capital, №7 on the Forbes Midas List, №98 on the 2014 Worth Magazine 100 Most Powerful People in Finance:

“I expect a run away from fiat and toward bitcoin. Once one bank breaks the logjam, the others will follow, or go the way of the dinosaur.

Bankers have resisted long enough. Now it is time to embrace the new world. Bitcoin is just better than Dollars. Some of these Tethered cryptocurrencies, such as IMMO, will make some sense, tethering currencies to real estate so that it is more easily tradable for instance. Tethering to existing fiat doesn’t make as much sense since you then regress to currencies dictated by the whims of politics, rather than bitcoin or others that are decentralized, frictionless, fair, and honest.”

I don’t expect any innovation from dinosaurs

“I’m not really concerned or think much about the large banking dynasties getting into bitcoin. They move way too slowly and conservatively into things and, in my experience, they mostly only do things to get some press. That said, if they actually buy bitcoin, that’s good.

I don’t really expect any innovation coming from these lumbering dinosaurs. The only real risk is that they start trying to get government regulation to protect their turf.” 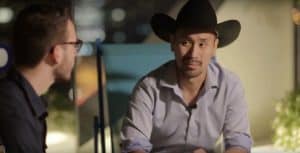 “The last 12 months, and before, have been very wild west in terms of crypto. Now we are seeing a move towards de-risking this area for investors, with a rise in KYC, AML, and white listing. These are good trends and are encouraging more traditional investors to move into this space. We will only see more and more of this going forward.

Banking organizations need to get involved or see their breakfast, lunch, and dinner all being eaten by hungrier, keener more nimble up and coming tech payment startups. If our traditional banking services don’t innovate and deliver the level of services we have come to expect from other areas of our daily lives, then banks will deservedly go under.”

Keith Teare, Executive Chairman of the Investment Committee at Accelerated Digital Ventures, General Partner at Venture Network, the founder of Archimedes Labs in Palo Alto and founding shareholder at TechCrunch:

“Anybody who sees cryptocurrencies as part of the evolution to globalization, and the gradual replacement of national currencies, should see the entry of mainstream banking as a good development. When the mainstream chooses to engage, it is explicitly shifting its store of value from the old world to the new world. Engagement with the real world is inevitable if crypto is to grow, and the real world brings with it challenges. Shrinking away from those challenges makes little sense. So bring it on.”

Mike Costache, the founder of Blockchain Investors Consortium (BIC), CEO of d10e and KrowdMentor and a member of the advisory board of Token-as-a-Service (TaaS) fund.

“It’s only natural for major players to not want to be left behind in any innovation. It takes them a while to publicly announce it as they have their reputation to defend and so they need to make baby steps.

One day EOS or Bancor may be classified as a crypto “dynasty” the same way you are now asking a question about “banking dynasties”. Everyone has their roles, and only history will eventually show us at what point such dynasties affected things in a negative or positive way.”

Innovation within the industry is generally positive regardless of the source

“Banks are largely taking a wait-and-see approach to cryptocurrencies and blockchain, as most institutions are still unsure about how to implement and benefit from this relatively new technology. We are starting to see signs of uptake, though, with some financial institutions deploying trading, custody, and retail services. As pioneering banks enter and legitimize the space, and as regulatory clarity solidifies, financial institutions will gain the confidence needed to enter the market. The arrival of new players will likely lead to both increased adoption of cryptocurrencies and a more defined regulatory framework.

As for the IMMO, there are insufficient details to opine on the impact it may have on the market. However, innovation within the industry is generally positive because ultimately consumer choice will dictate adoption, and competition breeds the best possible solutions.”

We can draw various conclusions about the current fall of bitcoin and associate it with the arrival of large traditional players. But the opinions of most experts reflect the opposite: the arrival of old money will allow the cryptocurrency market to grow.

* The article was written by Rudolph Waltz to CryptoPotato