The following is an objective review of Merculet ICO. The review is based on the criteria that we think are important for an ICO project to succeed. We measure a successful ICO by estimating short and long-term ROI. The following is not financial advice.

Merculet is trying to reconstruct the online traffic market. Bitcoin, Ethereum, and many more token based projects have created solid and growing communities behind them. Merculet is offering real world businesses to easily custom build their own token economy ecosystem in order to attract new users and hold strong to their existing ones.

The Merculet infrastructure has been integrated and tested inside MagicWindow for more than a year now. MagicWindow, launched 4 years ago, provides content AI services, SDK data analysis as well as the intelligent content distribution to new and established businesses. It has a large customer base, serving over 3,000 companies.

Merculet successfully raised 36k ETH via a fair token sale at the beginning of May. It is soundly backed by one of the most influential VCs in the crypto sphere, Fenbushi Capital.

The team consists of 30 full-time members, mostly from MagicWindow, and is expected to grow by 50 more in the near future. It is well positioned in the market to integrate its infrastructure into more businesses and to grow the ecosystem surrounding their native token (MVP).

Let’s get going with our project evaluation!

Merculet is a project developed by core team members of MagicWindow.

MagicWindow, founded by Ivan Jiang 4 years ago, provides content AI services, SDK data analysis as well as the intelligent content distribution to new and established businesses. It has a large customer base, serving over 3,000 companies.

Through the experience of servicing many startups, the team realized that it is extremely difficult and expensive to acquire new users for a new startup’s ecosystem.

The most valuable asset in the digital marketing ecosystem is user attention. User attention is a term used to describe the attention we give to content that we, as users, are exposed to on the web. For example, while reading or writing a post, playing an online game, submitting personal data to the server, and more. The market cap of Facebook is evaluated at approximately $508 Billion USD, mainly because on a monthly basis it constantly attracts the user attention of 2.2 Billion people across the world. This user attention is efficiently monetized by Facebook.

User Attention of Users is Owned by the Third Party Providers

The following is a made-up example for us to understand the current advertising ecosystem.

Let’s say Bob is to launch his startup, an online chess game. Bob’s business success relies on his ability to attract a user base to his new and cool chess game. Bob has many advertising options, and most of them rely on the user attention that users spend online. To advertise his game to his potential clients, Bob will most probably pay a third party provider, either Google or Facebook, to post ads to his potential clients or an advertising company that publishes the relevant data to the relevant user in an app or a website.

In any of the above cases, Bob will pay the third party provider to reach the user’s attention.

Merculet is launching an ambitious infrastructure that can reconstruct the way a business communicates with its customers and attracts new users. The infrastructure will be easily implemented into existing businesses, in order to help them to precisely measure the contribution of their customers to the business and to easily compensate them accordingly.

Merculet offers a model in which the attention of a user is compensated directly by the business, Business to Customer (B to C), without the involvement of a third party.

Merculet offers a business a way to easily create a secured and transparent ecosystem for it to grow. It allows a business to do the following:

Today, a project which aims to serve hundreds of thousands of internet companies and millions of users can meet companies’ demand for stability and scalability, and also meet users’ demand for freedom and security. Merculet set-up a multi-tier architecture which is multi-chain and multi-asset, and which can handle up to 100,000 TPS in the internal economy of each internet company which includes its own UAT token, and still use the advantages of security and freedom which is provided by a public blockchain.

At a high level, the Merculet infrastructure includes 3 tiers. The top tier is an internal tier called the Internet Enterprise Tier. This is where each internet company can manage their own internal economy of UAT using an off-chain technology. The second Tier is the Internet Asset Tier which is responsible for recording UAV and circulating UAT. This tier also allows different users from different companies’ networks to exchange their custom UATs. This tier was built based on Fabric of Hyperledger, which is the technology that helped the Merculet team to implement the Internet Asset tier as a permissioned blockchain (Consortium blockchain). The third tier is the Native Asset Tier and is in charge of anchoring the UAT’s tokens to a cryptocurrency. This can be the MVP token, the native token of Merculet or any other public blockchain’s token. 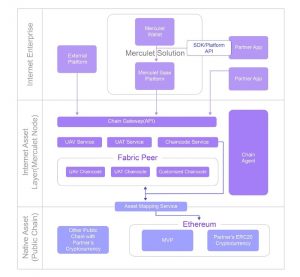 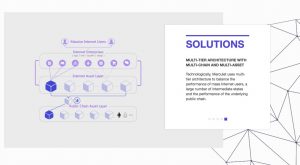 In the diagram, shown above, you can see the general structure of the Merculet tiers infrastructure:

This tier was designed for the internal economy of each business that adopted the Merculet platform. This activity can be transactions of the custom UAT or any other custom value inside the network of the company.  This tier is conducted as an off-chain environment, and this property allows each company to run more than 100,000 TPS (transactions per second).

Based on Fabric of Hyperledger, Merculet builds its Internet Asset Tier as a permissioned blockchain. Permissioned Blockchain or Consortium Blockchain is a partly private blockchain where only a few selected nodes are predetermined to validate transactions. This structure provides many of the same benefits provided by a private blockchain, efficiency and transaction privacy. This structure ensures that there are no economic methods like transaction fees or miner rewards necessary to ensure the honesty of nodes. The TPS of the Internet Asset Tier is about 300-1000/s. 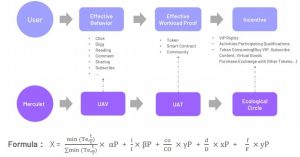 This tier is in charge of anchoring and circulation of UAT in front of some cryptocurrency, this token can be Merculet’s native token (MVP) or any other tokens that Merculet’s partners issue on the public blockchain in the future.

Currently, the Merculet infrastructure has been tested via the MagicWindow services for more than a year. The next major milestones are:

Test and customize integration of Merculet with 15 partners.

Has 12 years of experience in the IT industry in HP, SAP, EMC and more. As the CTO of MagicWindow, led the team to design and implement the enterprise deep-linking service (mLink), and the intelligent content distribution platform (mContent), ensuring the stability of the distributed system  for handling more than 10 billion requests every day.

Shen Bo – Co-Founder of Fenbushi Capital alongside Vitalik Buterin. One of the earliest and most respected Venture Capitalists in the crypto sphere.

Bin Sen Tang – Founder and CEO of Elex. Elex has become a benchmark in the internationalization of Chinese internet companies. In the past few years Elex has co-operated with the top Internet companies from China, having created many breakthroughs and classic cases, including Baidu, Tencent, Alibaba, etc., and top game companies (including DDTank, Perfect World, Giant Network, Taomee Network, etc.). Today, more than 50 million active users worldwide use Elex services, covering over 40 countries in North America, Asia, Europe and South America.

Merculet is aiming to reconstruct the way a business communicates with its new and existing customers. This is a huge market that is growing yearly. Merculet’s team is from MagicWindow which was launched 4 years ago, and the company has helped more than 3,000 apps mainly with a user growth aspect with AI services. Merculet will use its position and business relations to penetrate the market. It has already strategically partnered with 3 companies to test and integrate the Merculet infrastructure – MagicWindow, Elex, and SoloAdds. Elex, for example, has become a benchmark in internationalization of Chinese internet companies and is servicing top Chinese companies and 50 Million users worldwide.

Merculet has also strategically partnered with Fenbushi Capital. This gives great credibility to the project and is also a great way to penetrate and create partnerships in the crypto ecosystem.

We should expect more partnerships to be announced in the near future.

As more companies use Merculet’s solution, the ecosystem around the MVP token will grow.

Any asset on the market is determined by supply and demand.

To sum up the terms, there will be a comparatively low supply of MVP on the market once it is listed on exchanges. The supply will grow over time as the business grows (Private sale and team allocation is vested). The big holders will receive only 20% of their investment in the first month, while the small holders were capped at 5ETH, and based on previous experience, we should expect those small holders to hold their tokens for a relatively high return on investment.

It is not clear that the MVP has a pivotal role in the Merculet ecosystem. The solution for the business offered by Merculet is based on the UAT token, the business custom token. We should expect for MVP demand if customers want to exchange their UAT into MVP, and later to other cryptocurrencies, or if the business purchases certain services from Merculet. It is not yet clear what the services will be that are only purchased with MVP.

There is an intention by the team to strengthen the correlation between the MVP demand, and the success of the Merculet platform. Not yet published. Like many ICO projects, the team and advisory board hold 20% of the tokens. We are confident that the team has a strong interest in that correlation happening.

Team & Advisory board:  Core team has a vast experience in user acquisition, 30 full-time members with 4 years history of working together. Advisory board includes Shen Bo and Roger Lim Score 9

Stage of the project: Demo available, infrastructure is already being integrated and tested with MagicWindow, Elex, and Soloadds. Full launch with all features expected for Q2 2019. Score 9

Token use:  UAT, each business’ custom token can be exchanged with other cryptocurrencies only through the exchange to MVP. Score 8

Whitepaper: Whitepaper is a bit complicated to understand though it consists of all the necessary details regarding the Merculet platform. Score 7.5 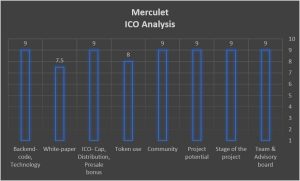