The crypto market is experiencing another correction against the dollar. The consensus event affected the market for the better, but did not meet the expectations of the price hikes behind it, and we saw a continuation of the downward trend of Bitcoin and the other currencies.

The declines in Bitcoin came at a relatively low volume compared to previous declines that came with a very high volume, indicating a lack of confidence in the trading arena and it seems that last year’s big wave is behind us.

Bitcoin already has 37.7% of the transactions made in SegWit addresses, which account for 14% of the network’s fees. Another good reason to move into SegWit.

In conclusion, the market is still correcting from last year heights and at times like this the market is turning to leveraging alternative currencies, leveraging Bitcoin and etc. It is difficult to predict whether these trends will continue to appear to be relatively safe in these currencies as long as Bitcoin maintains relative stability around $ 8K.

Germany’s Second Biggest Stock Exchange Launches Crypto Trading of Bitcoin, Ethereum, Litecoin and Ripple. Börse Stuttgart, Europe’s largest cryptocurrency exchanges that handles $100 billion in trading volumes has announced crypto trading through a subsidiary. Trading is due to commence in September, before a competition with entrants standing to win as much as 3 BTC.

Circle Announces USD Coin. Circle has announced its USD coin, a fiat-backed stable coin that is pegged to the US dollar. Circle will be traded on the Poloniex exchange. The purpose of the cryptocurrency is to create a hedge for crypto traders to ride out the waves of volatility in the market. USD Coin will also be ERC20 compatible, meaning that it can easily be added to most exchanges and should work with most ERC20 compatible wallets.

Alibaba’s Jack Ma: Blockchain Is for Real, Bitcoin Is a Bubble. Jack Ma, CEO of e-commerce platform Alibaba made some statements condemning bitcoin at the 2nd World Intelligence Congress held in Tianjin, China. Ma said: “I have been studying the blockchain for years and the blockchain is not a bubble; bitcoin is.” At the conference, Ma kept his strong position on blockchain technology in general, particularly with its ability to solve privacy and security issues. Alibaba presently holds more blockchain patents than any other company in the world.

Steve Wozniak: Bitcoin and Blockchain is the ‘Next Major IT Revolution’. Apple co-founder Steve Wozinak praised bitcoin and blockchain technology at the WeAreDevelopers World Congress held in Vienna, Austria. He claimed that the blockchain will be a “world-changing technology,” and that “[the blockchain] is the next major IT revolution that is about to happen.” The statements were made just after the conference as opened, during his 45 minute ‘fireside chat.’

South Korea Set to Adopt G20’s Unified Cryptocurrency Regulation. South Korea, the third largest cryptocurrency market in the world, said that it would create a set of “unified regulations” in regards to cryptocurrencies. A local media source has also reported that Korean regulators will apply the Financial Action Task Force’s standards to its cryptocurrency policies.

Bitfinex Now Wants Your Tax Information ‘In Case’ Authorities Ask For It. Bitfinex, a cryptocurrency exchange registered in the British Virgin Islands, has sent its users emails informing them that they would be required to submit their tax information as part of a new KYC requirement. In the email to Bitfinex’s customers, it’s claimed that was to comply with British Islands Law, the U.S Foreign Account Tax Compliance Act (FACTA) and the Organization for Economic Co-operation and Development Common Reporting Standard (CRS).

A Bank In Argentina Is Now Using Bitcoin for Cross-Border Payments. Argentinian bank Banco Masventas stated that it would enable its customers to send cross-border payments via bitcoin, as an alternative to Swift. As part of the statements, Jose Dakak, the principal shareholder of Masventas, stated that the move was aimed to lower the bank’s cost of transactions, as well as to improve its mobile and digital services.

Florida County Tax Collector Becomes First Government Agency to Accept Bitcoin. Joel Greeberg, a Florida tax collector, said that it would begin accepting bitcoin and bitcoin cash through the payment processor BitPay which started last summer in the United States. Greenberg took office in January 2017, and since then has introduced numerous technologies like artificial intelligence and blockchain technologies to his team.

The 50MA indicator has been tested in the past few days, trading around $8,200 and the support levels of the range are squinting down towards $8,000 indicating weakness. It seems that the next support levels are at $7,800, with resistance being built around $8,600. 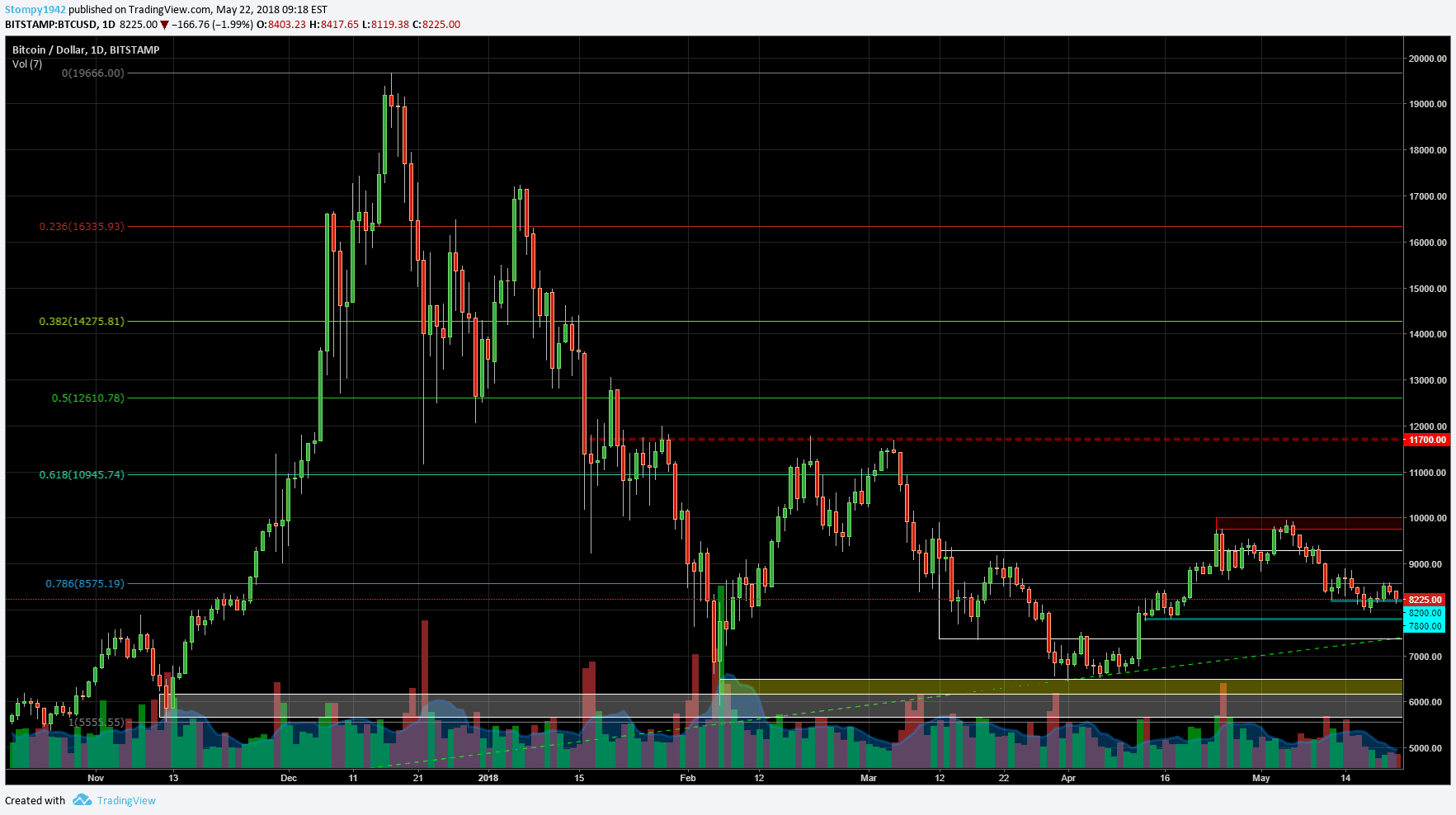 Against the dollar, it was a volatile week but seemed to stabilize around $680. Support was around $660 in this, and the resistance range was at $720. 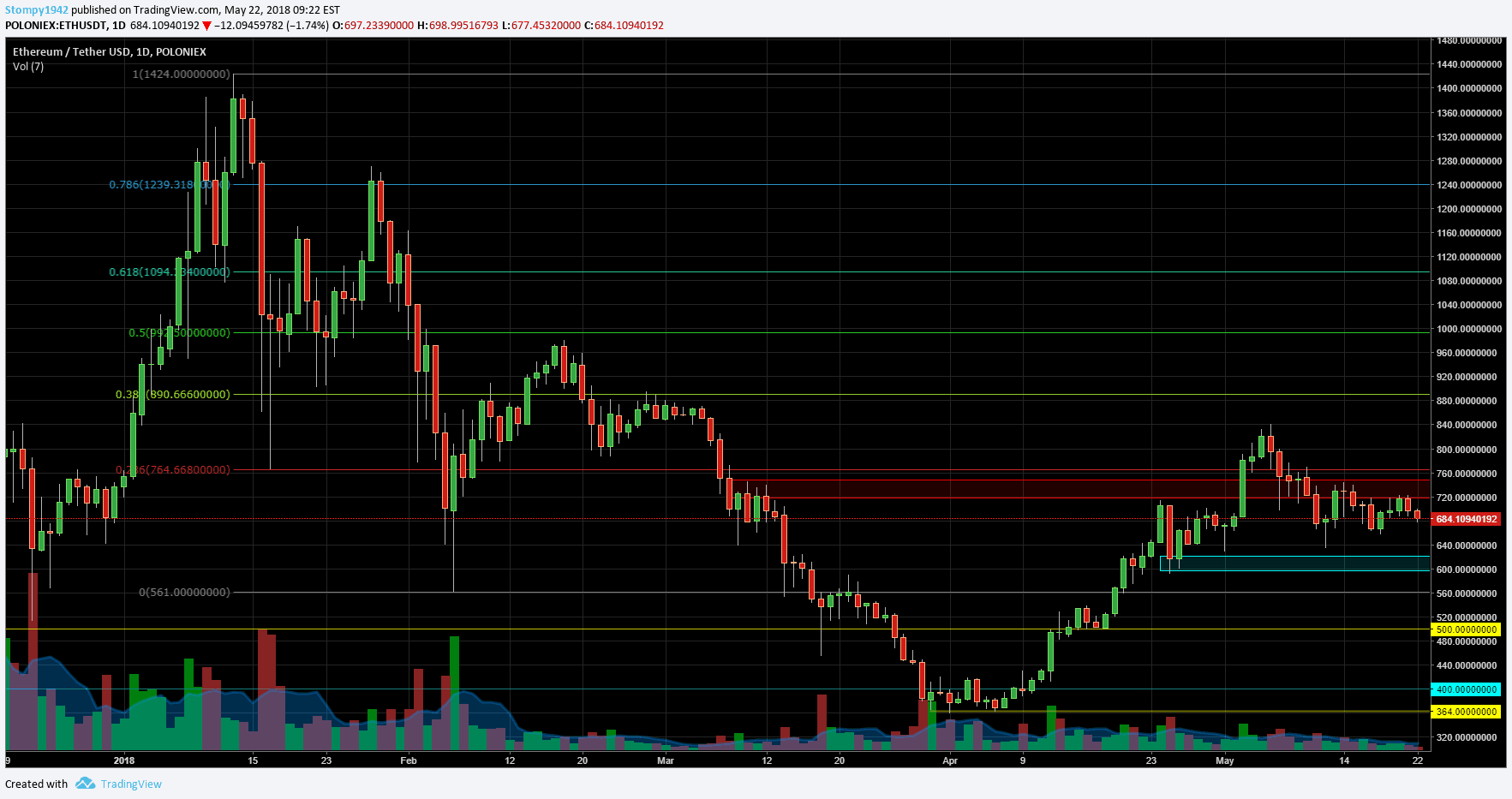 Facing the week’s steady movements with attempts to break up and traded around 0.083 BTC with support at 0.08 BTC and resistance at 0.085 BTC. 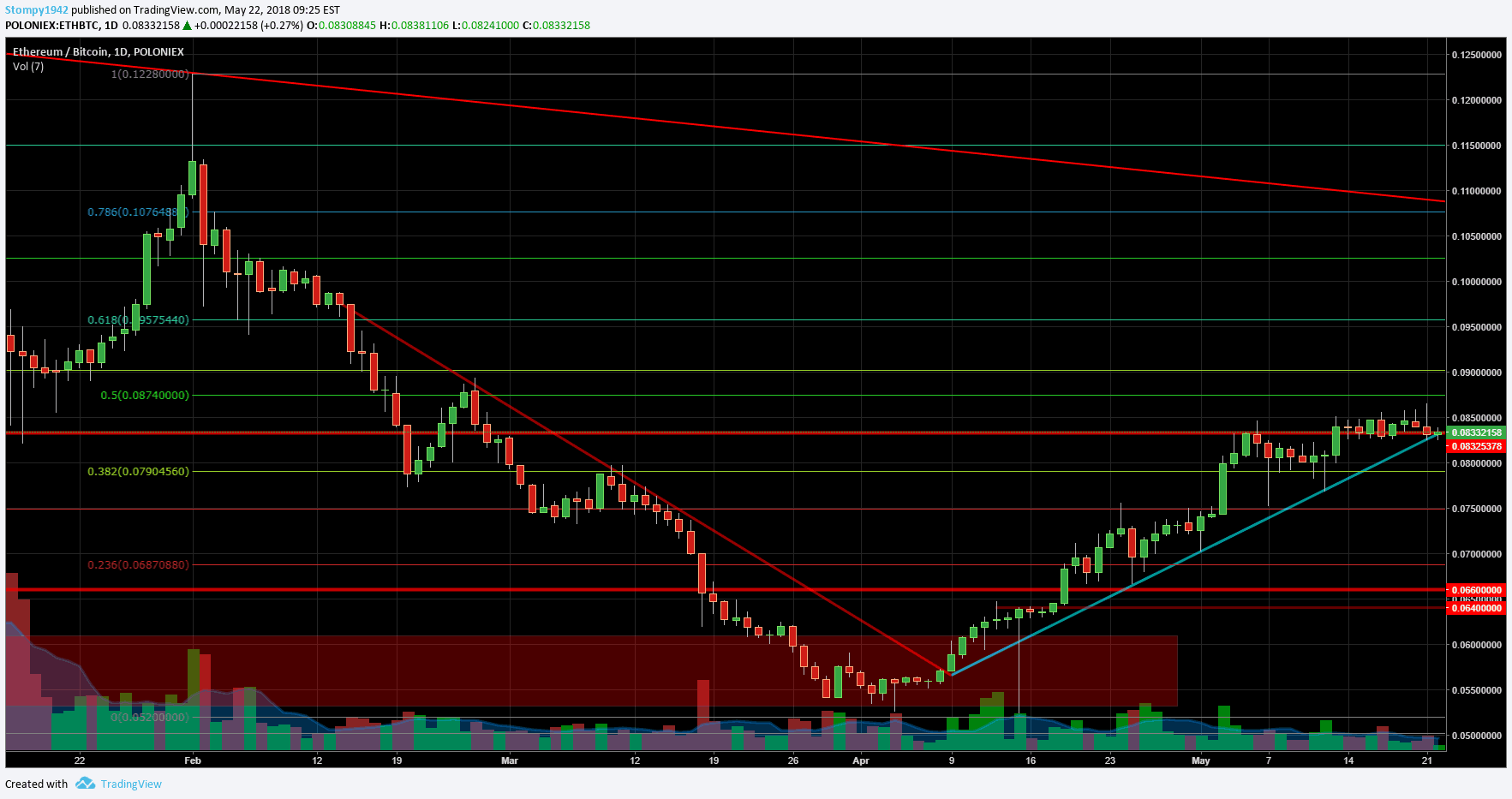 Against the dollar, support broke at $1,300 and turned into resistance. A sharp drop brought us to $1,130 where support is also at this point, and trading around $1,180. 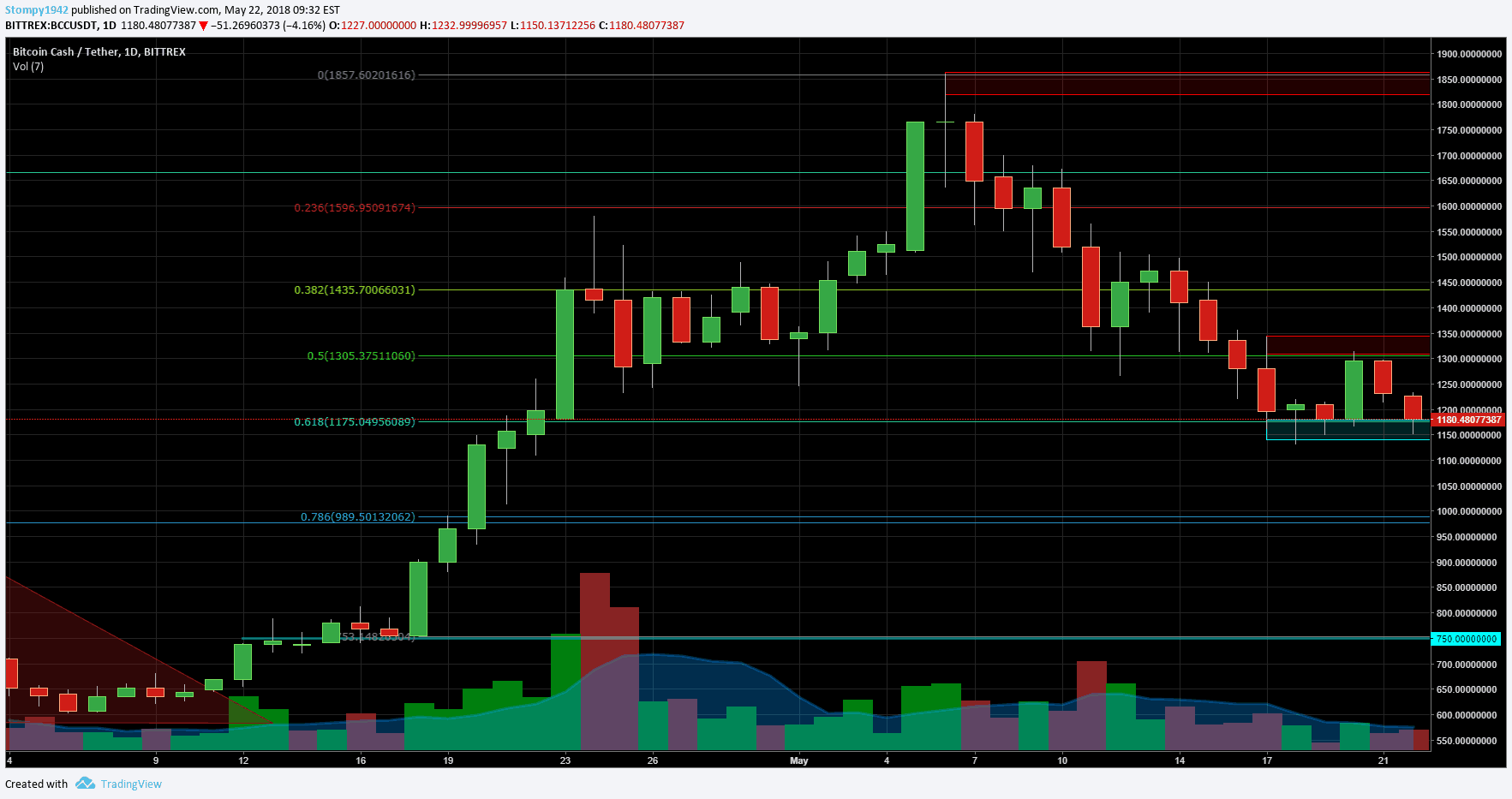 Against Bitcoin as well the downtrend of support was around 0.16 BTC did not hold back to May’s support levels around 0.14 BTC traded around 0.143 BTC resistance at 0.16 BTC. 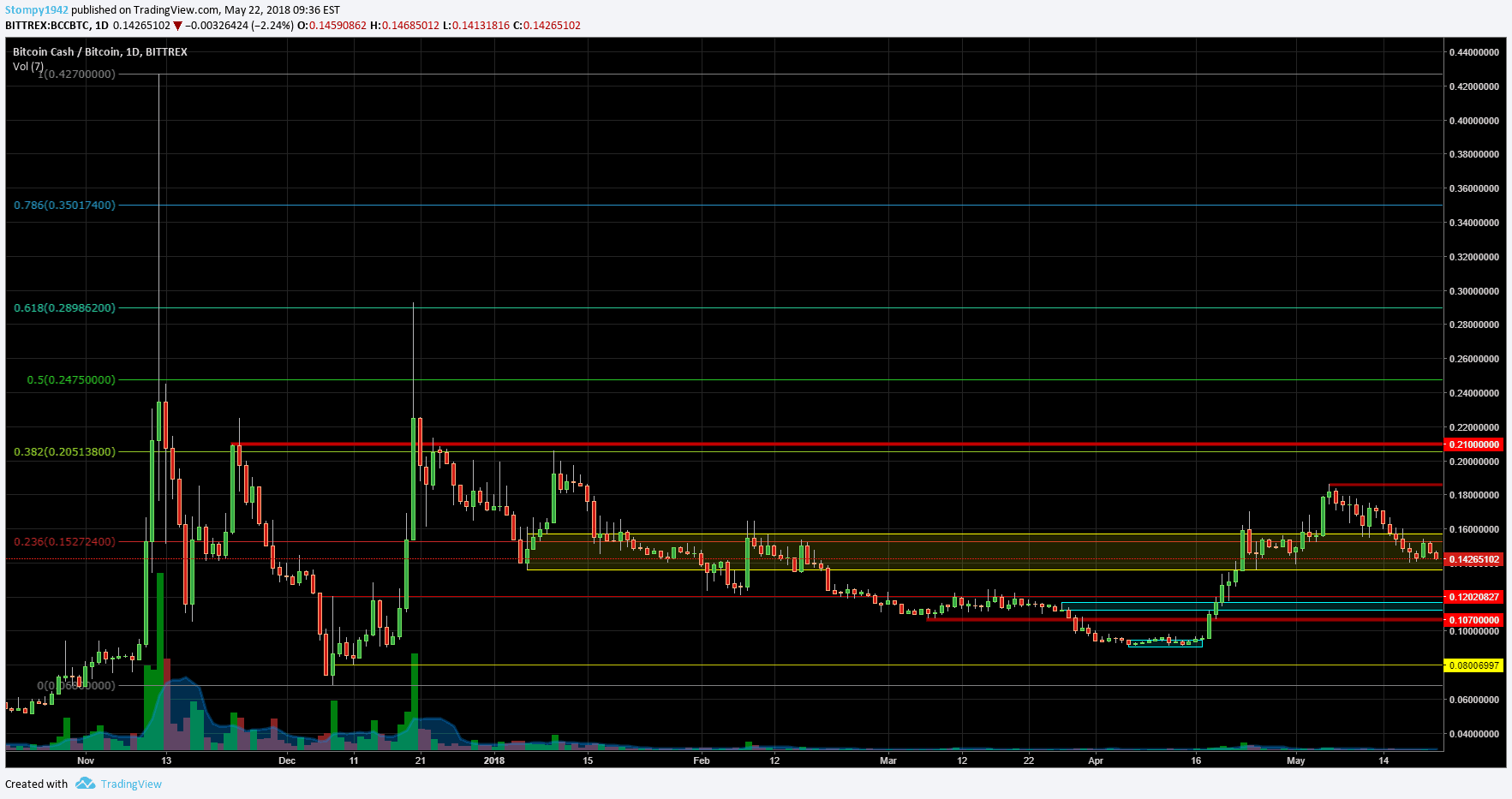 Against the dollar, we returned to the analysis of Binance, and the trend seems to continue, and on the graph we can see clear resistance levels. If they break, we can expect a return to the peak levels in January. It traded around $14.5, and volatile in this range with support at $12 resistance at $15.3. 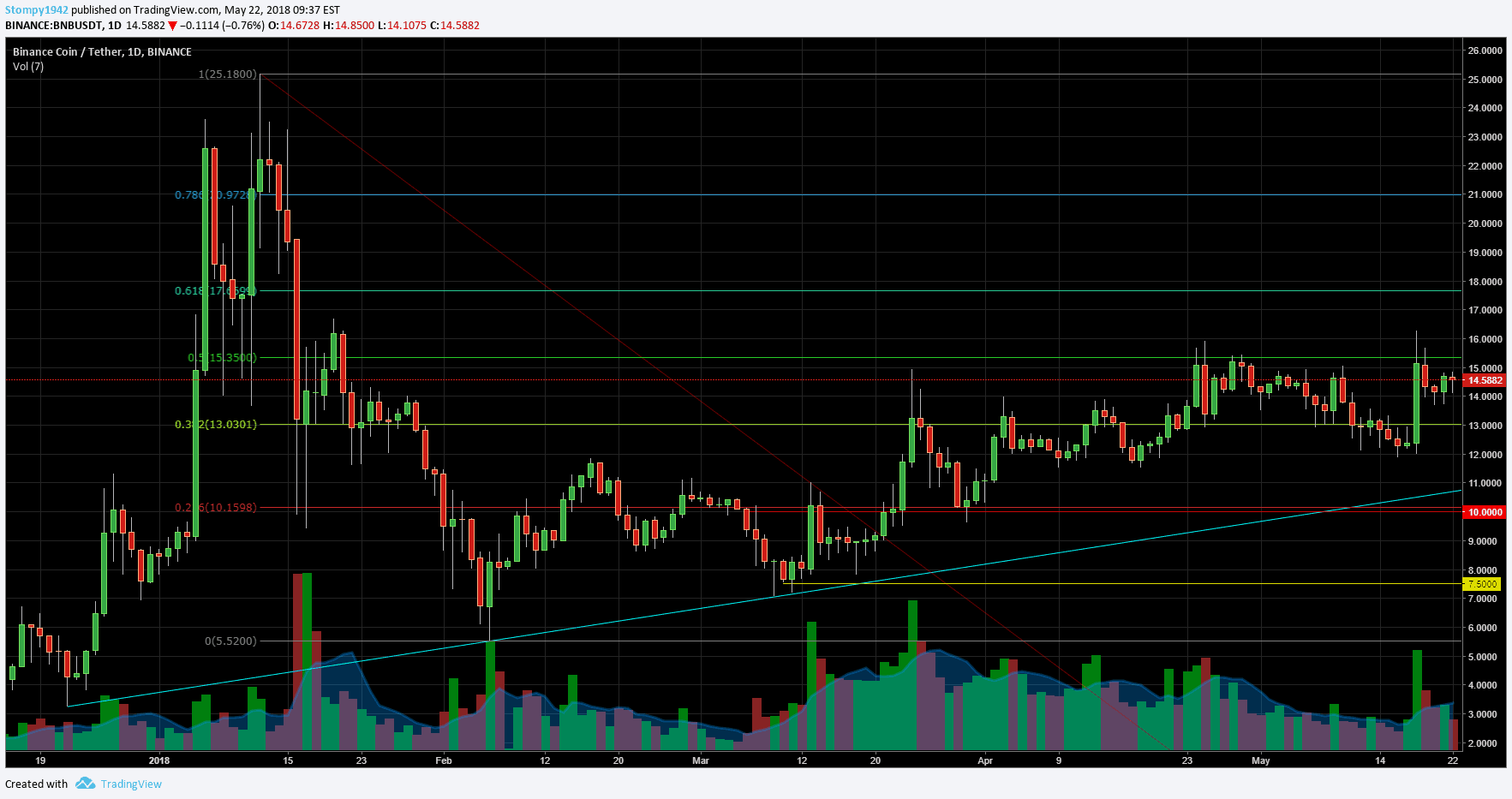 Against the Bitcoin support, it was around 0.0014 BTC. Throughout April and May, it gave us confidence to continue up and traded around 0.0017 BTC. It is difficult to determine resistance at this point and seems to be trading around the attempts to break up. Support is built around 0.0016 BTC. 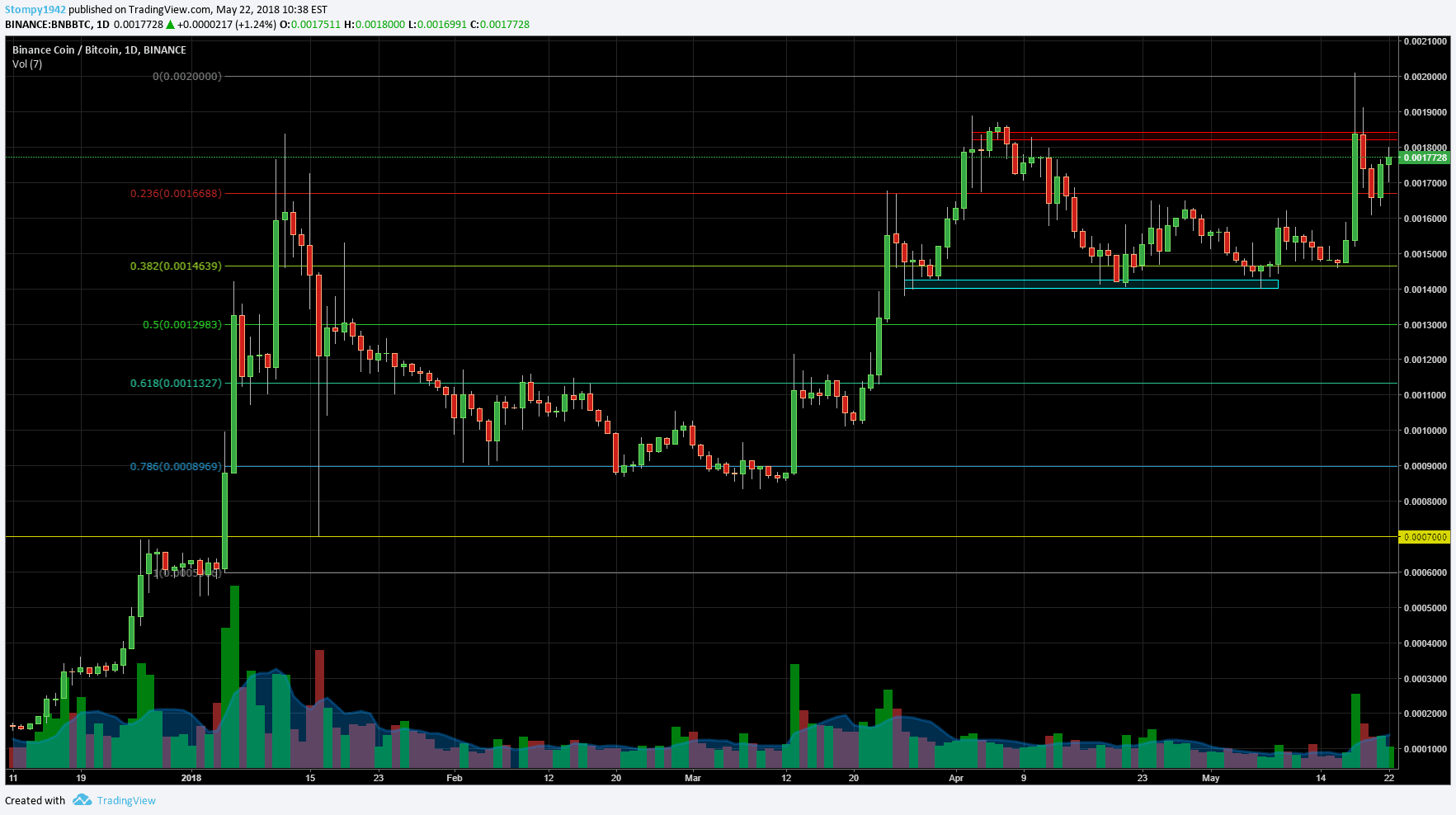 Against the dollar, there seems to be a return to the December resistance levels last year. It traded around $59 with support also sitting in this area and the following support areas are marked in the blue rectangle. Resistance in this range at $68. 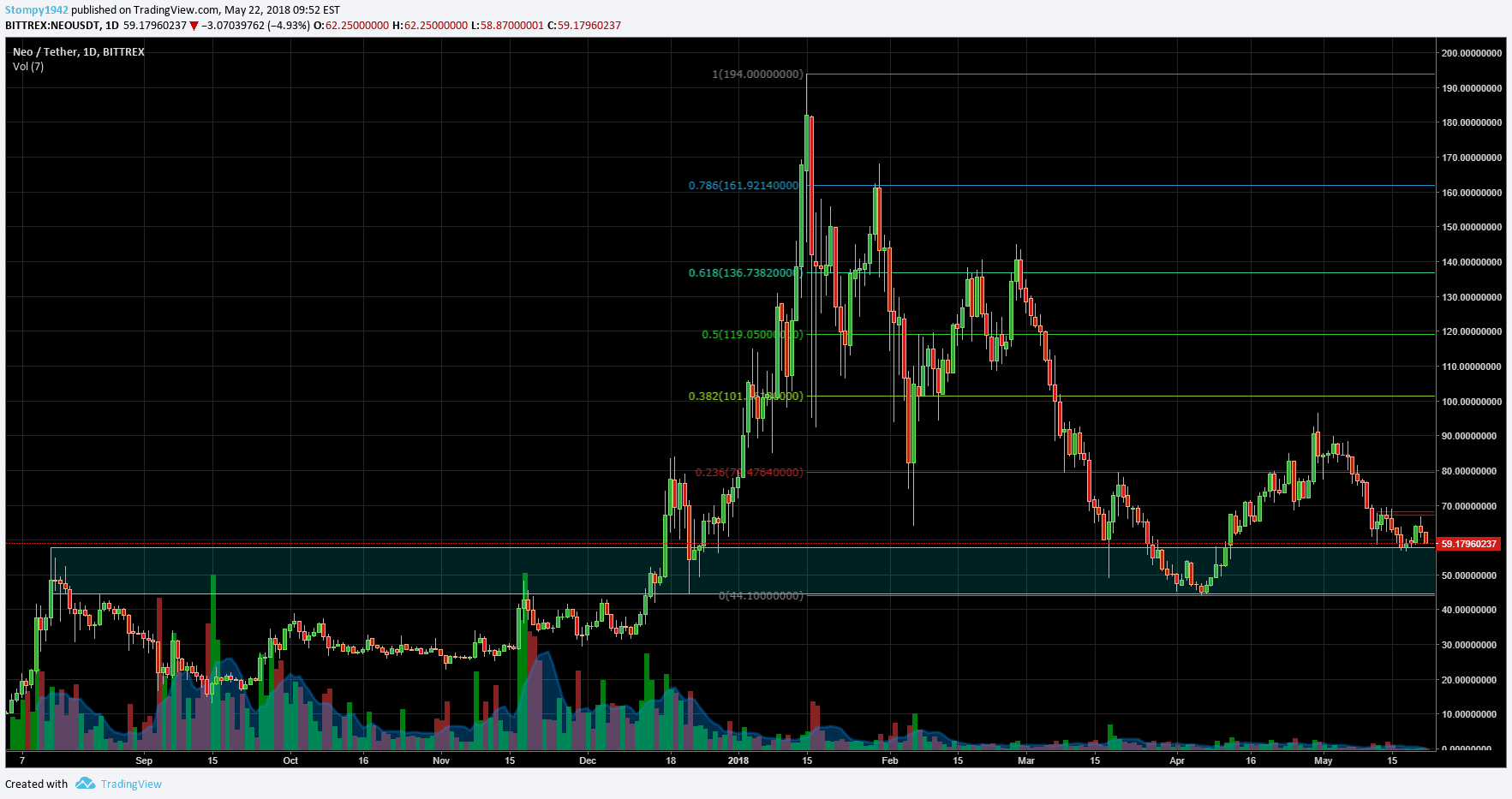 Bitcoin has a downward trend towards the support levels around 0.007 BTC and is trading not far from there. The support we saw in April around 0.0066 BTC is next in line if 0.007 BTC does not hold resistance around 0.0075 BTC. 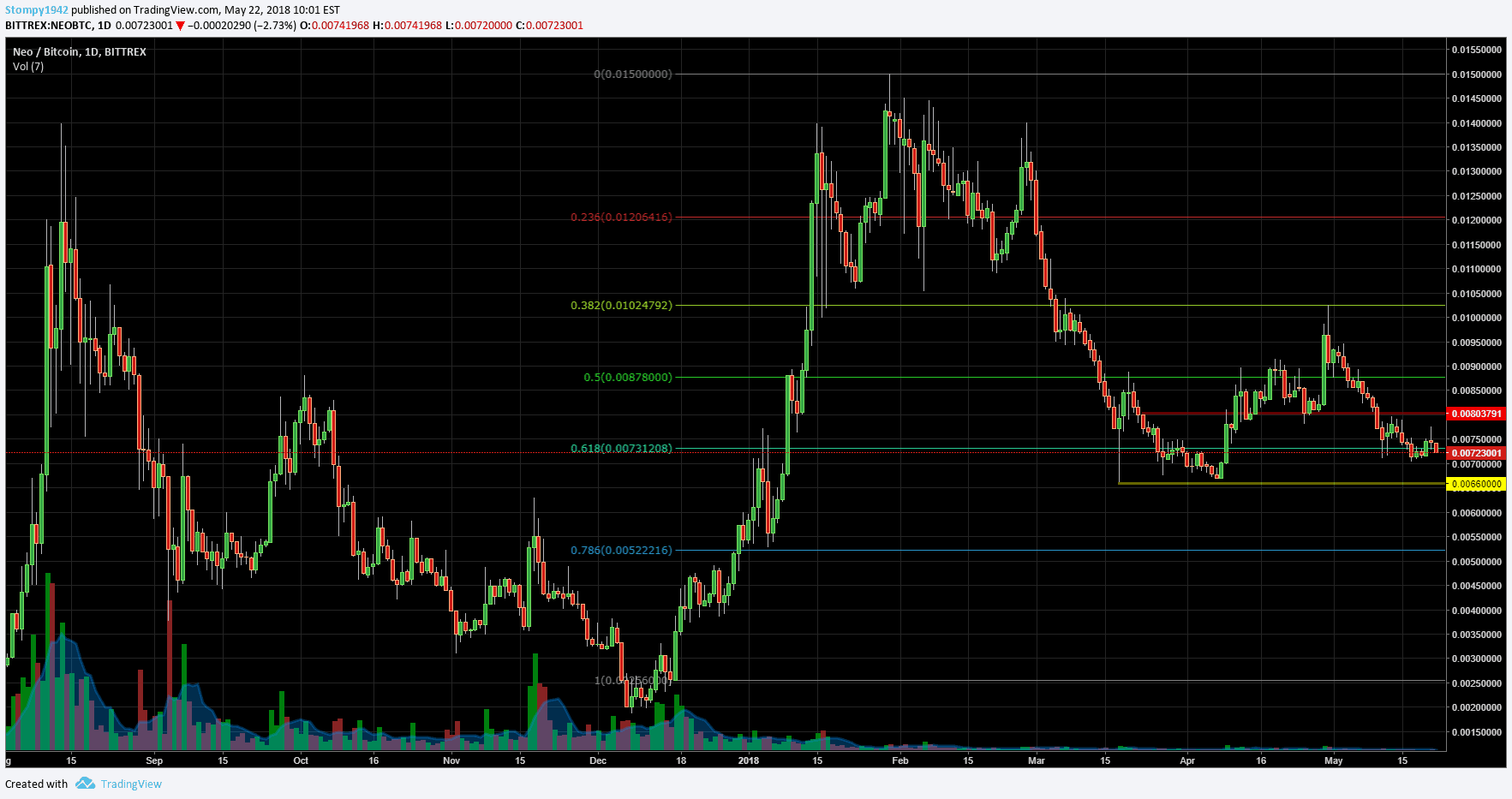 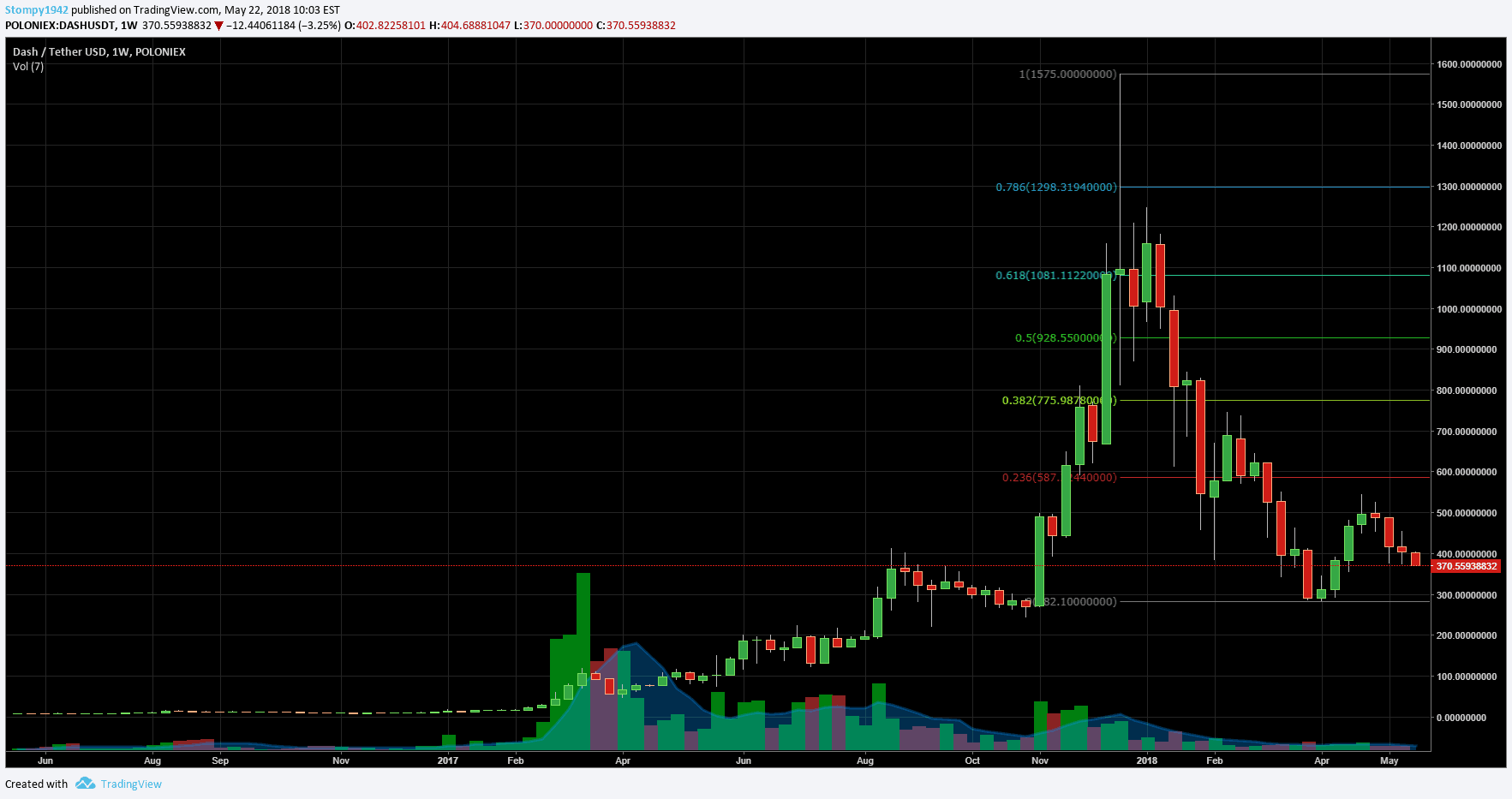 Bitcoin continues a moderate downward trend, and we have already returned to the low levels of support that were marked (green) in previous updates. It traded around 0.045 BTC where both support areas are in this resistance range around 0.05 BTC. 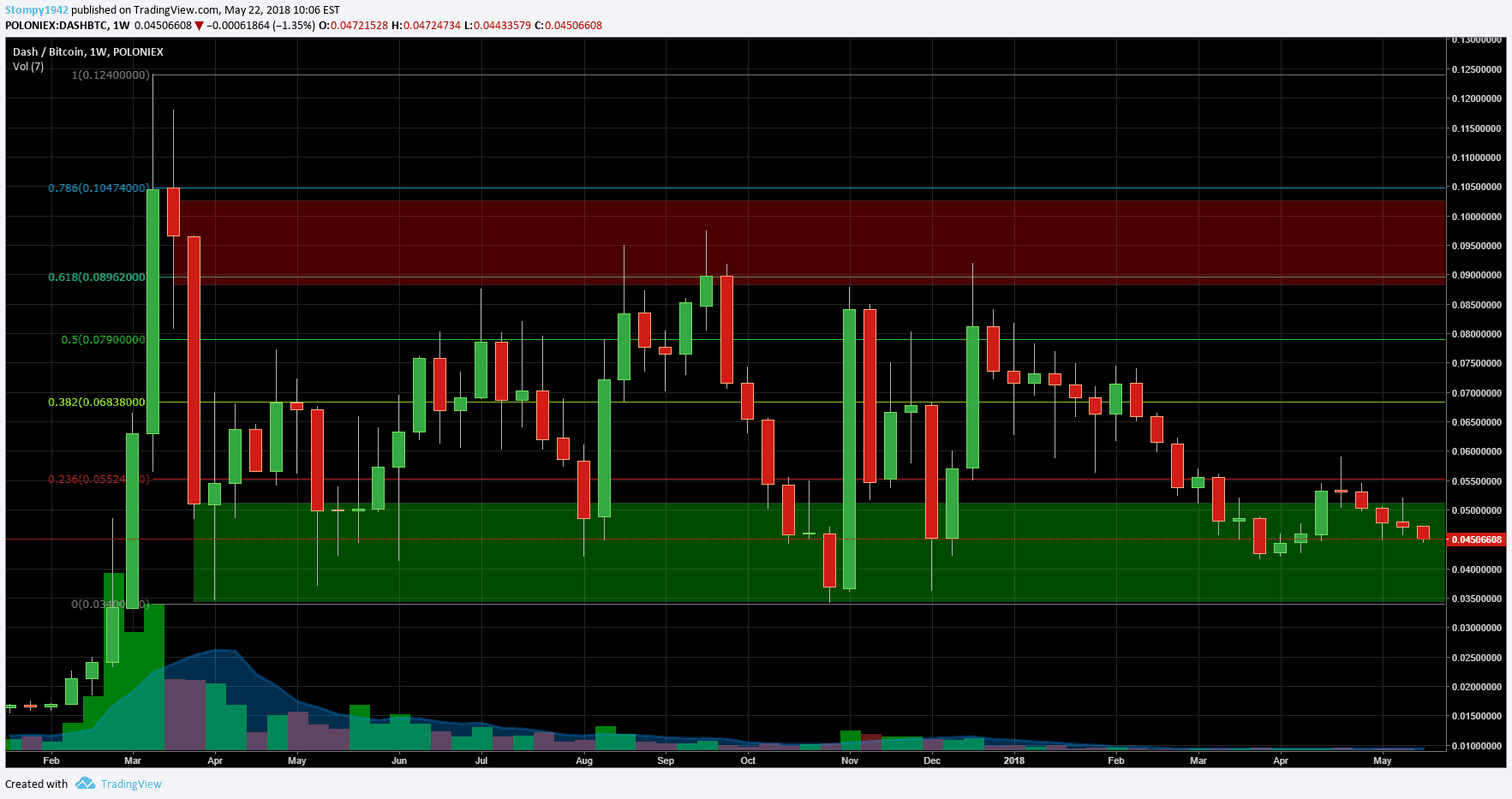