Stabilization: In the past few days, we have been experiencing stabilization around the Bitcoin price. The main reason – a sort of “ceasefire” on the issue of increasing the block size and the adoption of SegWit technology. At the recent Consensus conference held in New York, a number of senior executives from the Bitcoin community tried to form an agreement. Right now, 80-90% seems to support the adoption of SegWit X2 by signal. This does not mean, according to the signal, that Segwit will be adopted with certainty. The agreement says that the miners would adopt Segwit and three months later the network would be updated up to a two mega block size, twice the size defined in the code. As a result, the controversy over the size of the block will be postponed towards the end of 2017 and not on August 1st as most of the market thought it would take place. The Bitcoin rate stabilizes within 2500 – 2700 USD in response. More information about the agreement can be found here. 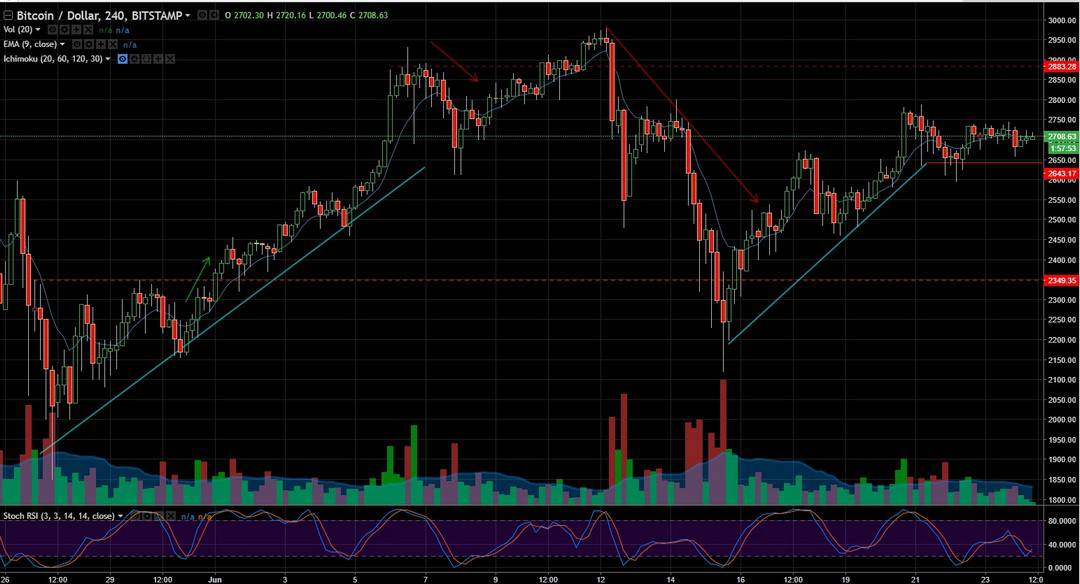 Etherium had broken its support around 0.137 BTC after another week of ICOs on top ETH platform (including Bancor, with a stunning all-time high ICO record of $ 150 million). The last mega ICO, Status, caused the whole Etherium network to become very slow and impossible for transactions to go through. In addition, on the GDAX exchange ETH dived in seconds from $ 319 to 10 cents (!) following a $ 30 million order by someone who held an ETH ICO wallet. Apparently it was an attempt to manipulate the arena. GDAX returned the money to investors who their margin stop orders got executed by the dive. 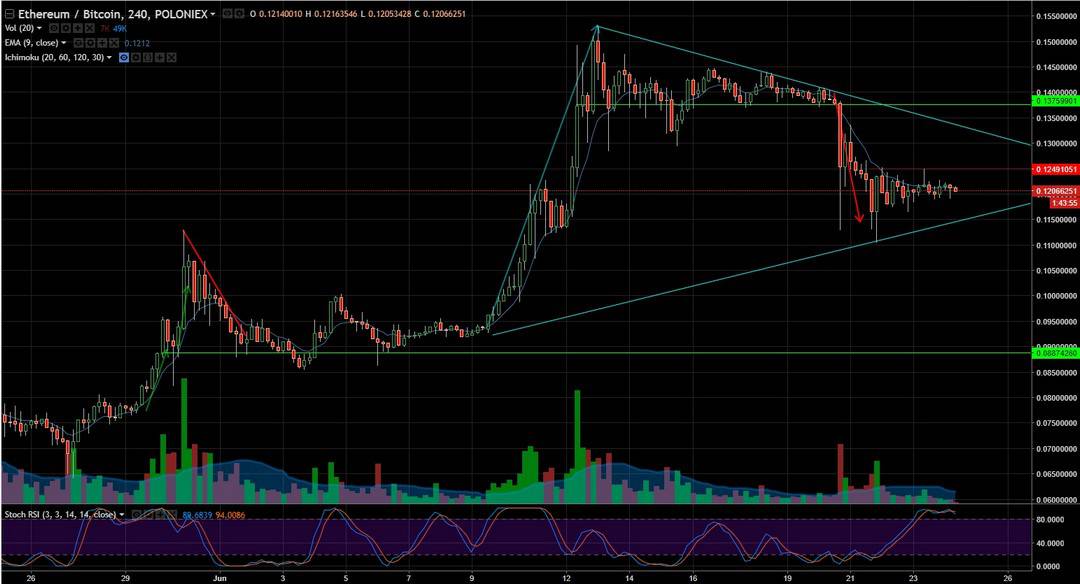 Altcoins Market: The trading volume is rising to huge numbers. BITTREX trading volumes have increased significantly recently, indicating the large amount of money that has entered to Altcoins. This is when the biggest Altcoins exchange POLONIEX is very difficult on adding new coins during recent two years. 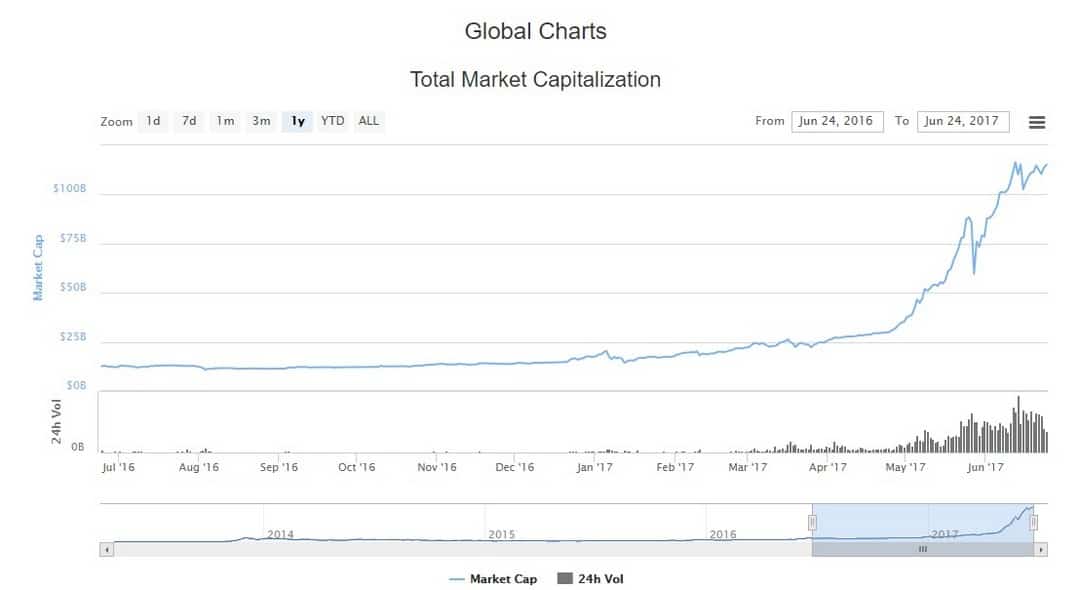 XMR Monero: The BTC price has been steady since the beginning of this year, compared to other altcoins. Monero, a very significant altcoin in Poloniex, serves as a base asset for trading against other altcoins. Same as BTC and ETH. Currently, the price is around 0.018 BTC. If we see a breakout of 0.023 level, we could see a nice pump similar to that of the end of last year. In addition, XMR remained silent during the last alcoin pump so we could see some action soon. 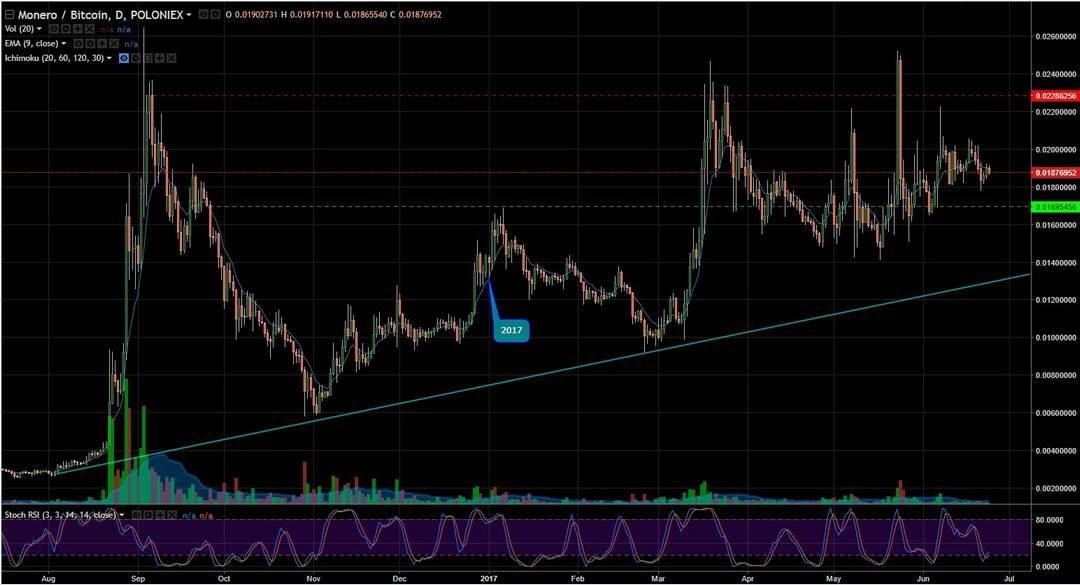 DOGE COIN: Doge is one of the ancient crypto coins. At the moment it looks like it’s in a very interesting situation, on top of support level at the weekly graph, around 110 Satoshi. Next resistance lays around 160 Satoshi. If the support breaks, it might be good to enter a short. 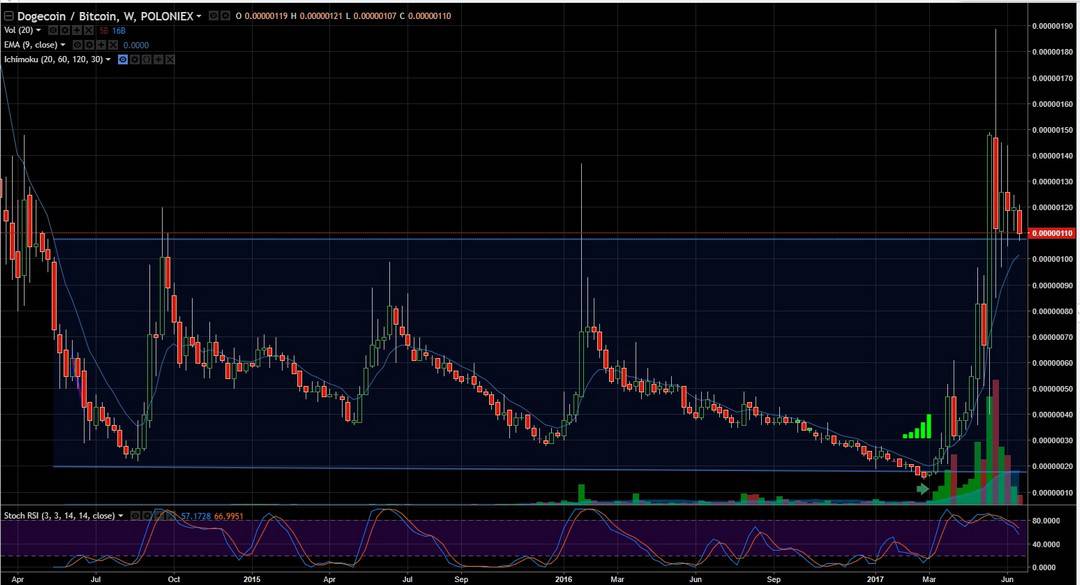 QRL: Following our new featured article reporting an interview with Peter Waterland, the founder of the project, it seems that QRL is in an interesting technical flag point. A break-up of the shape will generate a sharp move towards the all-time high of 0.00098 BTC. Break could be a good sell poing. More information – follow our new article.