After a month of sharp declines, we have finally seen a green week. Although many traders and technical analysts think the bottom of recent correction to stop at $6K, it does not mean that the red days are behind us. Pantera Capital seems to believe that the bear market is over.

During the past week, Binance exchanges abruptly stopped due to an unexpected server upgrade, this took more than 12 hours. There was panic among investors, but the reliable exchange had come back at last.

In the world of the Alts, we had a very positive week, especially among Ethereum Classic, which rose 75% vs the USD. It seems that the forks, the upgrades, and the airdrops are attracting huge interest from investors. Zcash Classic, ZCL this week only had a nice 80% gain, probably the following announcement for a fork expected on February 28th. In this fork,  Bitcoin and ZClassic holders will receive a 1:1 ratio BTCP (Bitcoin Private). BTCP will bring new anonymity level.

Some bad news – BitGrail exchange, was breached this week with about $195 million worth of coins being stolen. This is a good reminder to us of how important it is to have your own wallet and not to risk non-trading coins stored on exchanges. The Crypto Market is a very young market, and we have previously seen more than once, exchanges which got hacked. There have recently been claims that it is possible to increase security by using decentralized exchanges.

This week, the Senate committee held a meeting with Jay Clayton SEC Chairman and Christopher Giancarlo, U.S. Securities and Exchange Commission Chairman, in attendance. One of the main issues discussed by the committee is the classification of digital currencies as commodities, securities, or a combination of both, and what sorts of regulations will result. The committee also raised concerns regarding the lack of disclosure about regulations of ICOs. According to Clayton, only a small minority of ICOs are registered with the Securities Authority, even though the majority of tokens are issued is in compliance with the definition of a security. Both Clayton and Giancarlo agree that regulation in the sector should be proportional and that “we should not go too far.”

Arizona may be the first state in the United States to recognize Bitcoin as a currency, rather than as a commodity. According to a bill introduced in the State, in the future, there will be the accessibility to pay taxes with Crypto. However, it should be noted that opponents of the bill express concern with paying taxes with such a volatile currency.

Daniele Nouy, ​​an ECB chairman for the CNBC, said that regulation of the digital currency market is not a top priority for the bank and that the bank is prepared to take regulation measures as required. A similar approach was made this week by the president of the bank, Mario Draghi, in the European Parliament. Draghi noted, that the launch of futures contracts on the US stock markets could lead European banks to take similar steps, in which case the central bank may increase control over Bitcoin.

Armenia – The State plans to launch a mining center in April. The center is expected to operate at a capacity of 50MW and will be used for the mining of Bitcoin and other cryptos.

South Korea – The petition against government regulation of Bitcoin reached the Supreme Court of Justice this week. The main argument against regulation is that it made the process of trading and holding crypto so complicated that it infringed on the property rights of the buyers and sellers, and the regulation, that was enforced, lacked any legal basis. As of now, the court has decided that it is unconstitutional and regulation measures may be canceled.

In Singapore, the deputy prime minister and chairman of the Monetary Authority of Singapore (MAS), said that Singapore will not ban crypto-trading and also that the authorities were examining the risks of using crypto and how to deal with risks.

Another Asian event that could affect the markets in the near future is the New Year celebrations in China and South Korea.

Experts from the crypto markets including, Coinbase’s CEO Jamie Burke, predict that by 2018, the value of Bitcoin may reach $50K, and the overall value of the Crypto market could reach $1 trillion. The main reasons they predict this are the technical improvements in the network such as the Lighting network, the clarification of nation’s stances on regulation issues, and the launching of additional financial instruments for crypto investments.

On the other hand, analysts at the investment bank, Goldman Sachs, predict that most of the cryptocurrencies may fall or even disappear and that investors should be prepared. The company states that the main reasons for this are transaction processing times, high fees, and security problems.

The British bank, Virgin Money, announced that it would block its customers from buying cryptocurrencies by credit card. The prohibition stems from the fear that customers will not be able to meet their credit-obligations. This announcement comes in light of similar measures that were taken last week by other major banks such as JPMorgan, Bank of America and British bank Lloyds.

Small and medium-sized banks across Europe seem to be taking advantage of the aversion of large banks to increase their client base, with them offering services ranging from easy-to-buy cryptocurrencies with credit cards, to the management of crypto investments. In some banks, like Barclays, they have officially announced that its customers can make any deal involving cryptocurrencies using the bank’s credit cards.

The G20 Forum: One of the topics that will be expected to be discussed in the G20 forum is the regulation issues of cryptocurrencies. This issue was raised, in a letter sent to the ministers expected to attend the forum by the French and German finance ministers. In the letter they expressed their concern, not only about the regulation of the risk has for investors but also about global financial instability, they expressed their concern about the lack of clarity in the sector.

In an interview for Yahoo Finance, Vice president of eBay said that the company would consider accepting crypto as a payment method in the future.

Coinbase is expected to launch a new service that will enable businesses to receive payment through Bitcoin, Bitcoin Cash, Ethereum and Litecoin.

In light of the uncertainty surrounding the project, Tether, the company appears to have started issuing Euro-Tether coins. As of now, it seems that the company has already created about 71 million coins.

A very positive week. The support around $8,000 areas continues to hold on. Next resistance lies at $10K. Bear market is still here, and we can declare a bull market once we break around $ 13K resistance. Support is in the $8K range in the short term. 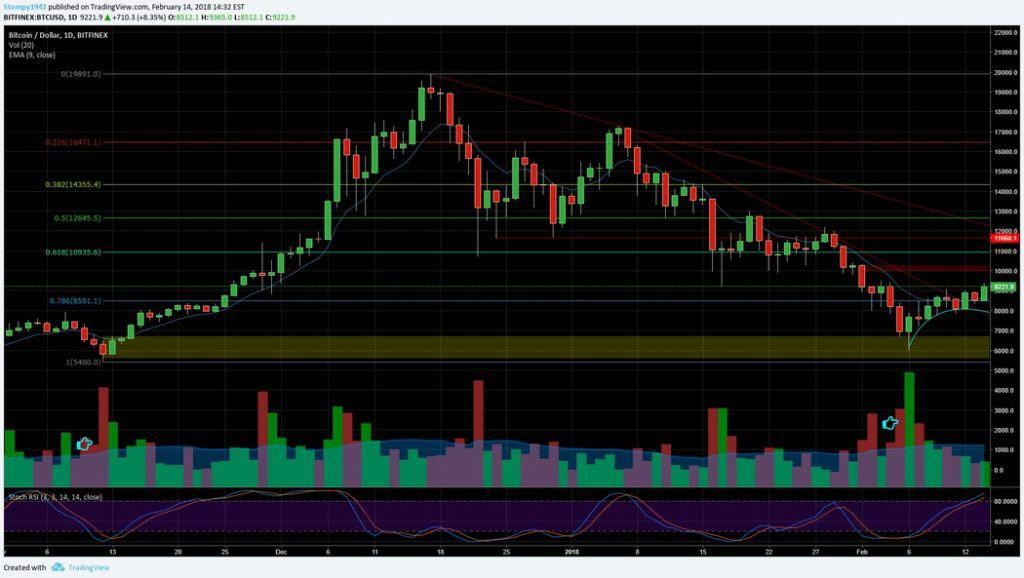 Against the dollar, Ethereum returned to support areas around $750- $850 after the break of support levels around $1K area, which eventually turned into resistance. 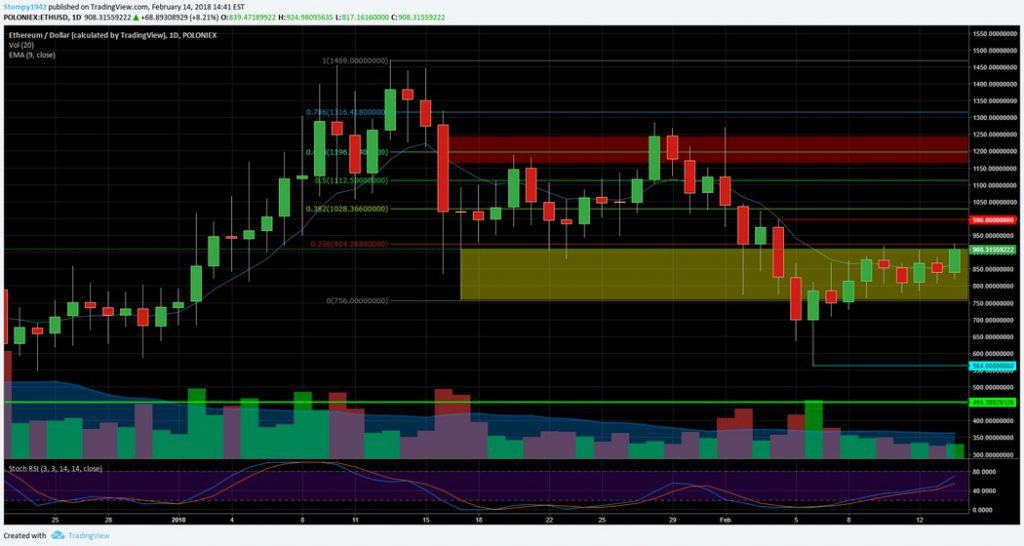 Against Bitcoin – it was a relatively stable week. Strong support around 0.1BTC but has weakened slightly, yet the price still rests in these areas. Support is set to 0.095BTC in the short term. 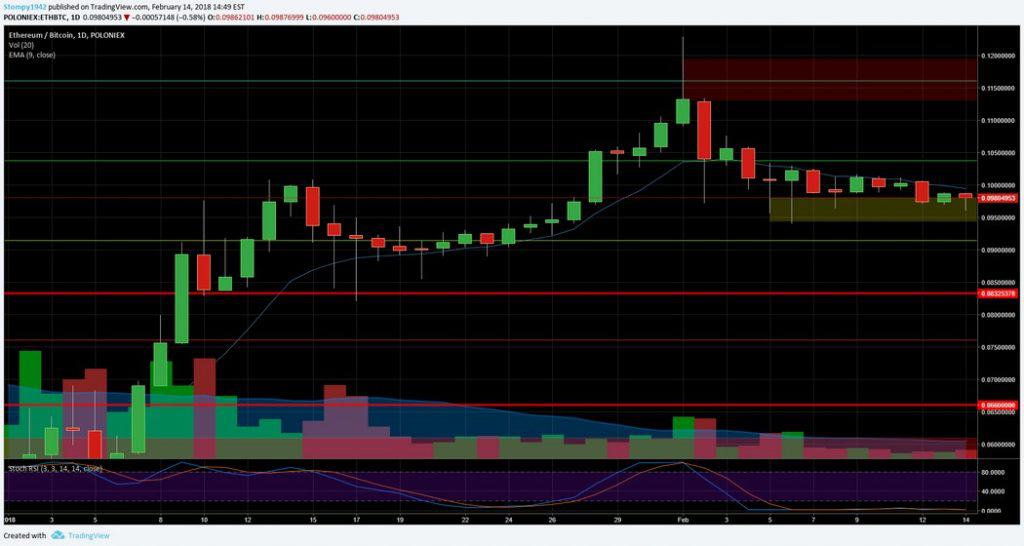 Against the dollar, the price went down since the beginning of January where the ATH was $265. The correction was extremely sharp, with a low at $56, but from there ZCL returned to the $80 zones. After stabilization, the resistance of $100 was breached and the price jumped to $180 where the resistance areas currently lie. Support is near at around $ 140. 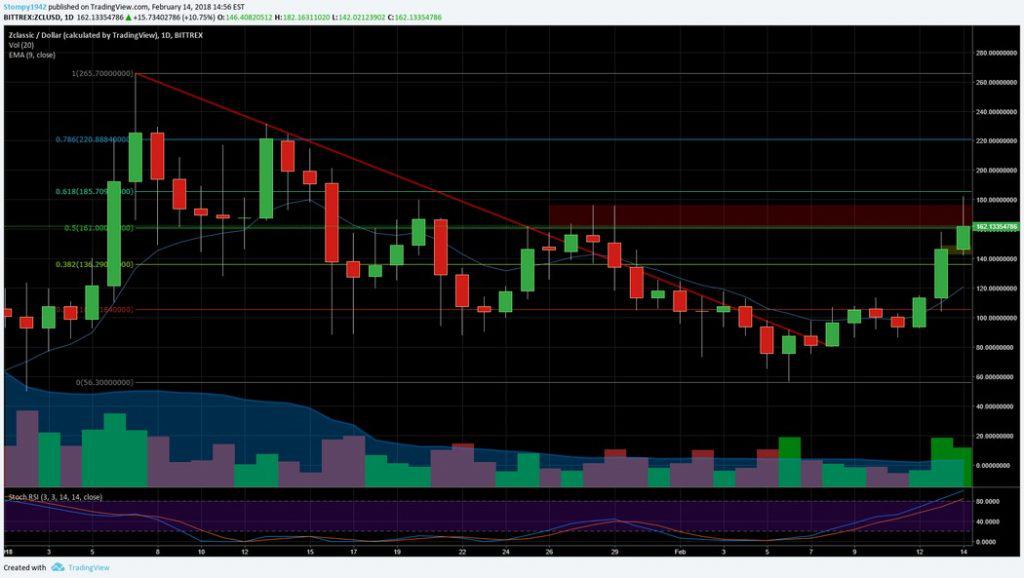 Against Bitcoin – The resistance zones of 0.015BTC were breached and the price jumped up to 0.0194BTC. Support is currently a bit far, around the previous resistance 0.015BTC. As we approach the fork on the 28th we expect heavy trading. 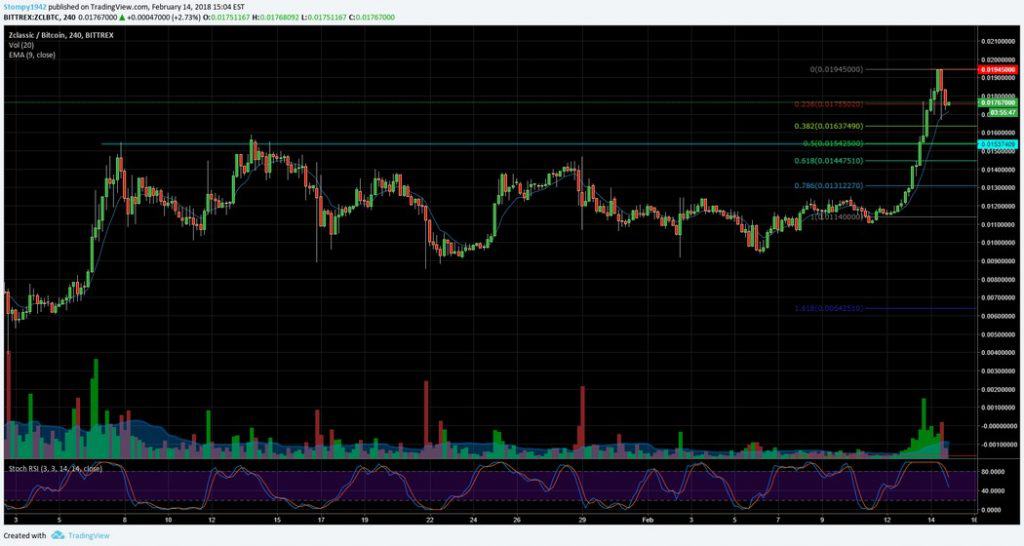 Against the dollar, Ripple got supported around 60 cents and experienced a quick return to the $1 zones. Resistance lies at $1.20, Support at $0.80. 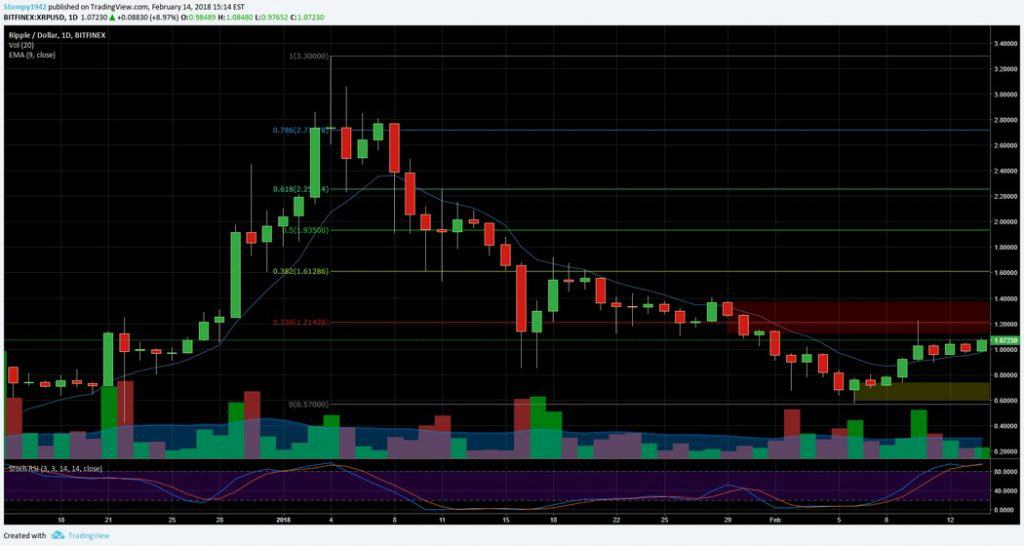 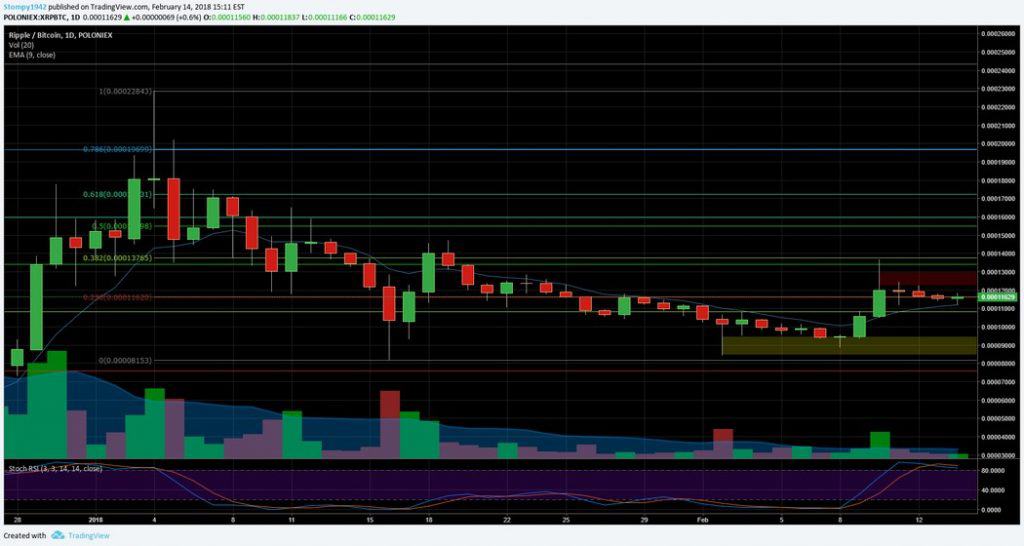 Against the dollar there is no trade of SIA market, at least on the leading exchanges. Trading against Bitcoin has been fairly stable over the past week, around 270 Satoshi, after rising in early January to the 470 Satoshi levels, and then falling to 240 Satoshi areas. The price seems attracting, resistance lies in the 300 Satoshi area. 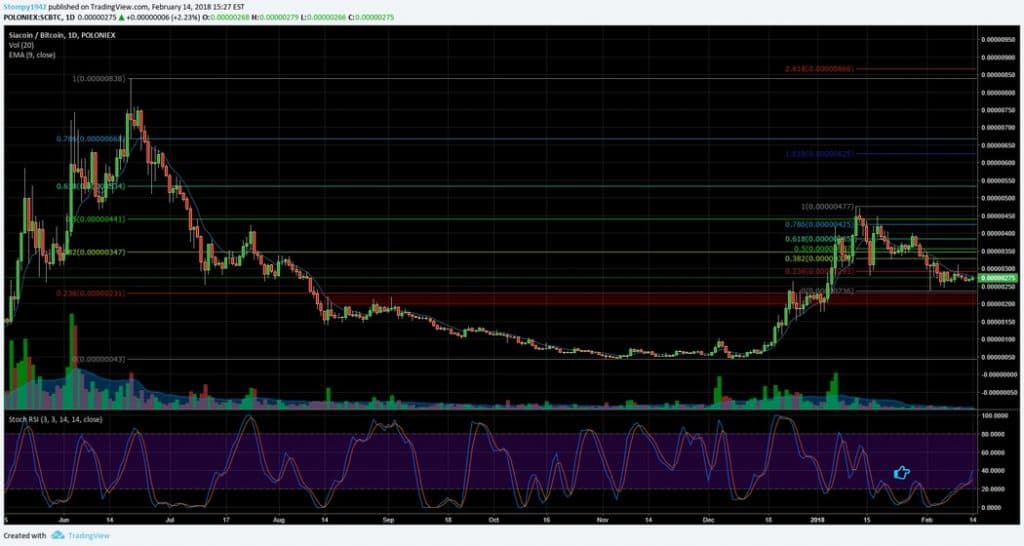