Well…the correction came. After an entire week of declines in Bitcoin’s price, last Friday its value reached $11K, but then support and demand came and it eventually ended (as it seems now). Alongside Bitcoin, the value of the Alts also fell against the US dollar. Yet surprisingly there were some altcoins that gained hundreds of percentages at the same time. All this is happening following the media hype surrounding Bitcoin, Crypto and blockchain technology. To the beginners, who suffered a correction for the first time, we want to say “welcome to Crypto” and the volatility world.

In other subject. Some new forks around the Bitcoin network will take place during these days. Due to a lot of scammers organizing these forks, we recommend that before extracting coins received from the forks, do a deep research. Follow relevant groups or forums to get updates regarding it, try to find out if this fork is sort of fraud. Usually malicious forks might create wallets and install malicious software at the same time.

In the past 24 hours, we have seen a correction in the value of the Alts versus Bitcoin, with the average correction being about 30%. Along with the Alts, Bitcoin showed a 40% correction this week. This correction was expected following the insane parabolic increase that have not stopped until recently. If you look at the 2017 chart we can see that similar corrections took place this year: but this is the biggest correction we saw throughout 2017. And it happens right at Christmas and the New Year. Could this perhaps be some cashouts after very profitable year? 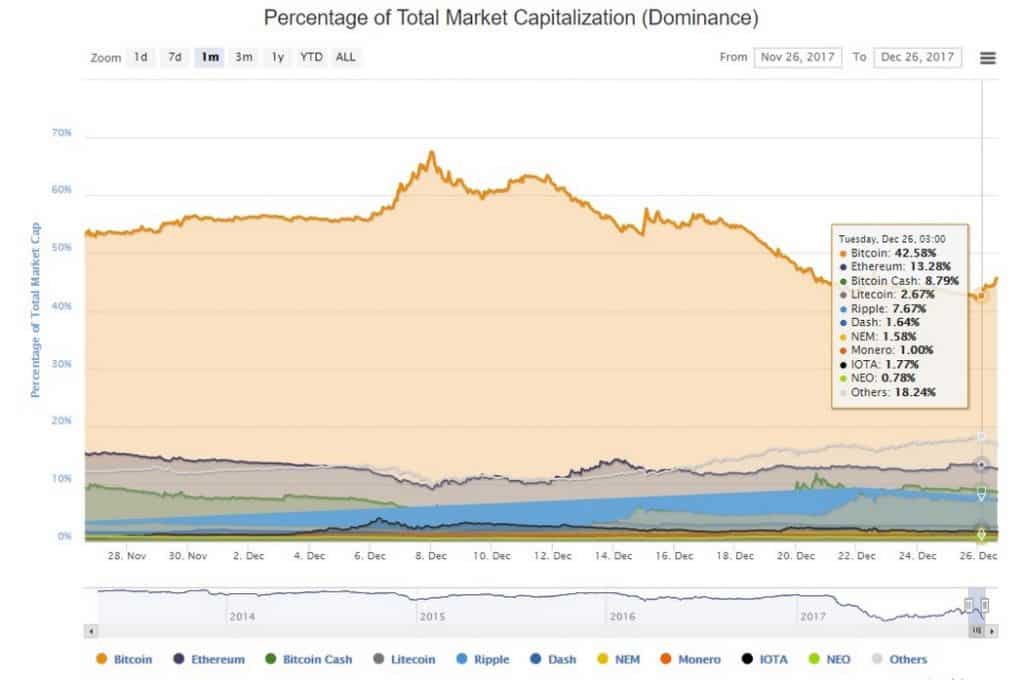 Also, keep in mind that as the value increases rapidly, the fluctuations also increases, in even larger percentages.

In conclusion, we can say that the past year has been a great year for the crypto market and for Bitcoin in particular. Breaking new records, both in terms of market cap of $630 billion and in terms of daily trading volume of around $50 billion a day. We expect the next year to be very interesting; both in terms of forming regulations on a global level and in terms of the development of new blockchain technologies. In addition, after a slight decline in the ICO investments, investors are showing renewed interest, and there has been some successful ICOs recently, such as the ZEN Protocol, which raised 100% of its hard cap.

Youbit, a South Korean Bitcoin change has declared bankruptcy in the wake of a cyber attack that stole about 17% of its Bitcoins. This was the second attack the moneychanger had experienced, the previous one was in April.

Charlie Lee, the founder of Litecoin, announced that he had sold all his Litecoins. He said that the main reason for this was a conflict of interests, since his tweets have an acute effect on the price of the Litecoin.

The President of Belarus signed an order which stated that benefits and tax exemption will be granted to companies that work with smart contracts, crypto-traders, and mining of cryptocurrencies for a period of five years. The purpose of this step is to stimulate and encourage the development and adoption of innovative technologies, especially Blockchain in the country.

South Korea seems to be tightening a moderate regulatory line over the trading of crypto. The financial regulator (FSS) has announced that it does not view cryptocurrencies as “money,” and therefore does not intend to add additional regulation to trading these coins beyond the rules they proposed last week. The FSS governor also said that their only role of the regulator in the crypto currency space is to warn investors about the dangers of investing and trading.

More in Asia, the Philippine Central Bank, announced that it intends to implement regulation for Bitcoin. The Governor of the Bank, announced that he did not intend to regulate trading of various crypto-currencies at this stage, and that the emphasis was now placed on the conversion of crypto coins to FIAT.

On the other side of the world, it appears that in the US, crypto traders will be forced to pay capital gains tax on their profits from short-term crypto investments.

In the Bitcoin sector

The higher the use of the Bitcoin network, the greater the expectations from the LN network, which tested successful network transactions this month. The implementation of the network on the Bitcoin Blockchain is expected to significantly reduce the high fees and the time of execution of transactions. In regards to Bitcoin, the question arises as to whether the Segwit2 update was implemented. An interesting question raised in the headlines this week: did terrorist organizations have an impact on the recent bull run of Bitcoin, as well as how does the crypto market affect terrorist organizations?

The hype surrounding the opening of futures trading on Bitcoin seems to be in a decline. This cutback is seen by the decreasing number of futures sold: Futures for January – 1,583 contracts were sold, but February and March futures – less than 200 were sold.

Often the question is asked: Is it too late to invest in Bitcoin? Peter Schiff, the analyst who predicted the 2008 sub-prime crash, says “yes,” and that investors who enter at this point may “lose everything”. Morgan Stanley, also warns that the true value of Bitcoin is zero.

On the other hand, with repeated claims that Bitcoin is nothing more than a speculative bubble, Tom Lee, head of research at Fundstrat, stated that the decrease in Bitcoin’s price last week is a “healthy” correction. In addition, Goldman Sachs is changing its approach, and plans to launch a trading desk for digital currencies. The launch of the desk is scheduled to take place by July 2018.

According to a survey conducted in the UK, one-third of the Y generation will invest in crypto by the end of 2018. On the other hand, with young people’s sympathy and confidence in crypto coins, about 92% of respondents over the age of 65 believe that banks are more reliable than crypto-coins.

Finally, the Ministry of Finance and the Bank of Israel are considering issuing the digital shekel, a digital coin whose value will reflect the physical shekel. The digital shekel is expected to be stored in a wallet on a mobile phone, and its use is expected to reduce commissions and execution time of transactions, plus allow more stringent supervision by the tax authorities.

After we saw the all-time price of Bitcoin around the $20k, there was a sharp correction to $11K in one week. Demands around the $13K resulted in an end to the sharp declines and stabilization. In the past 24 hours, Bitcoin’s price has risen to the $16k range. It seems to be optimistic but also dangerous. The resistance levels are around $20K, but these levels have plenty of room to play with and volatility is expected. The market needs to gain more support at $14K-16K to move on, and right now it’s too early to say that the correction we’ve seen signifies a change in trend. 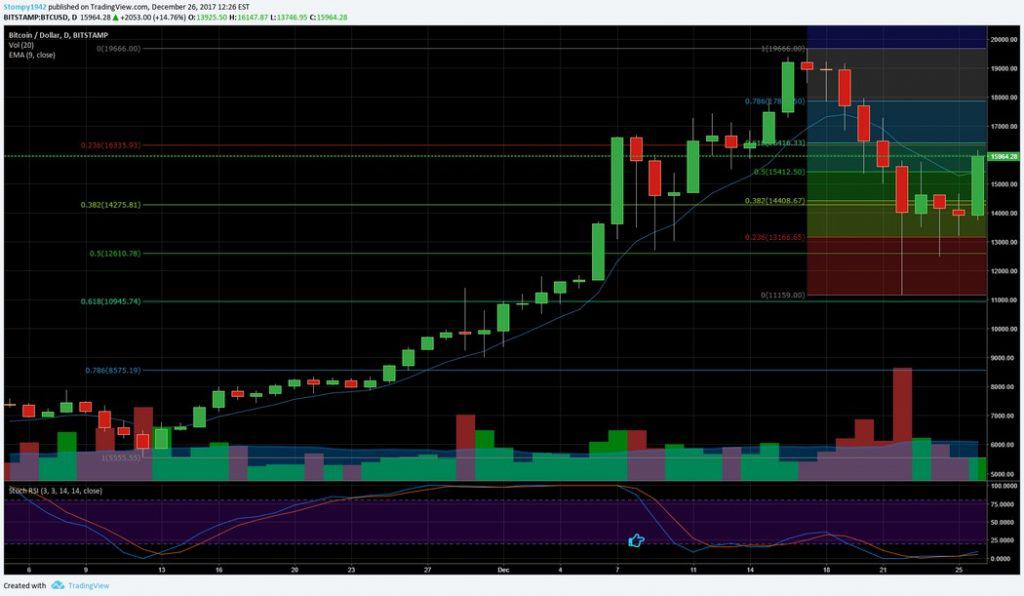 Against the dollar – a sharp correction brought its price to about $520, and from there, the price began to climb with strong support around $600. At the moment, there is trading around $700 and there seems to be a positive trend. 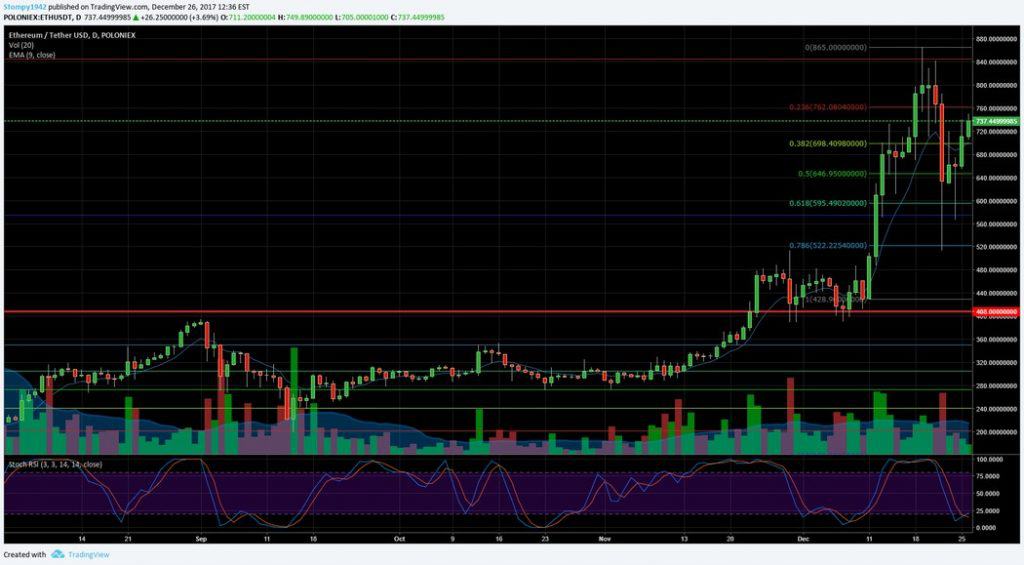 Against Bitcoin – a sustained rise since the beginning of December, with resistance around 0.052BTC And strong support around 0.04BTC. 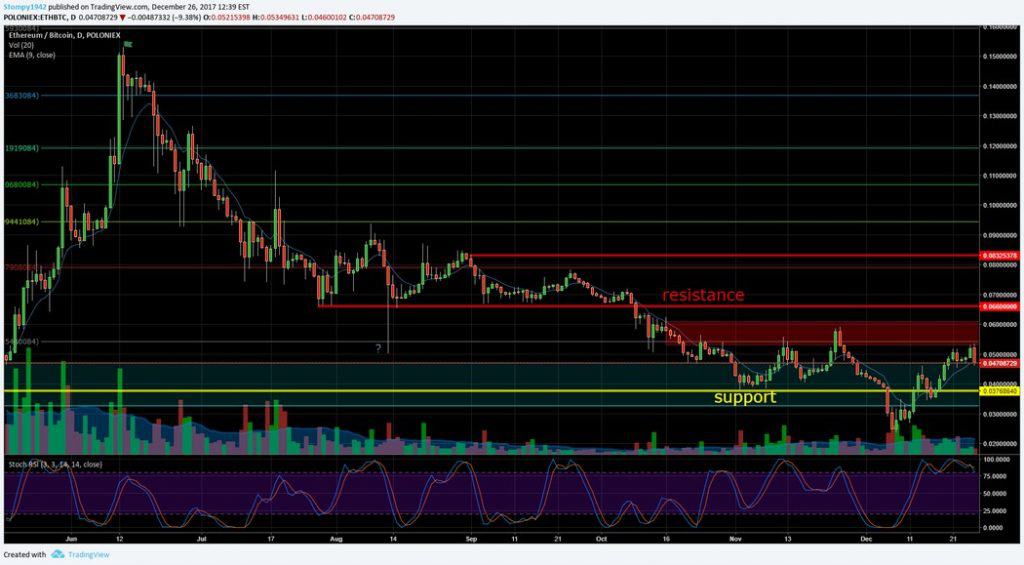 Against the dollar: Another week of trading in the GDAX led to a very sharp rise in the price leading to an all-time high at $4,200 per one BCash, and in some of the markets even more. Immediately following the sharp and rapid rise, an abrupt decline fell to $1800, and then stabilized over $2000. Support lies around $2,400. 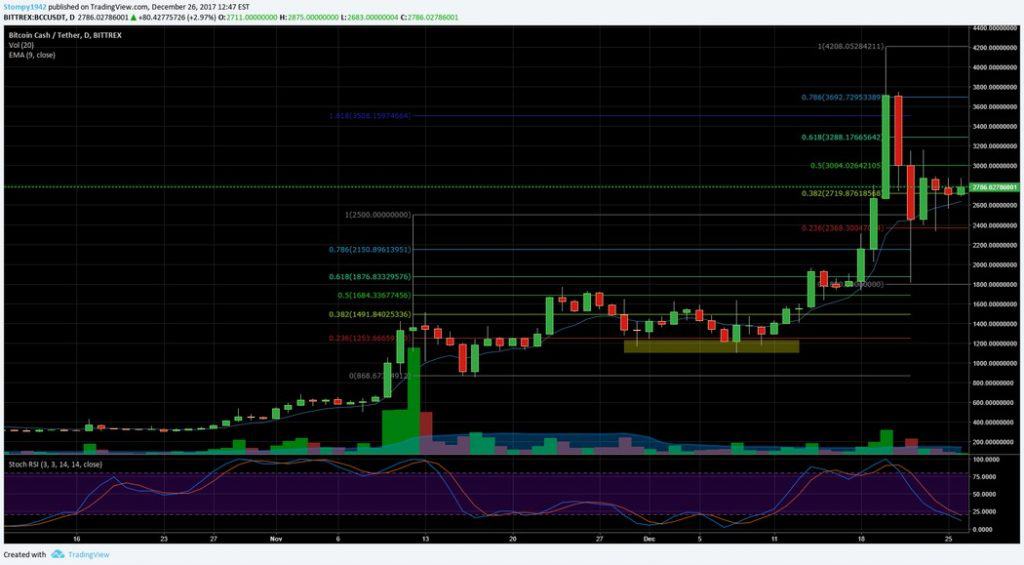 Against Bitcoin: We saw a steep and rapid increase to 0.29BTC, and then a correction to 0.16BTC. Traded around 0.179BTC with support at 0.016 BTC. Can BCash’s momentum continue? It seems that the high fees in Bitcoin contribute to the growth of Bitcoin Cash, which may be perceived as an alternative to some.

Another interesting statistic that we noticed was that the holders of Bitcoin who hold the two coins before the fork in August were less affected by the fluctuations, dollarwise. 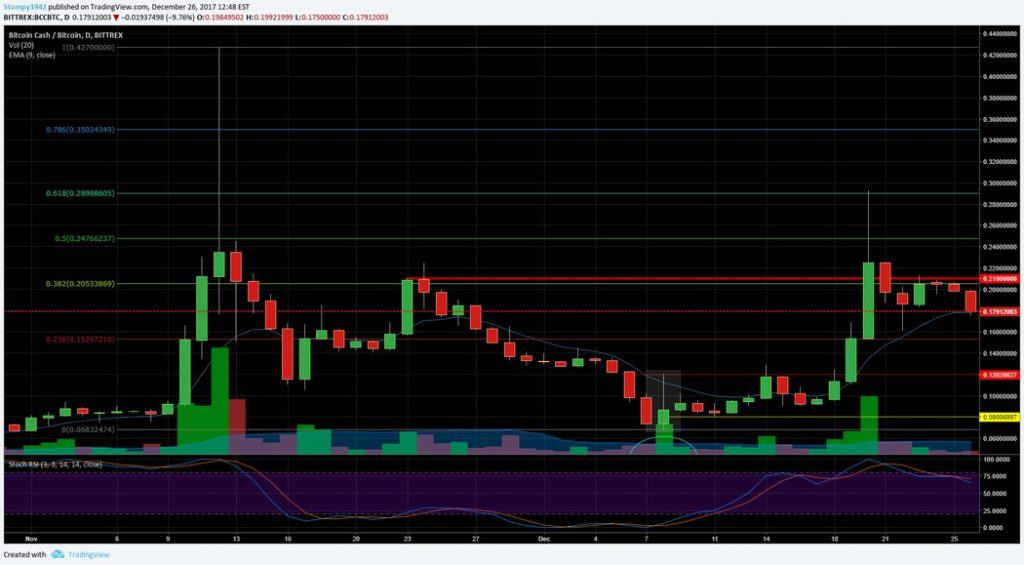 Against the dollar: After climbing to a peak of $370, a sharp correction took place, and the price of Litecoin reached $150 in the BitFinex market. Traded around $270, with support around $240. It seems that the trend is still up. 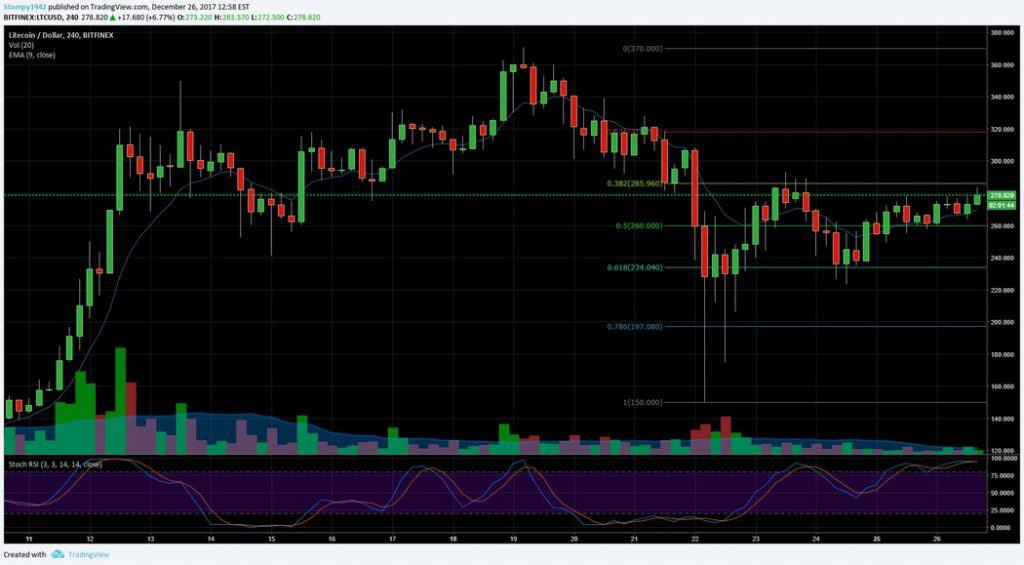 Against Bitcoin: We saw a sharp rally that met resistance around 0.02BTC. As we can see from previous graphs, there have been areas of resistance in recent months, and if these areas break out, it will be possible to continue to new heights. Support lies around 0.015BTC and strong resistance in the 0.02 BTC area. 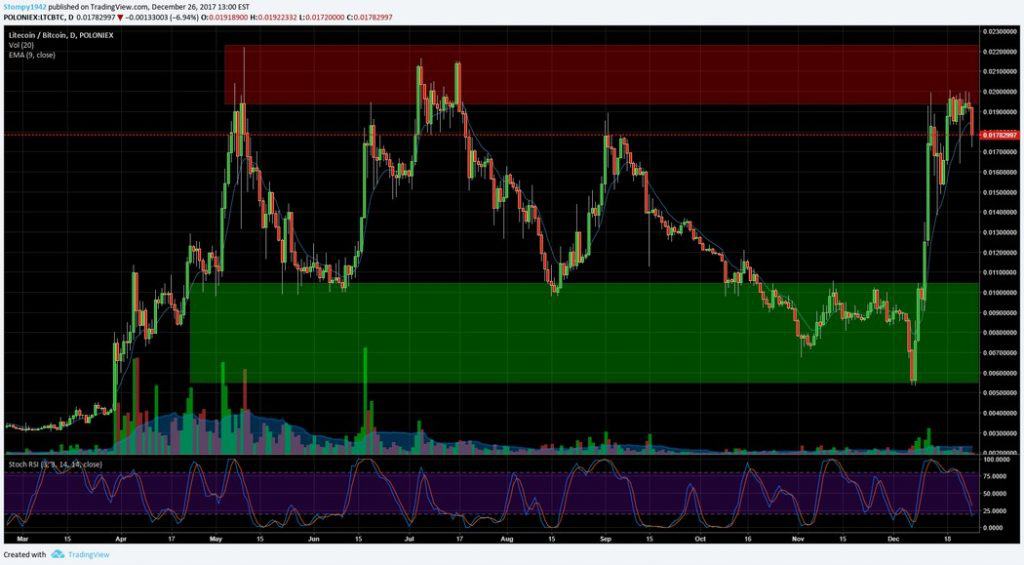 Against the dollar: A rally stalled around $1,575, followed by, a correction down to $800. After the correction, the rate stabilized around $1100 where it is currently traded, we see support within these areas. 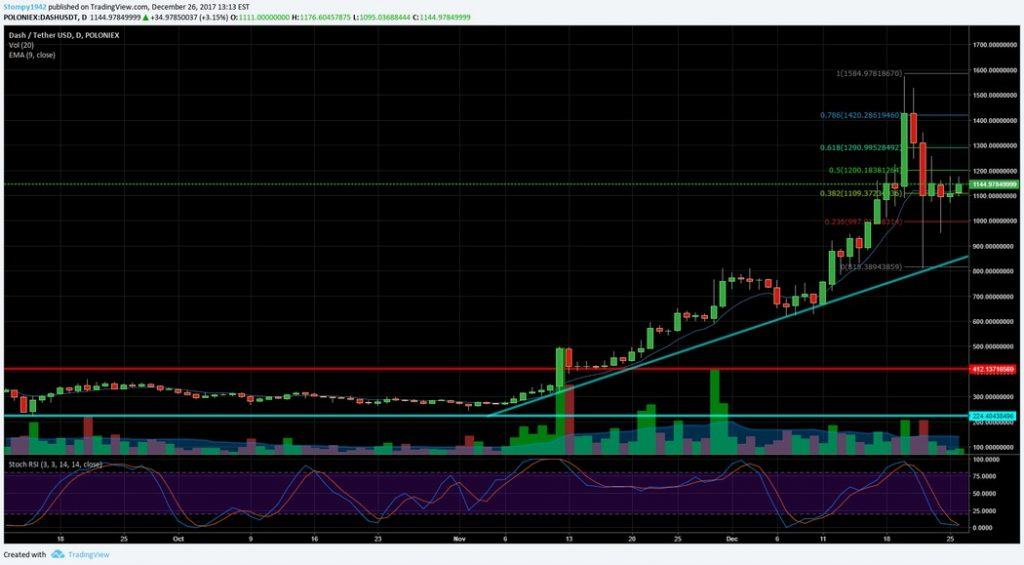 Against Bitcoin: In the weekly chart, we can see that despite the volatility of the past year, there has been very strong support (floor of accumulation) around 0.034BTC level. Support is 3 times higher than the support in 2016, which was around 0.001BTC. This is an impressive figure that indicates stable and continuous growth. For the short term support lies around 0.06BTC and resistance lies around 0.09BTC. 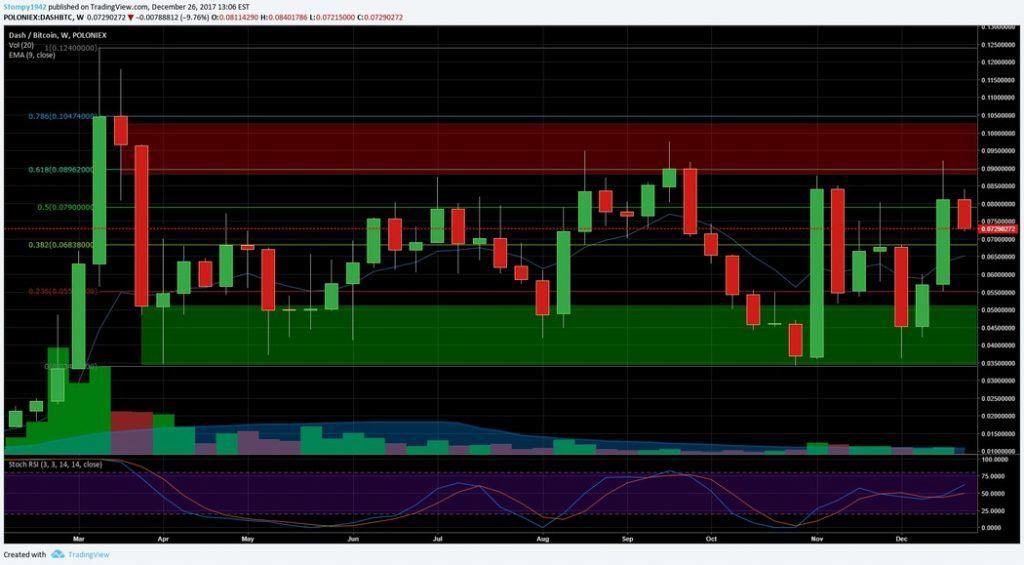