The market is celebrating in green, with Bitcoin itself rising 15% this past week. At the time of writing, the market cap is $423 billion and Bitcoin’s dominance against the altcoins continues its downward trend, staying with a 37% dominance. It seems like new money entering the market is buying Bitcoin in order to take advantage of the volatility and the fast profit in the alternative coins market.

Although, keep in mind that the market is still far from its highest peak and the two leading currencies, Bitcoin and Ethereum, are still much lower than their ATH. Another thing that should be taken into account, is the possibility for a correction after these sharp increases with volatility  expected. In total, despite the regulation and rumors around the U.S TAX DAY (on 17th April), another positive week for the crypto market could be summed up.

For newcomers or those who have forgotten, here are some tips for trading cryptos:

– The behavior of cryptocurrencies is very different from traditional financial markets and one should not be mislead.

– Make sure you prepare a strategy before you enter into a deal.

Learn the market including the various currencies and remember that trading is measured against Bitcoin, not against the dollar.

– Set a target for a maximum loss, which you are willing to stand for (STOP LOSS) and a profit goal which you want to reach. Remember that greed does not always pay off.

Our investment recommendation of the week is – take the time and invest in studying the markets before rushing in to trade.

Investors Are Increasingly Choosing Bitcoin Over Gold: Investors are now choosing bitcoin over gold as a long-term investment, said Pete Thomas, vice president of Zaner Precious Metals in an interview with CNBC.

Bitcoin Going Mainstream In Las Vegas: Some billboards and advertisements were spotted in Las Vegas by a user on Reddit. Also, some users said that casinos were now accepting bitcoin.

WikiLeaks Calls for Coinbase Blockade After Account Ban By The Exchange: Coinbase has suspended Wikileak’s line of merchandise, the Wiki Leaks Shop. Now, Wikileaks is calling for a boycott of Coinbase.

Amazon Thinks to Use Bitcoin in Data Marketplace: Amazon has endorsed a patent that claims will improve customer service using bitcoin technology.

Binance Addition of USD/EUR Trading Pairs Means More Action For Crypto: Binance, one of the largest crypto exchanges in the world, has added more USD and EUR trading pairs for cryptocurrencies.

The gains continue, trading around $9,200, not far from the resistance zone marked in the white rectangle. In the last 24 hours we have seen a breakout of resistance zone around $9300 and from there it might proceed up to $10,000 area. Support in this range is around $8500. 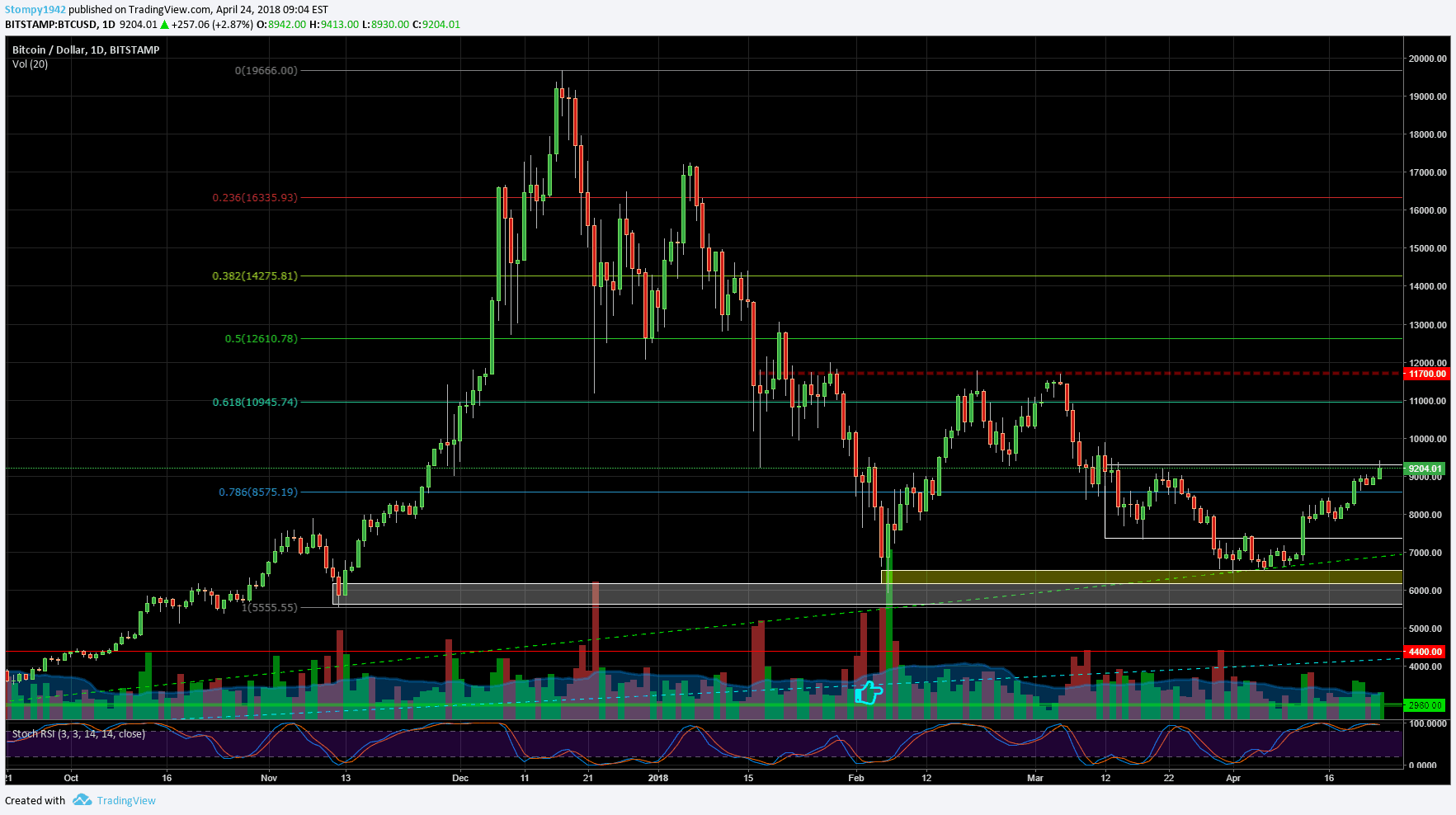 Against the dollar it was a 35% increase in the past week. Traded around $690, resistance at $700 – $750 and from there will be able to go back up. It should be taken into account that we have not yet seen a correction this week. Support is built around $600. 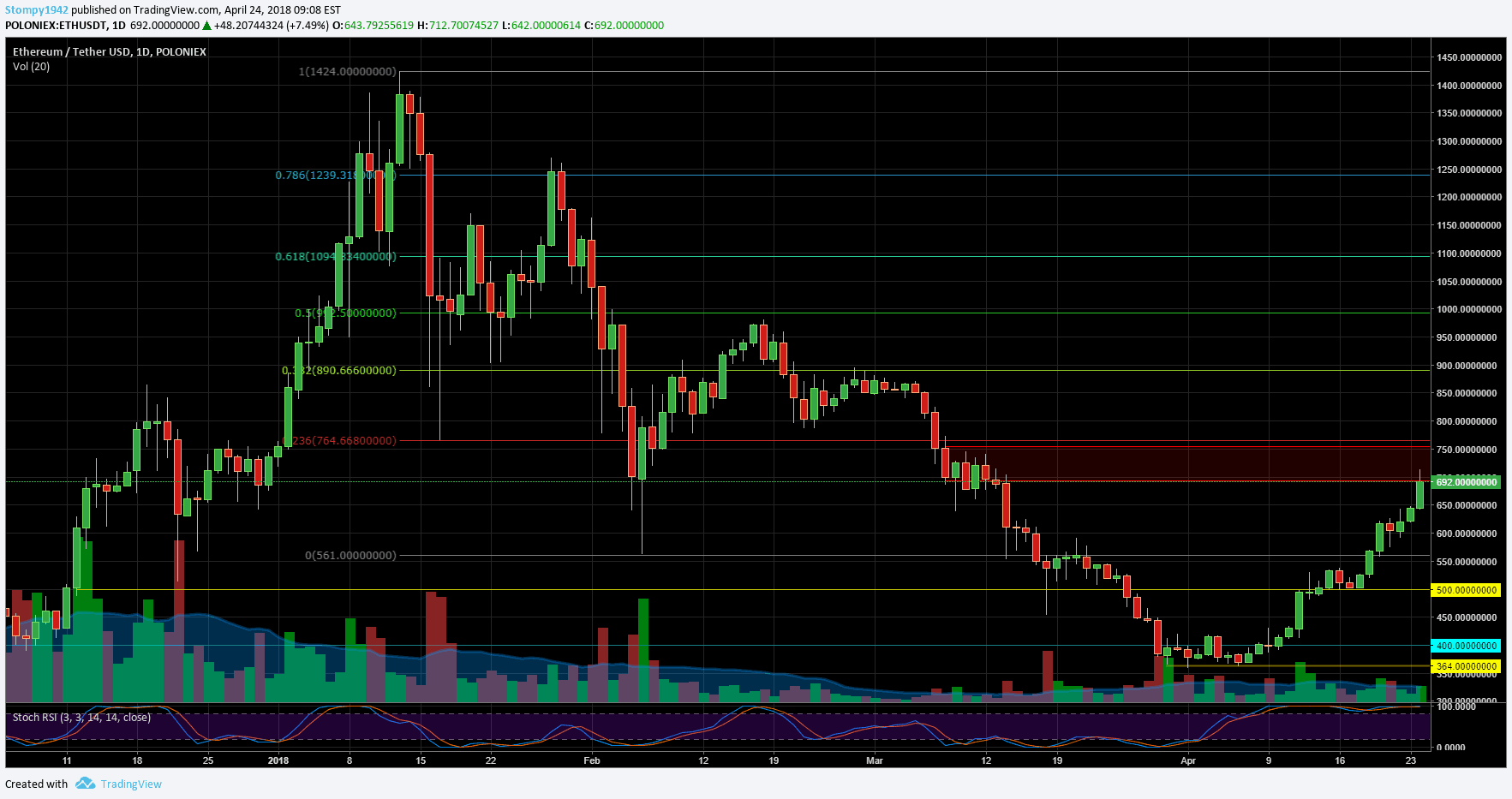 Against Bitcoin, the upward trend continues here and there, with the FOMO correction not having reached yet. The Peak of the week was at around 0.074 BTC. Support around 0.066 BTC. Based on past experience, resistance in the graph appears in these areas. 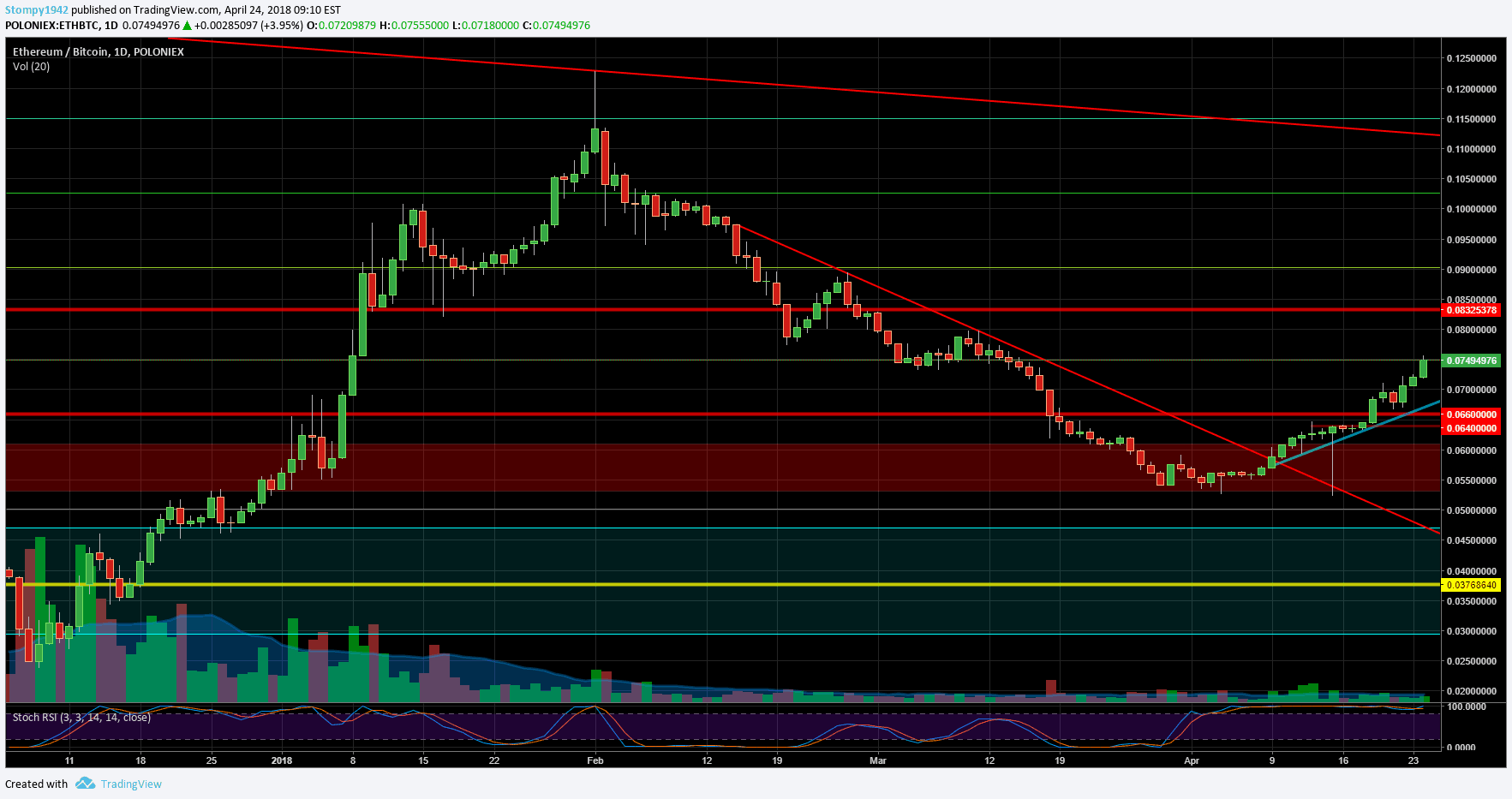 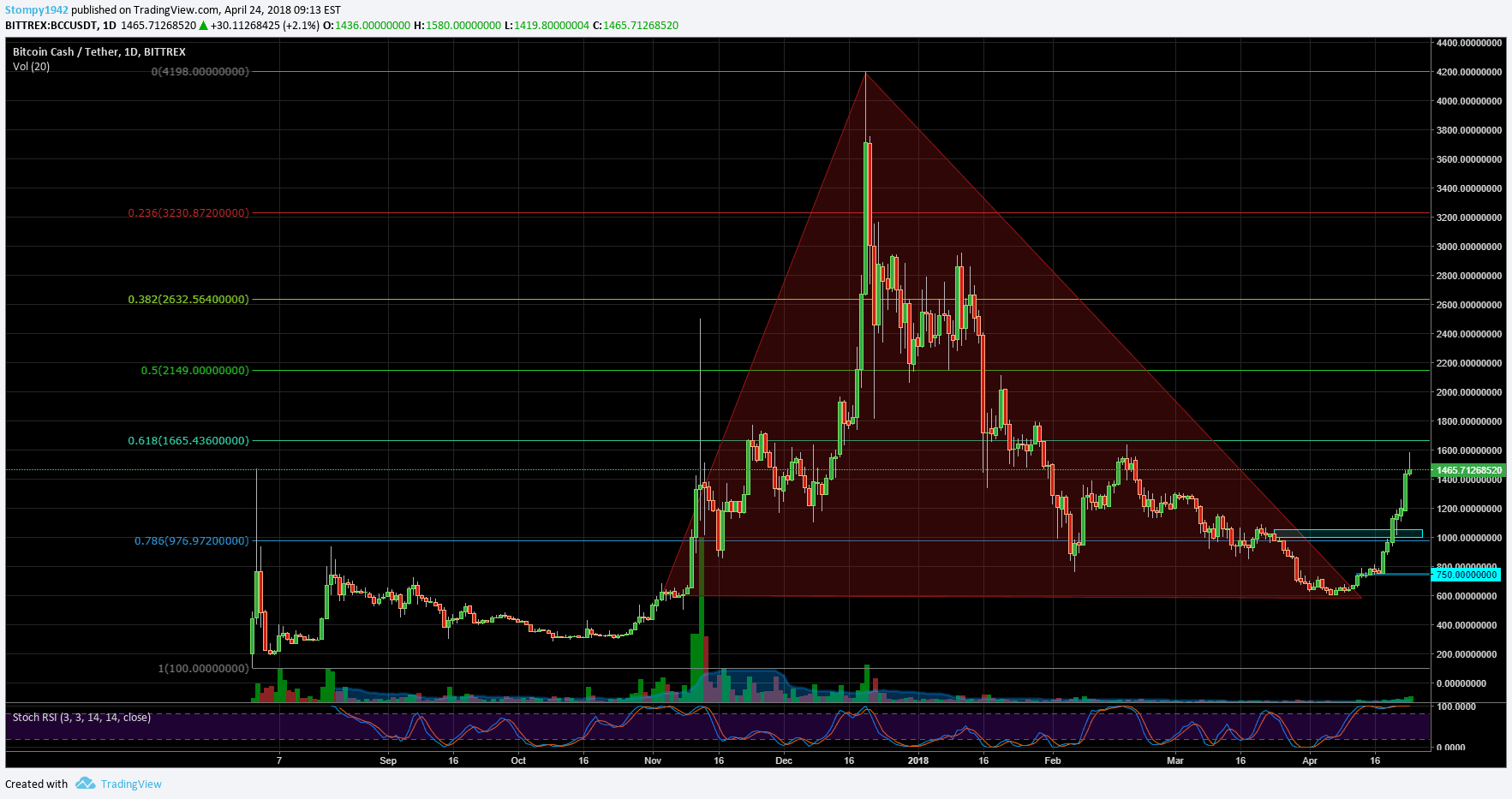 Against Bitcoin the uptrend was staggering. It traded around 0.157 BTC. Support around 0.135 BTC. In this range resistance was at 0.16 BTC. And resistance that have been breached in the past two days, are marked with the yellow rectangle. 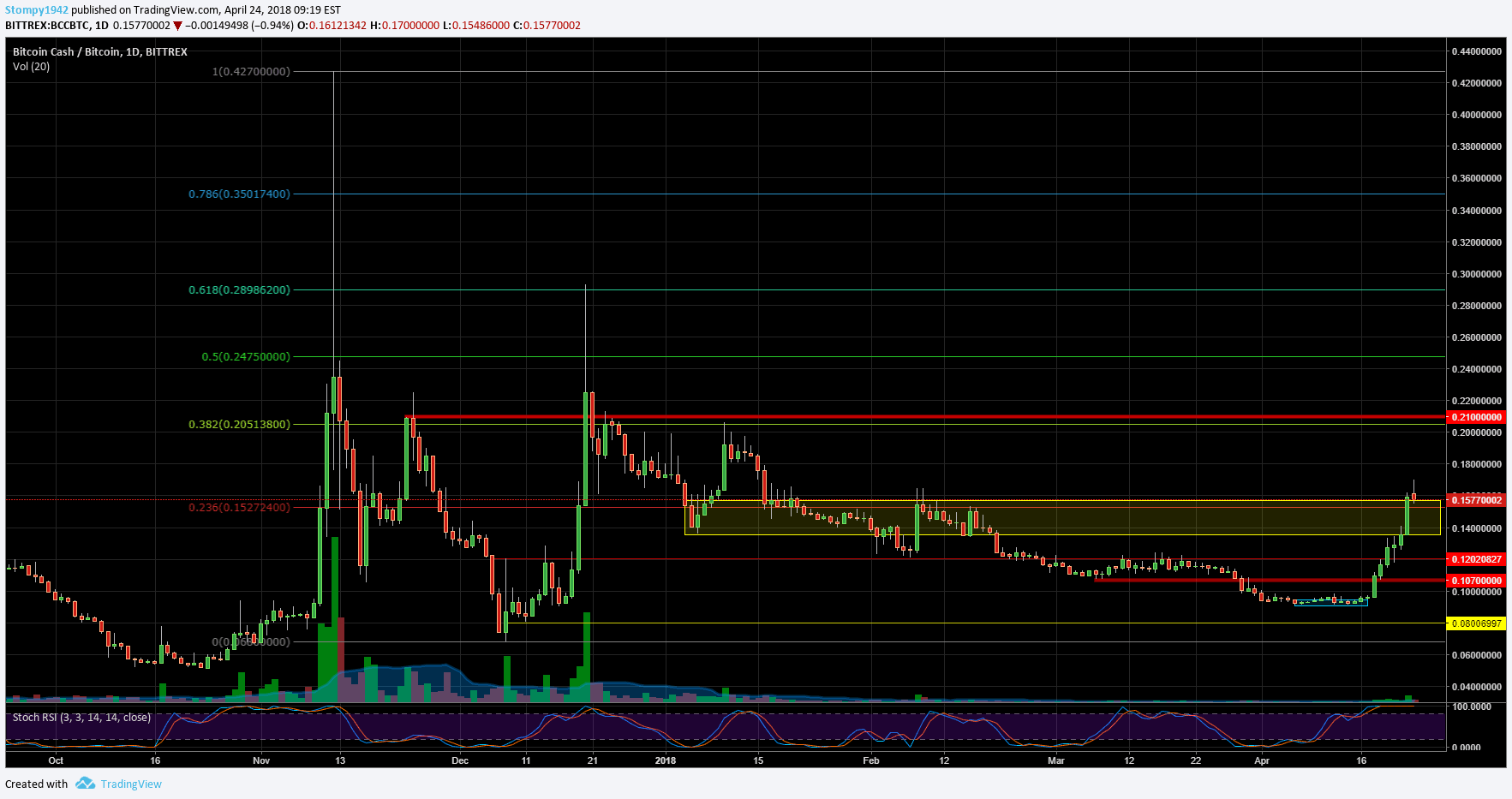 Against the dollar, Lisk is not really traded on large exchanges such as Poloniex. Traded around $12 after the end of a declining trend since the peak in January where it reached $41. It looks like the start of a trend changed last week. Resistance was at $14 with support around $10. 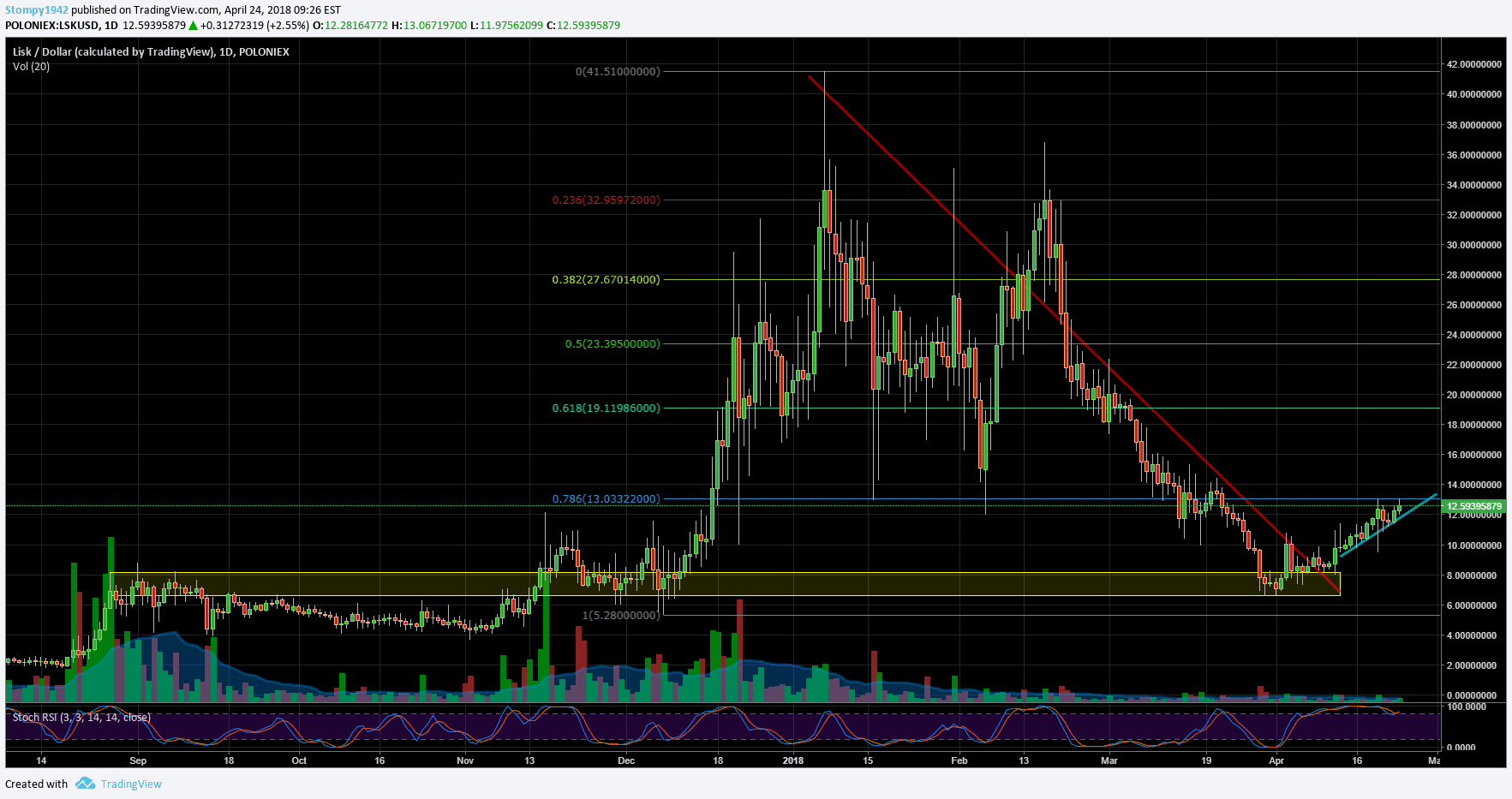 Against Bitcoin, it traded around 0.0013 BTC. There was a 70% correction from the ATH and it looks like a period of storage on a weekly graph compared to the past (marked rectangles in white). Resistance in these, ranges around 0.0014 BTC with support at 0.0012 BTC. 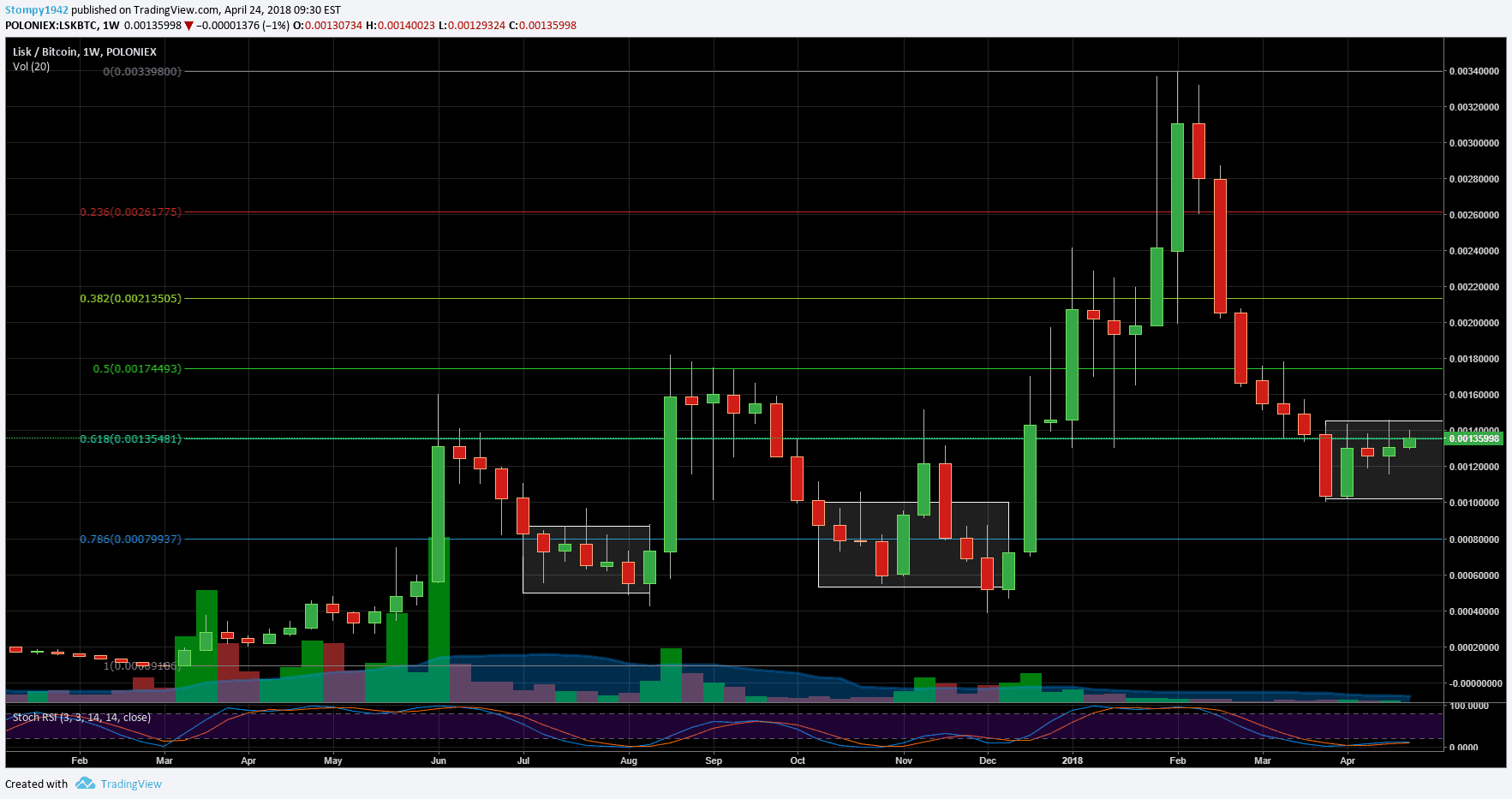 Against the dollar, traded around $5.7. In the last two weeks we saw an increase in trading volume and a trend reversal in Bittrex. Resistance was around $6 and support in this range at 5$. 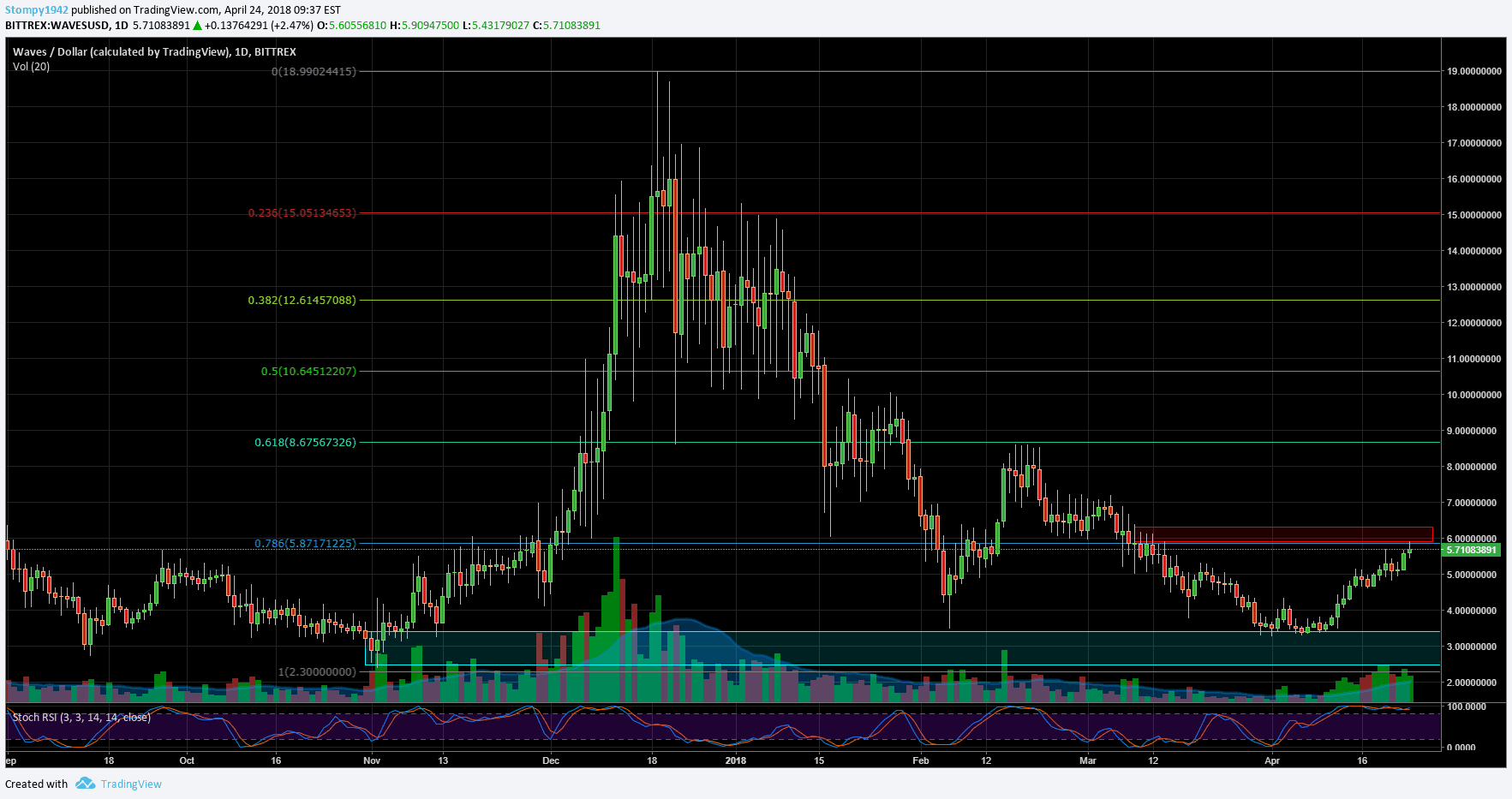 Against Bitcoin, we returned to a graph that we analyzed in previous updates and not much changed. The W is still showing a fairly stable weekly graph compared to other alternative coins in this period. Traded at around 0.0006 BTC with resistance at 0.0007 BTC and support also in this range. 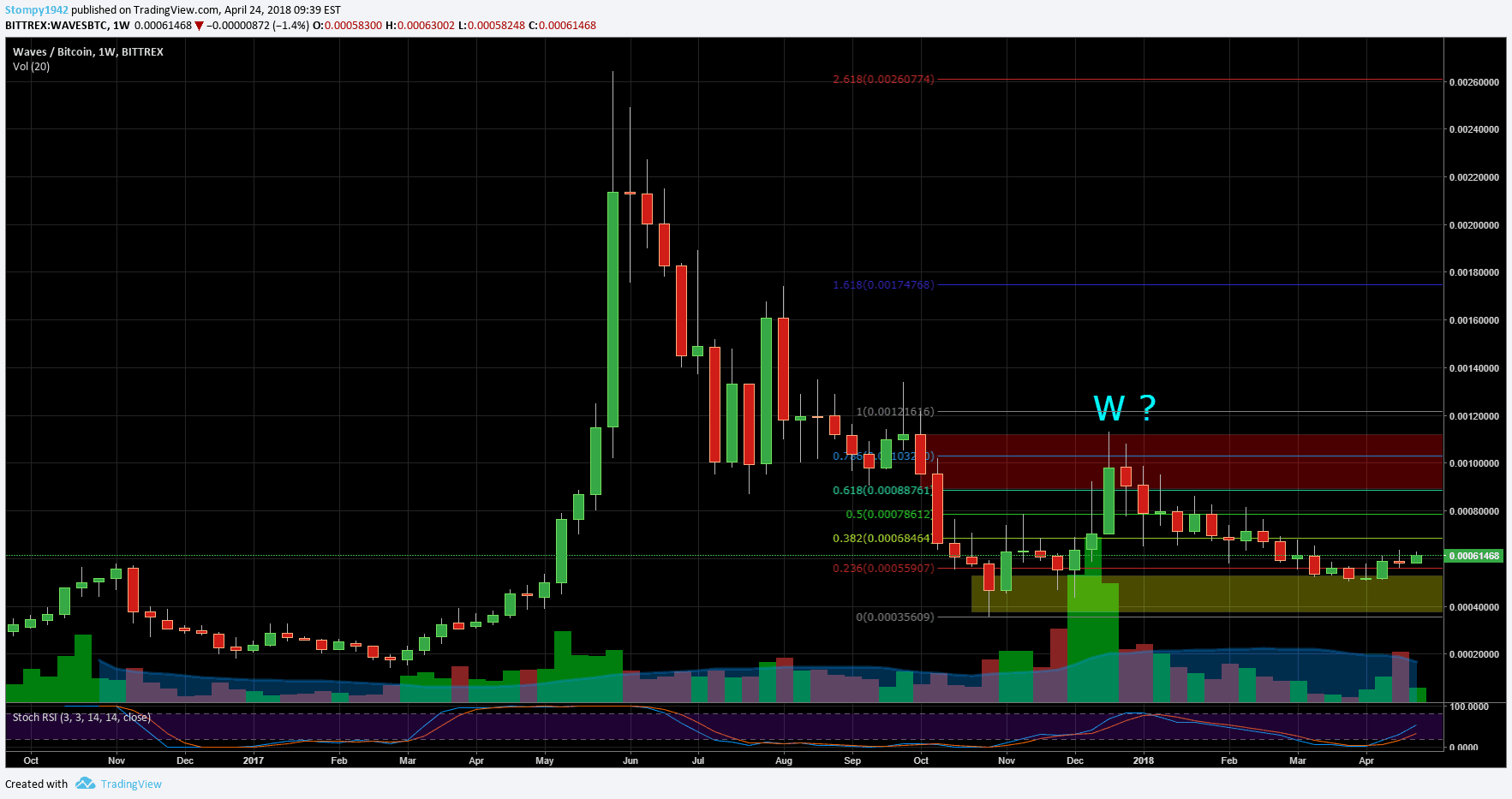