The crypto market continues to break records and the demand for Bitcoin is rising. This increase, together with the announcement by the CME that it will allow trading in future contracts starting on December 18th, led to another increases in the Bitcoin’s value. The increase in demand for Bitcoin was also felt in Localbitcoins platform, where we can see increases in commission rates for the sellers. Considering the similarity between the current situation and the rapid increase in the end of 2013, this time it seems to be a totally different story. The number of Bitcoin exchanges has increased significantly, as well as margin trading options. Back in 2013, it was maily Mount Gox exchange.

The buzz around Bitcoin breaks records as well. The increasing obsession of traditional financial news, surrounding Blockchain technology, along with the CME announcement.

Although the Altcoin markets have recovered recently, it is still a hard time for them. It seems that the market is checking low support levels, and even Altcoins that broke resistance levels, quickly corrected back due to the sharp rise of Bitcoin. We should point out that the dollar value of the altcoins, in most cases, does not reflect their true value. This is because in most cases they are not traded against the dollar (except for leading TOP 20 altcoins such as Ethereum, Litecoin, etc).

In the past few days, a new application was distributed called CryptoKitties (a Dapp), which operates on top the Ethereum network. It has created crazy hype! The game allows the user to collect, produce and trade cards with cats on them. Although the idea may sound a little ridiculous, it seems that the app has starting to gain serious momentum. It also broke the record of the number of transactions with all the applications running over the Ethereum network, including the exchange.

It seems that sharing the application with a number of well-known figures in the community, including Vitalik, the founder of Ethereum, has contributed to it’s astounding growth. This challenges the network in terms of transaction speed. This may be an interesting test for Ethereum developers and the community to overcome.

More in the Altcoins – since our last update, IOTA jumped up by about 100 percent (!). On the other hand, Ripple, ZCash, Ethereum and Bitcoin Cash are in a downward trend against Bitcoin, but there still seems to be some kind of floor and support to hold.

Other Alts such as Einsteinium, Monaco, and Next, have seen sharp increases in the past week. This may indicate the beginning an upcoming “Altcoin season” similar to what we had in January of this year.

Bitcoin is expected to start trading on the stock exchange starting December 18th:

NASDAQ announced that it would allow trading in Bitcoin by first half of 2018.

The Chicago Stock Exchange received approval from the CFTC to trade in Bitcoin and the CME announced that it would allow to trade Bitcoin trade on the December 18th.

The British Treasury expressed concerns about money laundering and tax evasion by means of crypto currencies, and therefore announced that it intended to regulate Bitcoin. They would go about this manner by requiring traders to reveal their identities and report any suspicious activity.

Continuing with this subject: South Korea, on the other hand, is planning a moderate regulation on crypto, seeing the huge market potential. At the same time, the South Korean economy minister announced this week that they have begun to explore new methods of taxing Bitcoin. In this respect, it seems that South Korea is showing a positive line of action. By a federal court order in a California, Coinbase was asked to provide information about all users who traded crypto currencies valued over $20,000 between the years of 2013 to 2015. Coinbase has estimated that it is about 14,335 users.

We have noticed that some banks may have attempted to reduce the hype surrounding Bitcoin. Bank of America issued a warning about the financial instability of the crypto currencies in general, calling out Bitcoin in particular. Bank of France, has also warned of the risks in investing in Bitcoin and Bank of China, warning that “Bitcoin would disappear”.

There was fear of another security breach at Bitcoin Gold.

Cypherium, a new project by former Google, Amazon and Microsoft developers, is working on a Blockchain, which will enable verification of a wide range of transactions.

The volume of Bitcoin trading in India continues to break records, and as a result, local money changes are experiencing unsubstantiated growth.

Due to Bitcoin’s extensive media coverage recently, there have been concerns and claims that this is a Ponzi scheme.

Although there is, of course, quite a bit of positive coverage: Venture capital fund head, Albert Wenger, presents an optimistic forecast that the market value of digital currencies could reach trillions of dollars (as of writing this, the market value is about $ 300 billion). After calling the Bitcoin a fraud two months ago, JPMorgan seems to be changing its approach a little.

In the past week, Bitcoin price has increased by about $2000 from $9850 to $11,850. There, encountered a resistance level for the short term. At the moment, it is difficult to find support, as demand is only growing, and alongside as the price continues in its parabolic movement. The hype is likely to continue until the beginning of the CME trading. 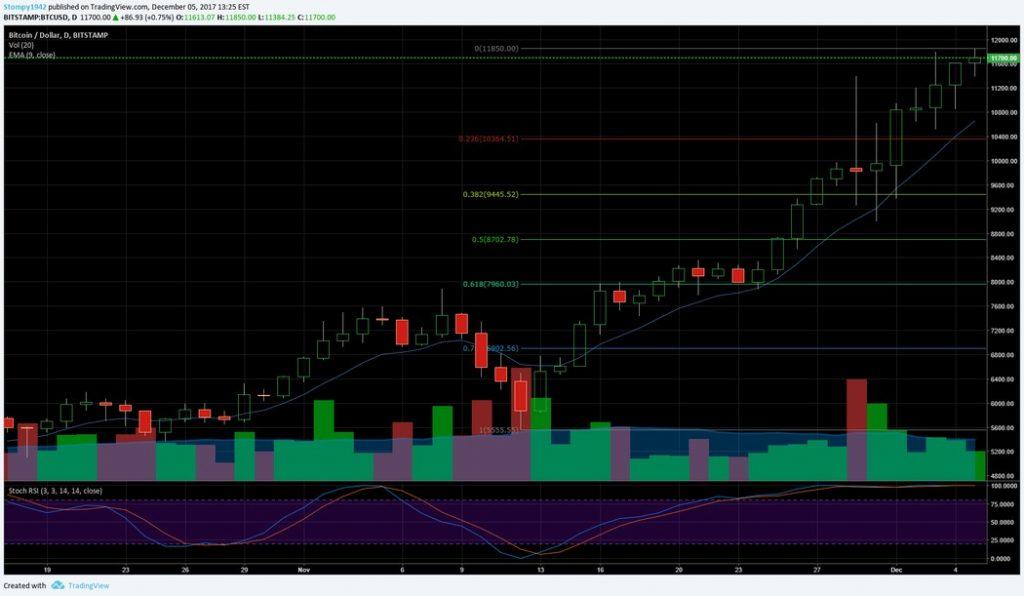 Against the Bitcoin we saw a continuous decline since July this year, we have returned to the support areas around 0.04BTC. Will the support level hold? It is currently traded around 0.039BTC with the resistance areas at 0.47 BTC. 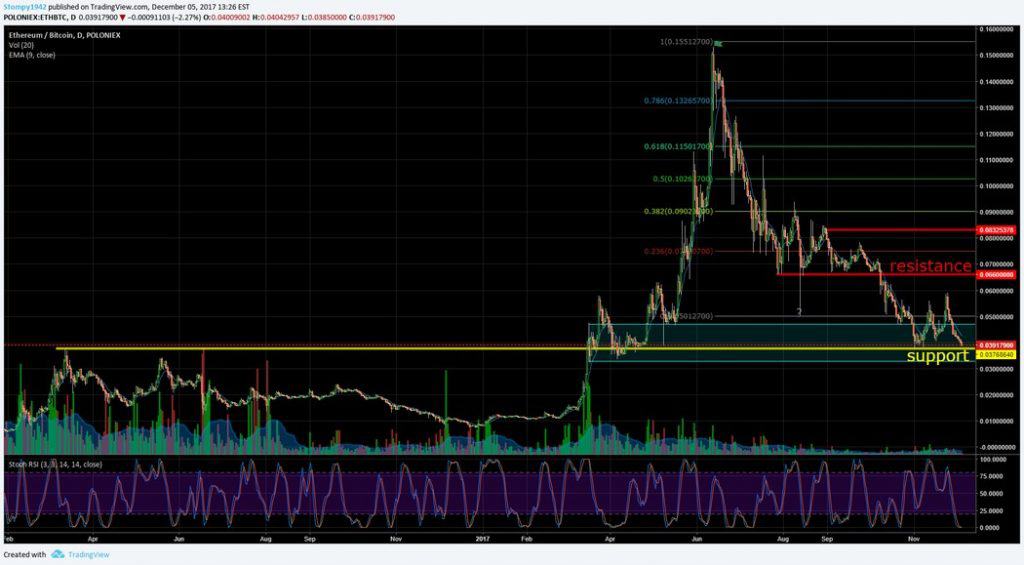 Against the dollar, the rate peaked at $550, breaking the resistance around $500. At the current moment, support lies in the $450 area. Do we know if this support will hold? At the moment, the next stop below is $375. 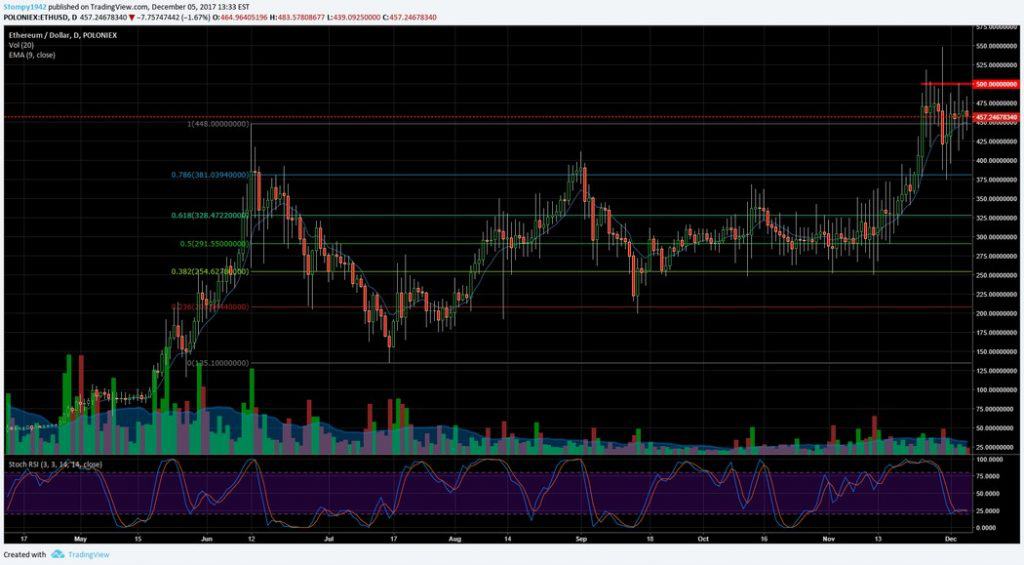 Against Bitcoin – Bitcoin Cash fell last week to 0.13 BTC, breaking the support around 0.14 BTC. The next major support levels are around 0.1BTC. Are we about to hit that floor? 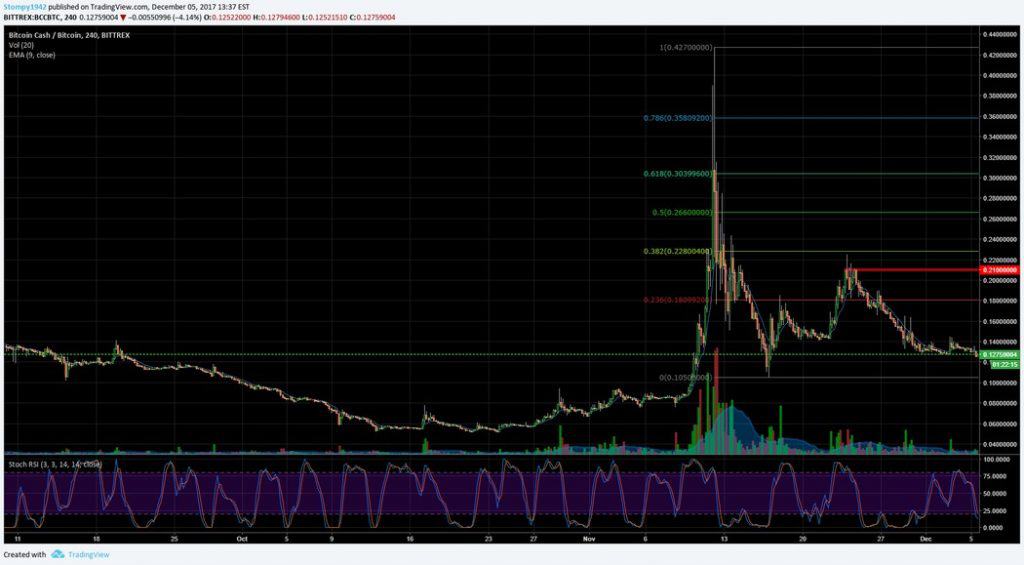 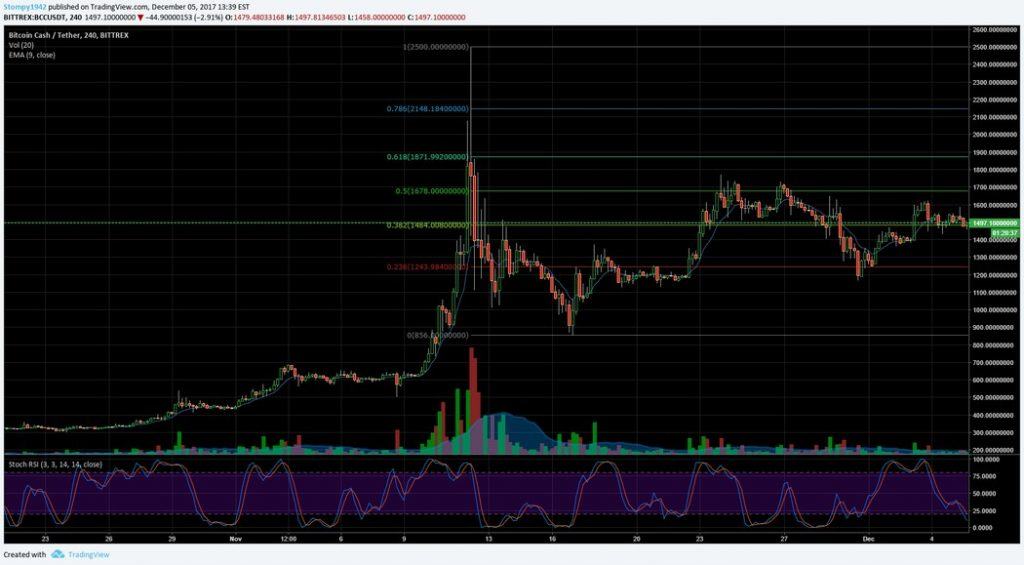 Let’s start with OMG compared to Bitcoin: Since September, when the coin was traded at a peak level of 0.0032BTC, we saw a long way correction that brought it down back to 0.0008BTC levels. In the past few days, the volume of OMG has been increasing and there seems to be support around these price levels. Resistance around 0.0009BTC. 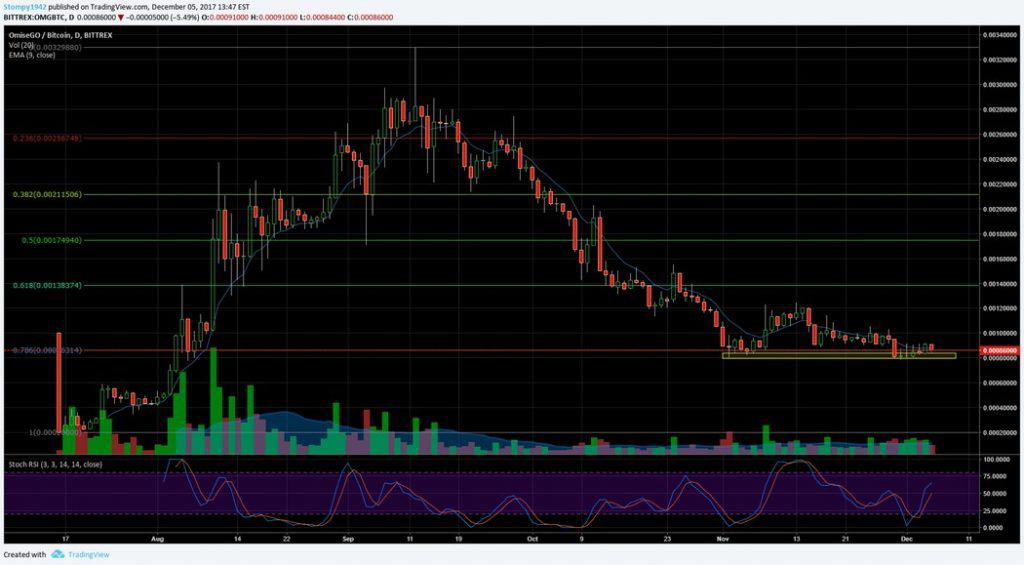 Against the dollar – the story is completely different. OMG vs. USD is in a positive trend with strong support around $6 and trades around $10. Resistance level lies in these areas. 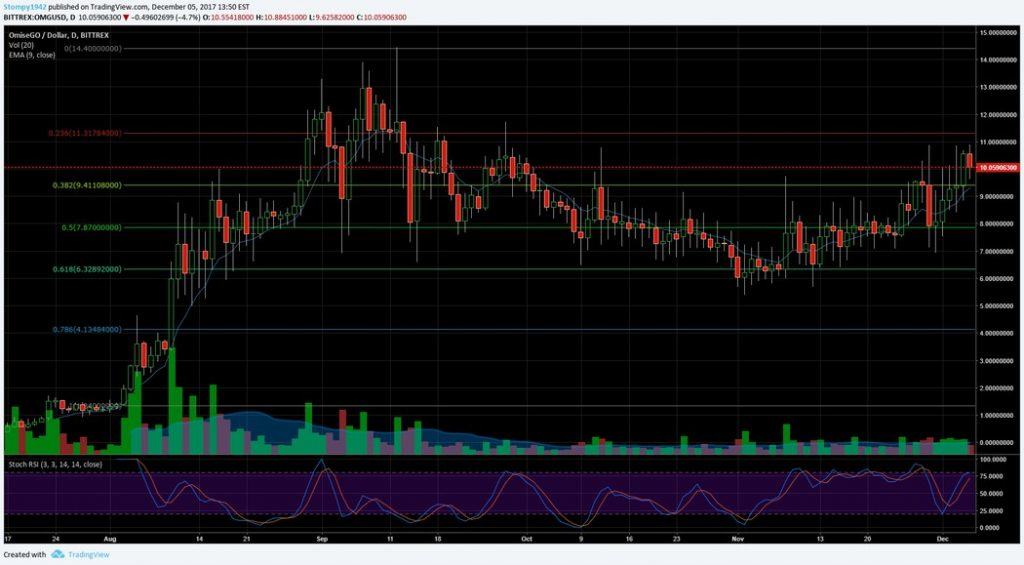 Against Bitcoin – Civic has been in a negative trend since October, but signs of entry of volume last week, brought the price to test resistance levels for the short term, around the 3400 Satoshi levels. Last week, the floor support level was around 2600 Satoshi and resistance lies at 3600 Satoshi. 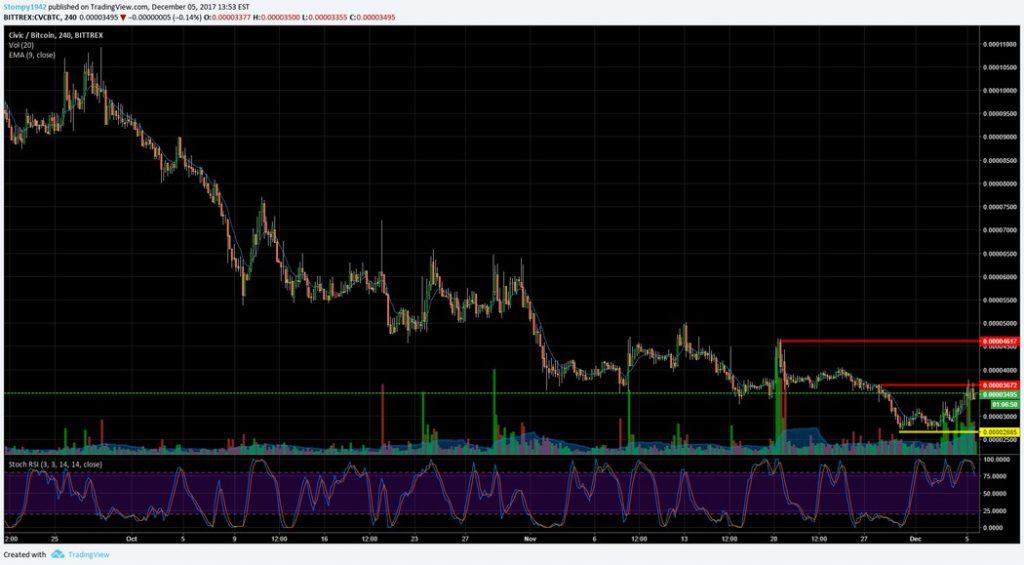 Against the dollar – a sharp rise to areas of 40 cents with a strong support around 25 cents. Resistance levels were being tested in the last 24 hours – at 40 cents. The all-time high is at 77 cents, was reached last August. 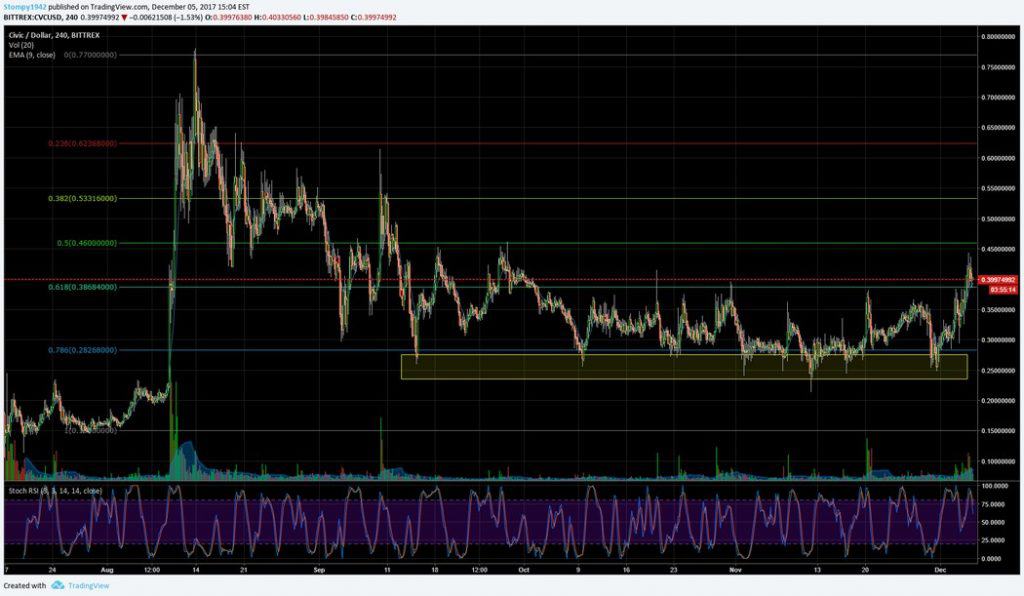