A stormy week has gone by in the crypto market. Bitcoin continues its downward trend and other alt coins are crashing.

The ongoing correction brings with it the usual question of whether and where the turning point will come. It is difficult to say whether the market is nearing the end of the correction and if we rely on past experience, it appears that the market correction has been going on for about two years, and we have not yet been through a year since the last correction began.

Bitcoin is highly speculative and it is still too early to quantify the value of its technology. If and when adoption and mass use of Bitcoin appear to be widespread, only then can its price be estimated more reliably. Until then, market events and trading psychology will continue to cause volatility and possibly an ETF endorsement could trigger another upswing in the near future. This is not financial advice..

In addition, the entire market looks up to the halvening when the quantity of Bitcoin produced from mining is cut by half. In the past, the halvening effected the price of Bitcoin and the next halvening will   happen in May 2020.

If all this is happening, we must be encouraged to remember that despite the market’s decline, the infrastructure continues to be built. It will take time for the market and the general public to learn about the value of decentralization and how it can change the way people conduct themselves, especially about the transparency of the monetary system with blockchain technology.

It is also important to note that the market cap shrinking to a value of 121 billion opens the possibility of large players to manipulate prices. At the same time, the hype of 2017 caught the attention of many institutional investors who are considering their entry into the market. Will they see the decline as an opportunity to buy cheaply or to forget about cryptocurrency completely?? We will not know until the near future.

For altcoins the story is different and the trend is mixed considering the relationship with theUSD. . Most alts suffer because they are traded and measured against Bitcoin and therefore the impact on them is stronger and most of them are in the red. On the other hand, when traded against Bitcoin, some of the alts are actually on the rise, or trading around their floors and do not continue to lose value in relation to Bitcoin. For example, Factom continues its rise of around 50% this week and it is impossible not to pay attention to Bitcoin SV, which slipped to 8th place in terms of market cap, with a 122% rise against Bitcoin last week. It seems that the market is still producing interest, which can stimulate another wave.

In conclusion, the nerve index is rising from the ego war being waged by Bitcoin Cash, the regulation tightening around ICOs and the media that has returned to eulogize Bitcoin as a passing bubble. In the background, the hash rate is declining after two consecutive years of steady increase. But the last word has not yet been said. 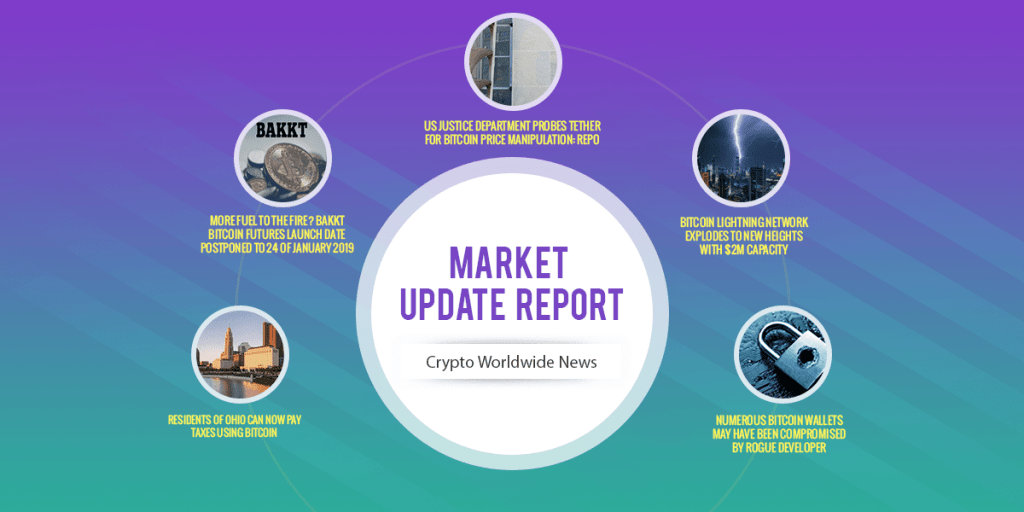 Residents of Ohio Can Now Pay Taxes Using Bitcoin. The Ohio tax department has partnered with crypto payment processor BitPay to become the first state in the U.S. to allow businesses to pay taxes using Bitcoin.

More fuel to the fire? Bakkt Bitcoin Futures Launch Date Postponed to 24 of January 2019.  In the midst of bearish movements, the Bitcoin Futures proposed by startup Bakkt has been postponed yet again, much to the dismay of crypto traders.

Report: US Justice Department Probes Tether for Bitcoin Price Manipulation. Controversial stablecoin Tether was in the news once again, this time for fresh concerns raised by the DOJ that the stablecoin was used to fuel Bitcoin’s massive rise in 2017.

Numerous Bitcoin Wallets May Have Been Compromised by Rogue Developer. Many Copay wallets belonging to payment processor BitPay have reportedly been compromised after a developer updated the source code with malware.

Trading around $ 3700 fragile with support at $ 3600 and seems to be still looking for the floor. There is a trend that is repeating itself in declines and according to the rise in trading volume, it seems that there are those who are starting to buy despite the declines.

Against the dollar it is trading around $107 and support is estimated to be around $100 in the meantime.  And while the market is down, the resistance level cannot be determined.

Against Bitcoin it is being traded around 0.028BTC with support at 0.03BTC broken this week and is leaning on the short term support triangle resistance level at around 0.03BTC.

Against the dollar it is trading around $170 with support at around the $160 resistance at $ 180 and looking downwards. Trading volume slightly rose and it seems that the support will be tested in the coming days.

Against Bitcoin it is trading   at around 0.046BT with support at 0.043BTC in this range and is attempting to breach the failed resistance level    of 0.056BTC and is quickly moving back to the support areas.

Against the dollar it is trading around $ 90, a sharp rise from the support area that marked resistance around $ 110, will it also be breached? It seems that a correction started and support around $ 80 is being tested.

Against Bitcoin it is trading around 0.024BTC with resistance at 0.03BTC in this range it also seems to be testing support and it is down at 0.02BTCC as the sharp rise and fluctuations are increasing and the currency seems to be of interest to traders.

Against the dollar it seems that Litecoin correction is even stronger than Bitcoin correction. From the peak of $370   it is now trading at around $30. We noticed that the volume of transactions increased significantly in the past week, yet the rate holds around $30. Fragile support in these areas.

Against Bitcoin the situation is different and the floor for this range appears to have been set at 0.007BTC trading resistance around