Cannabis stocks turned bullish across the U.S. and Canadian stock exchanges after New Jersey’s Democratic Governor Phil Murphy announced on Tuesday that legislators in the Garden State have reached a deal on the legalization of Marijuana.

The talks and negotiations have been going on for months and finally there is a possibility that on March 25, a vote will be held for both houses in New Jersey that will pave the way for Governor Phil Murphy to sign it into law, making it legal for weed to be taxed and sold in the state.

While Cannabis remains illegal at the Federal Level, so far ten states and the District of Columbia have made it legal to use weed for recreational purposes and Governor Phil Murphy’s announcement will further open up one of the largest Cannabis markets in the largest economy in the world, the U.S.

The bill will likely impose an excise tax of $42 per ounce of weed and it will be the cultivators’ responsibility to pay the tax to the revenue services. However, the bill will include certain clauses that will benefit local governments like municipalities and townships. As 2% of tax will be passed on to municipalities, where cities and townships hosting the retailers selling the products would receive a 3% tax on products sold in their jurisdiction.

While New York’s Governor Andrew Cuomo said earlier in the week, on Monday, that cannabis legalization may not be included in his budget for the coming fiscal year as lawmakers are trying to ensure people of color are guaranteed a share of the legal market.

However, with New Jersey legalizing weed, the chance of passing a similar bill in New York just went up significantly. Hence, investors in Cannabis stocks turned optimistic about the growing market in two of the largest state economies in the U.S., bidding the stock prices of major Cannabis cultivators higher on Tuesday.

Cannabis Stocks Had a Field Day

The news regarding the possibility of a bill legalizing weed in New Jersey pushed stocks of almost all Cannabis companies in the U.S. and Canadian exchanges higher on Tuesday. Among the notable gains, Harvest Health & Recreation Inc. (HRVSF) went up by 1.22%, followed by a 0.77 % increase in market capitalization of Sol Global Investments Corp. (SOLCF). 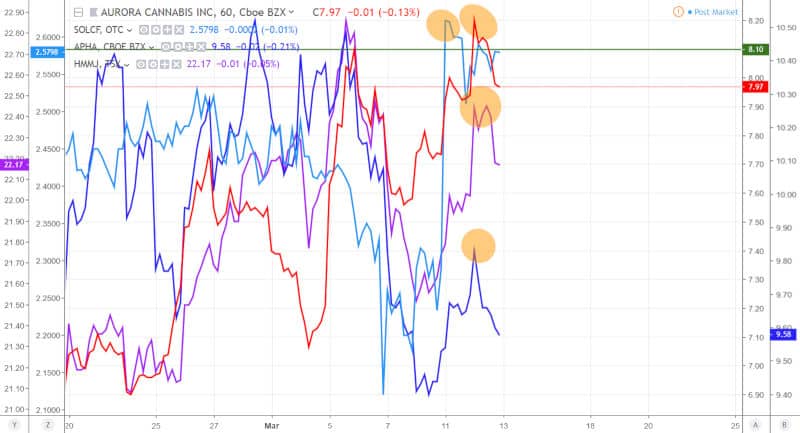 It was a no-brainer that Marijuana stocks will turn bullish if a major U.S. State like New Jersey moves forward to legalize pot uses. The enthusiasm among investors will not be sustainable if lawmakers take too long to resolve the issue of giving preference to the black community as they have disproportionately suffered the under the strict law against pot and due to the War on Drugs policy of previous administrations.

Having said that, it was great news for the Cannabis industry and New Jersey’s lead will act as a catalyst for leaders in a number of states to push for legalization in their respective jurisdictions.