This week was nothing if not tumultuous for Bitcoin. Last Friday, its price dropped a massive 40%, recording one of its steepest losses in history. However, throughout the past few days, Bitcoin managed to recover nicely, as it’s currently trading at above $6,000.

One thing worth noting amid this crisis is the fact that Bitcoin, unlike traditional assets, held up entirely alone. It is still a largely unregulated asset, and as such, there are no safety nets around it. During the week, when the S&P 500 and the DJI were charting losses upwards of 7%, stock exchanges saw their circuit breakers activated, and trading was halted for 15 minutes multiple times. This gave investors a chance to evaluate and reposition.

No such measures exist with Bitcoin, at least not to this extent. BTC has absolutely no safety nets, and it receives no support from institutions, unlike traditional stock markets. And still, Bitcoin managed to overcome and is already recovering nicely, bringing the entire market up with it.

Altcoins are also bouncing back, with all large-cap cryptocurrencies charting double-digit increases during the past few days. Still, there is a long way to recovery. However, with Bitcoin’s halving in less than two months now, the community remains somewhat optimistic.

At the same time, the situation with the novel coronavirus (COVID-19) continues to escalate in Europe and the United States. While China seemingly has everything under control, countries around the world are struggling and employing serious social distancing measures to contain the virus.

Thanks for subscribing, you will get your first report in the next hours!
ADVERTISEMENT

It remains unclear to what extent this virus will spread. It’s also very exciting to see if Bitcoin and other cryptocurrencies will be able to decouple from traditional assets and prove themselves as the safe-haven asset that many tout them to be. 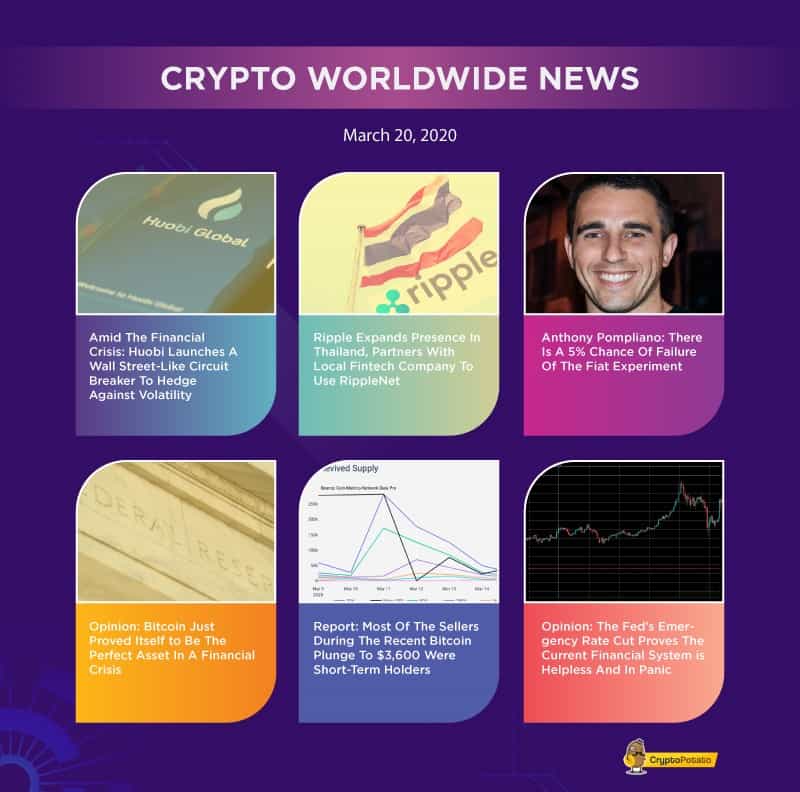 Amid The Financial Crisis: Huobi Launches A Wall Street-Like Circuit Breaker To Hedge Against Volatility. Popular cryptocurrency exchange Huobi is launching a feature that resembles Wall Street’s circuit breakers. The new feature aims to decrease traders’ positions gradually in times of high volatility rather than liquidating them right off the bat.

Ripple Expands Presence In Thailand, Partners With Local Fintech Company To Use RippleNet. Ripple continues its worldwide expansion. It partnered up with a local Thailand-based fintech company that will use RippleNet to ensure quicker and cheaper international money transfers. The announcement comes after Ripple had already partnered up with one of Thailand’s oldest banks.

Anthony Pompliano: There Is A 5% Chance Of Failure Of The Fiat Experiment. Well-known Bitcoin proponent Anthony Pompliano explained how he thinks the government can handle the current financial meltdown. He also said that these measures present a risk for a failure of the “fiat experiment” as the Feds have to print new money to weaken the US dollar.

Opinion: Bitcoin Just Proved Itself to Be The Perfect Asset In A Financial Crisis. Despite Bitcoin’s recent crash, it’s worth pointing out that it held on the massive selling pressure without any help from the governments, unlike traditional markets. It’s already up a substantial percentage from its latest drop, and it continues to demonstrate that it can operate freely without any regulatory interventions.

Report: Most Of The Sellers During The Recent Bitcoin Plunge To $3,600 Were Short-Term Holders. The latest sell-off in Bitcoin, which led to the catastrophic crash in its price, was caused by short-term holders, rather than long-term ones, a report indicates. Accounts who held to their BTC for a long period of time didn’t sell, despite the massive drop.

Opinion: The Fed’s Emergency Rate Cut Proves The Current Financial System is Helpless And In Panic. The recent crash in traditional financial and stock markets called for serious measures from the US and other governments. However, it also showed that economies might not be prepared for a shakedown of the kind as their measures seem somewhat desperate.

This week we have a chart analysis of Bitcoin, Ethereum, Ripple, Bitcoin Cash, and Chainlink – click here for the full price analysis.