While Bitcoin remains rangebound, to an extent, last week had some very exciting trading days. Towards the beginning of the week, BTC was trading at around $9,200 until last Saturday when it suddenly dropped and touched a low of $8,833, which remains the lowest point for the week. From there, BTC recovered and even made a failed attempt to climb back above $9,300.

As it came to no fruition, the cryptocurrency experienced another sharp decline, losing $300 in minutes yesterday. It consolidated around $9,100, where it’s currently trading. Going forward, if bulls are to retake control of the market momentum, they’d first have to overcome $9,260. From below, $9,000 is shaping up as a strong support level from both a technical and psychological perspective.

The week’s center spot, perhaps to no surprise, was entirely taken by altcoins in the DeFi space. The sector is flourishing as yield farming continues. With over $1.77 billion of value locked in various lending and borrowing protocols, the sector is currently at its highest point.

Some of the most notable gainers in the field include Kyber Network’s token, KNC, that’s up 62% this week alone. Another project that’s gaining traction is Augur, whose token, REP, is up 11% in the past seven days. Synthetix Network’s SNX is also up almost 30% during that period.

Interestingly enough, the project that seemingly catalyzed the DeFi hype, Compound, sees its COMP token down 30% since last Friday as it currently trades at around $177.

It’s exciting to see where the market will head next as Bitcoin hasn’t had a wild move in a while now. 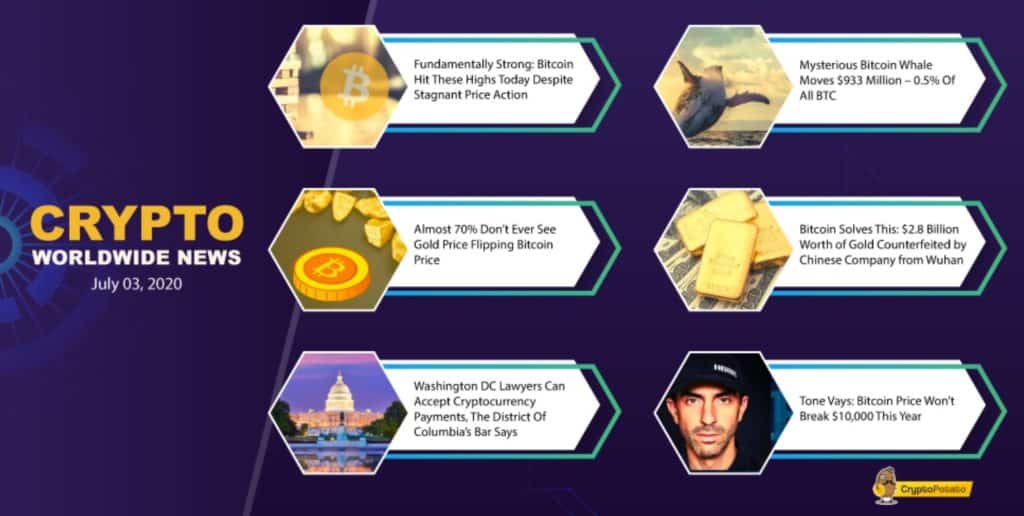 Almost 70% Don’t Ever See Gold Price Flipping Bitcoin Price. According to a recent poll initiated by the popular Gold proponent, Peter Schiff, 70% of people think that the price of an ounce of gold will never surpass that of one bitcoin. As opposed to that, only about 10% of the participants believe that it will take less than one year.

Washington DC Lawyers Can Accept Cryptocurrency Payments, The District Of Columbia’s Bar Says. In an ethics opinion published by the District of Columbia Bar Association (DCB), it became clear that lawyers who operate in the US capital, Washington DC, can accept cryptocurrencies as a legal method of payment. This makes DC the fourth US jurisdiction to allow attorneys to receive crypto as compensation for their services.

Mysterious Bitcoin Whale Moves $933 Million – 0.5% Of All BTC. What used to be the largest unknown Bitcoin wallet did a transaction worth almost $1 billion of BTC a few days back. The amount was split into two separate addresses, and the whale paid a transaction fee of only $0.48 for moving the funds.

Bitcoin Solves This: $2.8 Billion Worth of Gold Counterfeited by Chinese Company from Wuhan. Recent reports indicated that at least some of 83 tons of gold bars, used as collateral for loans in China, turned out to be nothing but gilded copper. The total value of the fake fold is estimated to be upwards of $2.8 billion. This highlights one of the inherent qualities of Bitcoin – the fact that it can’t be counterfeited.

Tone Vays: Bitcoin Price Won’t Break $10,000 This Year. According to a popular cryptocurrency analyst, Tone Vays, Bitcoin will spend most of 2020 trading in the range between $6,000 and $10,000. He also believes that short-term and indecisive breaches of $10,000 are insufficient.

This week we have a chart analysis of Bitcoin, Ethereum, Ripple, Kyber Network, and Bancor – click here for the full price analysis.